With offices in Phoenix and Austin, Landscape architect Christy Ten Eyck understands water-resourceful designs. In her new home garden in Austin, she renovated its footprint to catch water, restore wildlife, and find soulful peace in wanders and wonders.

When should I prune clumping grasses?

These grasses go dormant in winter and brown up their foliage. In spring, they reemerge with new lush growth. February is a good time to cut them back.

If your ornamental grasses go dormant early and you can’t stand the look of the messy brown leaves, prune them as early as late fall or early winter. But if they have attractive seed heads or some other nice quality while they’re dormant, you can leave them alone until as late as the end of February.

Also, overwintering butterflies may harbor in their leaves for warmth. Small animals may also seek protection in them and some birds will eat the seed heads of many species.

The smaller the plant the easier it will be to prune, and you’ll need to cut straight across, leaving most grasses at a height no more than 6 inches from the ground. If the plant is small, it won’t be too hard to do this with a pair of pruning shears while holding the grass with one hand.

But as the plant gets larger, you may need to use a larger pruning tool, such as a pair of hedge trimmers, or even an electric trimmer, which will allow you to us both hands to cut in a flat plane, parallel to the ground. If the grass is very large and thick, you may want to tie the leaves into one or several small bundles, using masking tape or garden twine, to keep it in place while you prune.

Purple fountain grass and other cold-tender pennisetums may completely die in harsh winters. If there is no sign of life, dig them up and re-plant after the last frost date. 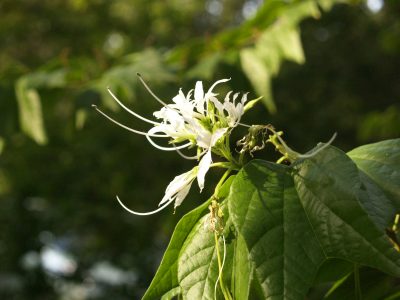 This small tree is a great choice for attracting butterflies and hummingbirds to your garden. It gets only 4 to 8 feet tall and spreads to as much as 6 feet wide. With this growth habit, Mexican orchid tree is really more of a shrub, and it looks beautiful when allowed to grow like a shrub, with fuller foliage and more flowers, so be sure to give it plenty of space to spread out. This plant can be a little frost-tender, so place it in a protected spot near your home, in a southern exposure perhaps, where the walls of your house might radiate a few extra degrees of warmth during the winter. But even though Mexican orchid tree likes to be a little warmer when it''s cold out, it doesn''t easily tolerate the intense heat of our full summer sun, so choose a spot that''s protected from the harsh afternoon rays, or one that gets bright, filtered light all day. And if you're a real butterfly fan, be sure to plant this tree close to a window or porch, where you can sit and enjoy the fluttering all summer long. Bauhinia is covered with large and showy, but at the same time very delicate, pink or white flowers, from summer through early fall. Even out of bloom, its form and intriguing leaves are a real showoff as an understory accent. Mexican orchid tree is normally deciduous, but may freeze to the ground in harsh winters. If it does freeze, simply cut back the dead trunks when you begin to notice new growth in the spring, probably be sometime in March. And an important quality for many of us, Mexican orchid tree is listed to be deer resistant.