Express Yourself with Garden Art

Express yourself through garden art with Chris Smartt’s fun ideas from Sol’stice Garden Expressions. On tour, Irene Anderson turns a maintenance-hound swimming pool into a natural habitat pond. Daphne answers: Is it okay to pound a nail into a tree to hang a plant? Her pick of the week is fall-blooming, bee and butterfly-loving Queen’s wreath. John goes inside to propagate house plants.

Tired of dealing with a swimming pool? See how this family turned their Wimberley pool into a native habitat pond. Irene Anderson and husband John McMillan worked with their children to transform a chemical maintenance-hound into a natural home for wildlife of all kinds. Irene, partner with her son Chris Smartt at Sol’stice Garden Expressions in Dripping Springs, planted its borders with native and adapted drought-tough plants to attract even more wildlife. Chris sprinkles hand-made art throughout to enhance the total outdoor experience all year.

Express Yourself with Garden Art

Can I put a nail in my mature tree to hang a feeder or plant?

Thanks to Nancy Smith for this great question! The answer is simple: yes; hammering a nail or two into a mature tree is fine. The tree will barely even notice, as the only living tissue is a thin layer of cells between the external bark and the internal wood. The tree will easily compartmentalize this small wound and will continue to grow just fine, so hang away, Nancy. I wouldn’t nail into a very young tree, though. 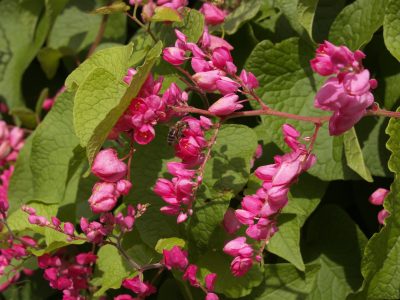 Queen's wreath, also known as coral vine, is a beautiful, sun-loving vine that can also take a little shade. A great addition to any wall or trellis, it can easily spread to 20 feet wide and, with good support, twice as high. You might spot it even climbing up telephone poles or other urban structures! It grows very quickly, making it a nice choice to cover up a bare wall or block an unsightly view. But this rapid growth can be challenging to keep in check, so coral vine is sometimes labeled aggressive, and is best avoided in landscapes adjacent to natural areas. Because of its rambling habit, Queen's wreath should be given plenty of space to roam. Although it may be deciduous in warmer winters, it's more often perennial in Central Texas. Because it grows so rapidly, shearing it to the ground in winter is recommended. In cold winters, it will naturally freeze back, but will return after cutting. It will very quickly emerge from underground tubers in the spring, and will be back to its full stature in almost no time. Although you should prune to shape it and keep it in bounds, heavy pruning will remove the flower buds, and believe me, you don't want to rob yourself of the show-stopping floral display in late summer. The relatively large, light green, heart-shaped leaves are also quite pretty, but when queen's wreath is in full bloom, you likely won't even notice that it has any leaves at all! Flowers are normally rosy pink, but light pink and white varieties may also be found. Bees and butterflies will also flock to its late summer to fall flowers. A native to Mexico, coral vine is often found in heirloom gardens in the Gulf South, and the white flowering variety looks especially striking when planted alongside red roses. Trellised or arbored climbing roses can also serve as support for queen's wreath vine, creating a stunning combination that makes a bold statement in any garden. This vigorous vine is also very drought tolerant, thriving just fine on once a week irrigation during the driest, hottest of times.