These gardeners are really on top of things with rooftop fruits and vegetables! Another rooftop features succulent plants against a lakeside view. Bedrooms even open to balconies filled with rooftop succulents. Contemporary architecture, architectural plants, and organic gardening come together with designer Patrick Kirwin and project architect Thomas Tornbjerg of Bercy Chen Studio.

Why did my rock rose seed out with white flowers, rather than pink?

Great question, Laura! She wants to know why her rock rose (Pavonia lasiopetala), which has been in her garden for years and has pink flowers, suddenly seeded out with white flowers.

This plant generously reseeds for her, so last spring, she moved three of the seedlings to brighten up a semi-shaded area. One of them bloomed pure white!

What could have caused this and how can she propagate it to generate more of these gems? Well, Laura, the answer is in genetics. White flowers are actually recessive in rock rose, with pink being the most common color. But occasionally, the genes cross, thorough pollination, in such a way that both parents contribute the recessive white-flowering gene, instead of the pink-flowering one.

That recessive white flowering gene may or may not appear again anytime soon in your seedlings, but the plant that produces white flowers now should always produce white flowers.

You can isolate the white-flowering plant, perhaps in a container in a greenhouse, and pollinate it with its own flowers, which would give you a better, although not 100%, chance of producing more white-flowering seedlings. The key would be complete isolation, since you wouldn’t be able to protect the plant from stray pollen from the “normal” rock rose any other way. And even though there would be no way of knowing if the seedlings would ultimately have white or pink flowers until the flowers were actually visible, this sounds like a fun experiment, and worth the effort, to get more of these plants.

You can also propagate it from cuttings, which will be easier if you can’t isolate the plant. According to Jill Nokes, author of How To Grow Native Plants of Texas and the Southwest, take softwood tip cuttings in summer through fall. They should be 3-6 inches long and cut just below a node. She recommends taking cuttings with a thicker diameter. 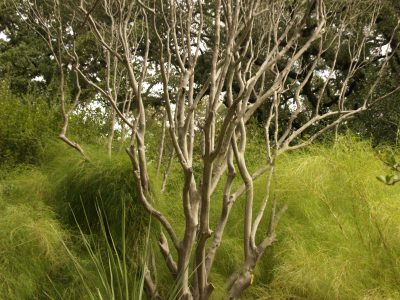 Texas persimmon is also called black persimmon due to the color of the ripened fruits. This wonderful little native tree is beautiful and simply striking in the landscape. It has a beautiful pale gray bark that begins to flake off once it reaches maturity, much like a crape myrtle. Although I called it a small tree, it can actually get quite large with adequate water and sunlight, up to 20 feet tall. But Texas persimmon could just as easily be referred to as a shrub, especially if used as an understory plant under cedar elms and live oaks. Since it does perform well under other trees, it makes a good choice for potentially-challenging, shady areas of your yard. It's amazingly drought-tough, surviving even the toughest of hot, dry Central Texas summers on very little supplemental irrigation. It's also a great wildlife plant, providing both food, with its gorgeous black fruit, and shelter for birds and small mammals. If you prefer less of a "wild" look, you can prune Texas persimmon to raise the canopy and make it less shrubby. Be aware that there are both male and female plants, so if you want the fruit, you need to purchase a female. But if you'd rather not attract wildlife and clean up the mess, ask the nursery for a male plant, although those are less commonly found. But you'll probably want the fruit, because it is delicious! Lamar Hankins shares this jam recipe that tastes like blackberries!