Looking for ideas with drought-tolerant, deer-resistant plants or stormwater control, rainwater collection, and outdoor living? Designer Casey Boyter and Patrick MacRae from The Garden Conservancy preview Austin’s Open Days November 2 tour that gathers designs from classic to contemporary. Get the story behind the tour’s east Austin bungalow makeover that upped its romance and habitat highway with contemporary adds for outdoor living and office space in a renovated airstream. Owners Rita Little-Byrd and Keith Byrd worked with Billy Spencer and landscape architect Shaney Clemmons for polishing details to host Rita and Keith’s at-home wedding. Daphne explains what “drought tolerant” really means and when to move citrus plants in containers or in garden beds. Herb ‘n Cowgirl Ann McCormick demonstrates how to dry garden herbs for use all year.

Tucked into east Austin, Rita Little-Byrd and Keith Byrd’s diminutive house built in 1925 hasn’t changed its footprint; it just upped its romance and habitat highway. Over 10 years, Keith worked on both home and garden, and built the cedar and metal post fence. He remodeled a trailer and shipping container in back for office and storage space. Then he and Rita decided to get married at home. To pull together his ideas, he called on long-time friend Billy Spencer of Spencer Landscape Company. Landscape Architect Shaney Clemmons with Shademaker Studio brought her vision into the collaboration for outdoor living.

What does “drought tolerant” mean & when to move citrus plants?

We often get asked about the term “drought tolerant,” which does not necessarily equate to “low-water-use.” Plants that are “drought tolerant” are able to withstand prolonged periods without rainfall or supplemental irrigation. But to do so, they may go into dormancy, similar to how they do in winter, hunkering down until, hopefully, the situation improves.

This is why during the hottest, driest of times your warm-season lawn will turn yellow, and you may notice healthy, well-established live oak trees dropping leaves. But elevated temperatures and lack of rainfall aren’t the only factors that influence whether a plant is considered “drought tolerant.”

Soil type and seasonal periods of heavy rain will also have an effect. Climatic factors interact in complex ways and are less predictable in recent years than they were historically, which means that we have to pay more attention to our plants, watching for signals that they may need a little extra water to get through the summer, or we may choose to allow them to die back for a bit, and remain patient while they naturally look a little less attractive.

As we approach the first frost date, Brian Tabone asked a great question: can he move his container lemon tree up to a larger pot? And should he fertilize it now? He’s got a greenhouse where he can keep it over winter.

Since the tree currently has fruit, I would suggest waiting to transplant until just after harvest. You should also wait to fertilize. Citrus trees require regular supplemental fertilization when putting on new leaves and during bloom, which means monthly from early spring up to about a month before the listed first frost date for your area.

Our plant this week is Lindheimer muhly, an ornamental clumping grass that was recently awarded Texas Superstar status. Dr. Brent Pemberton, of Texas A&M AgriLife Research, reports that this drought-tolerant species has been shown to perform outstandingly across a wide spectrum of climates, making it well suited for landscapes across Texas, and beyond.

It’s deer resistant, adapts to various soil types, and is drought tolerant. Lindheimer muhly is considered a “medium water use” plant, especially in sandy soils, meaning that it requires regular watering when temperatures are elevated and rainfall is scarce. But it can also be planted in rain gardens or seasonally moist areas, as long as it’s given good drainage.

It grows to about four feet wide and equally as tall, but will be about a foot taller when blooming in fall. Its characteristically narrow leaves, and feathery, swaying seed heads soften our landscapes, providing interest when many other plants are dormant.

Lindheimer muhly performs best in full sun, but tolerates light shade, and in mild winters will be semi-evergreen, providing habitat for over-wintering butterflies. Cut back in late winter or early spring, when you begin to notice new growth emerging at the base. 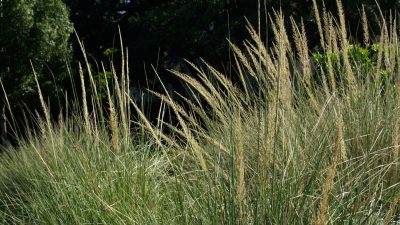 Lindheimer muhly's a native, ornamental clumping (or bunch) grass awarded Texas Superstar status. Dr. Brent Pemberton, of Texas A&M AgriLife Research, reports that this drought-tolerant species has been shown to perform outstandingly across a wide spectrum of climates and soils, making it well suited across Texas and beyond. And, it's deer resistant! Lindheimer muhly is considered a “medium water use” plant, especially in sandy soils, meaning that it requires regular watering when temperatures are elevated and rainfall is scarce. 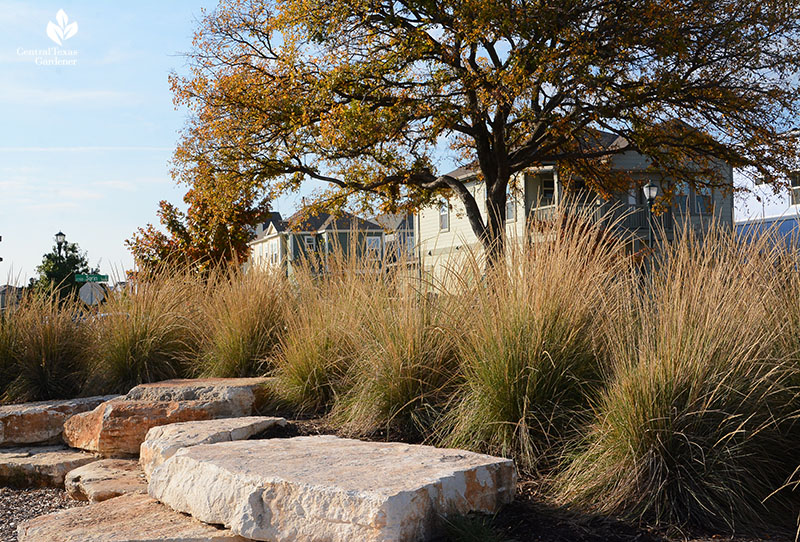 But it's also a valuable addition to rain gardens or seasonally wet areas to help stormwater infiltrate the soil. 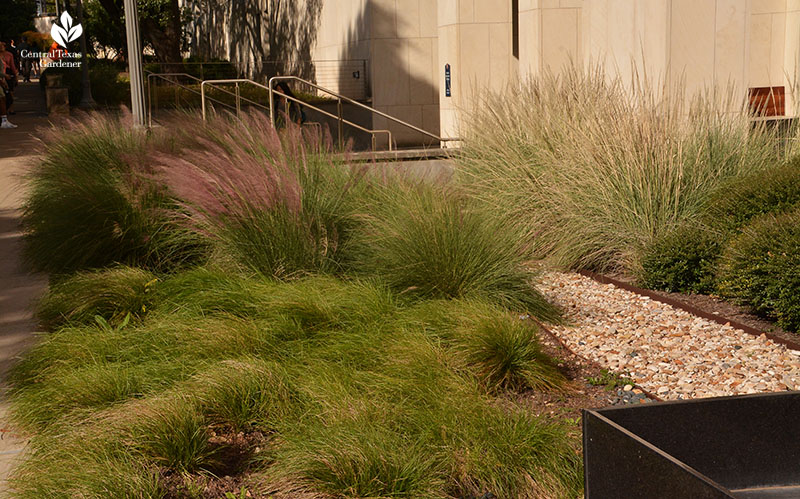 It grows to about four feet wide and equally as tall, but will be about a foot taller when blooming in fall. Its characteristically narrow leaves, and feathery, swaying flowers and seed heads soften our landscapes, providing interest when many other plants are dormant. 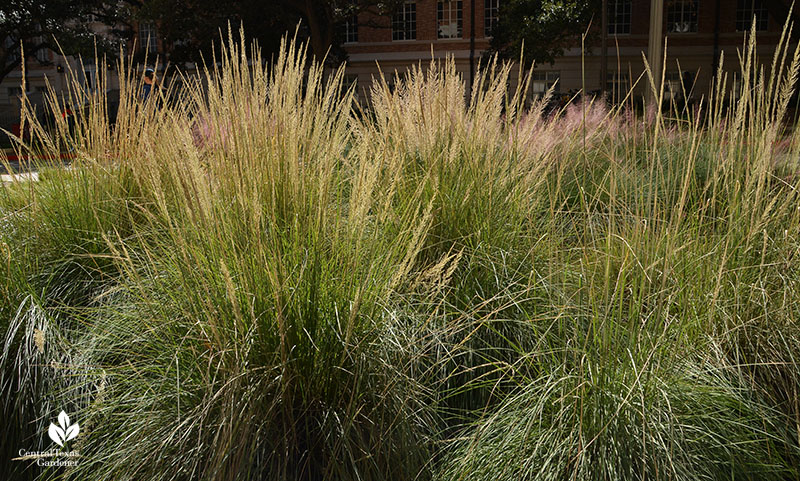 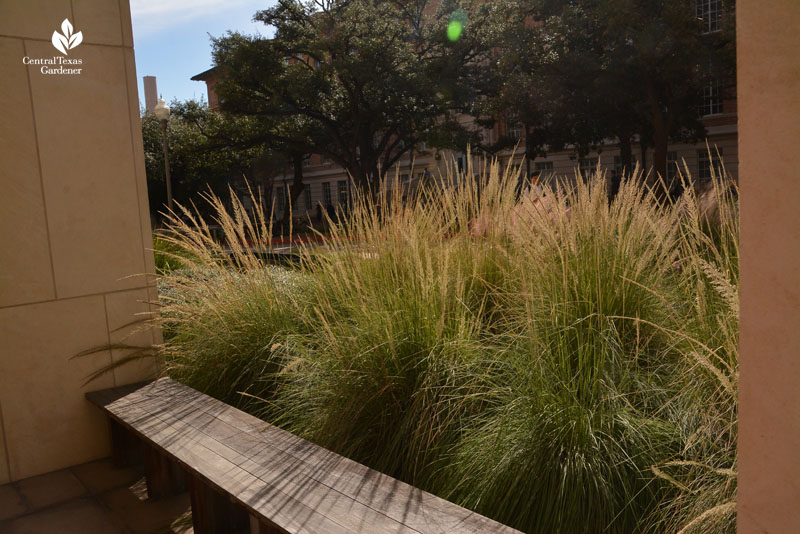 The native species has lovely pale-gray inflorescences, which are called panicles in grasses. Improved varieties with pale yellow and even reddish panicles are also available. One of the most popular is 'Regal Mist,' with deep pinkish-red flower spikes that develop in the late summer and add color to the garden into early winter, when most plants are going dormant and their color is fading. In mild winters, it will be semi-evergreen, with warm golden brown hues, providing habitat for over-wintering butterflies. Cut back to about 6" in late winter or early spring, when you begin to notice new growth emerging at the base. Watch more about it now!

See which technique works best with different kinds of herbs. Herb ‘n Cowgirl Ann McCormick’s got the tricks for hanging herbs to dry and how to strip small ones like marjoram.