Gardening Under Lights with Leslie Halleck

Lighten things up indoors! Certified professional horticulturist Leslie Halleck shares tips from her book, Gardening Under Lights, to cultivate food and ornamentals in dim conditions. On tour, Shari and John Bauer take garden design to new levels with charming, repurposed finds. Daphne and entomologist Wizzie Brown examine a wound on a live oak to determine if the tree’s okay. Plus, find out if Kern’s flower scarabs are causing problems on prickly pear flowers. Find out what mushrooms are doing in your garden and see how viewers are attracting pollinators to gardens big and small. In San Antonio, organic backyard gardener fries up stuffed squash blossoms.

Shari and John Bauer hit creativity mode when they chance upon a piano left for trash, a rowboat buried in mud, or abandoned heirloom kettles. They see new life, poetry, and additions to their enchanting vintage vignettes. When they left Houston for sloping property above Lake Travis, they brought along their imagination, whimsy and spirituality. Shari also packed her gardening skills, honed as a Harris County Master Gardener. Now a Travis County Master Gardener, she orchestrates wildlife habitat from food to nesting to enrich their family with a renewal of life.

Gardening Under Lights with Leslie Halleck

Wound on live oak tree trunk is attracting ants and pillbugs. Is this bad?

During transport, the trunk of a live oak tree was damaged in transport on the way to Chelsey and Rox Dawes’ garden in Leander.  They painted the wound to seal it. Rox reports that the wound has healed well and the tree has grown vigorously.

But the edges of the wound, where the bark overlaps, have harbored a lot of ants. Rox notes that they sprayed orange oil into the wound, which took care of the ants, but now there are pill bugs hiding under the bark.

We checked with AgriLife Extension entomologist Wizzie Brown who told us that the ants are most likely Acrobat ants, and in fact she also has these ants all over a tree with a similar split. Wizzie points out that the ants and pillbugs are just taking advantage of the situation, nesting in wood that has been damaged. Ultimately, neither insect is a big deal, and they’re not causing any additional damage to the tree. But, wounds such as these hold water, which will lead to rot, so Wizzie suggests filling the cavity with expanding foam that can be painted so that it blends in with the bark.

Wizzie also answers a question from Jo Diser in Mason about beetles in her prickly pear cactus flowers. These are Kern’s flower scarabs that feed on the pollen of many plant species, including roses, irises, and certain grasses. Although they can be controlled, we recommend leaving them alone. 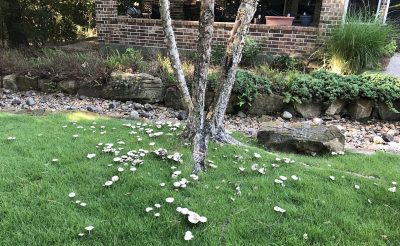 Instead of a plant this week, we’re highlighting a fungus: the mushrooms that often pop up in landscapes after a rainstorm. Andrew Wade’s parents in The Woodlands recently had a bumper crop! Feeding on decaying organic matter, mushrooms are actually a sign of healthy soil. But Andrew wanted to know if they’re harmful to the family dogs. On a past CTG, we consulted Dr. T.J. Palvino at Austin Vet Hospital who said that many are poisonous to dogs, as they are for us. Since most of us are not experts, he recommends removing them if your dog is inclined to eat them. The good news from AgriLife plant pathologist Dr. Kevin Ong is that pulling up the mushrooms won’t destroy the soil’s network of beneficial microbes.