George Altgelt from Geo Growers explains how to renovate drought-damaged soil and restore its vitality. On tour, visit a Fredericksburg waterwise cottage garden. Daphne defines “root hardy” and what it means when temperatures dip. Pick of the week: Christmas poinsettia. Can we plant them in the ground? Arbor Vitae Tree Care Certified Arborist Guy LeBlanc analyzes decay fungi on trees that can lead to trees toppling onto your roof!

In Fredericksburg, Sue Ford and designer Patrick Kirwin took a lesson from the past to update her garden. She wanted waterwise plants and no lawn, with a cottage garden in front to reflect the home’s historic roots. They combined antique roses with structural plants, succulents, naturalizing bulbs, and flowers and berries in all seasons to attract wildlife. In back, a renovated patio converges with the shady garden.

George Altgelt from Geo Growers explains how to renovate drought-damaged soil and restore its vitality.

What does root hardy mean? Is it air or soil temperature?

If the plant tag says that it’s hardy to 32 degrees, is that air temperature or soil temperature? Well, hardiness does refer to how well a plant tolerates cold temperatures. This is most often discussed in terms of hardiness zones, developed by the USDA. The smaller the zone number, the colder the temperatures in that region. For example, Central Texas a zone 8 area, and the coldest parts of Alaska are zone 1.

In December when I had two nights in a row in the mid 20’s at my house, I measured the temperature of the soil, and it was only 40 degrees. Because the air is colder than the soil, many temperate zone plants have developed the strategy of dropping their tender leaves, or even sacrificing their entire body, to hunker down into the soil, where it’s relatively warmer. Plants that have this strategy are called perennials if they’re relatively herbaceous, like our native echinaceas and gazanias, and root hardy if they’re woody, like lantana and esperanza.

And if a plant is listed as “hardy” to a certain temperature, it is likely to be killed if temperatures drop below that number. To protect your perennial and root hardy plants in the winter, be sure to mulch very well before the first freeze, piling the mulch up much higher around the root zone than you normally might. 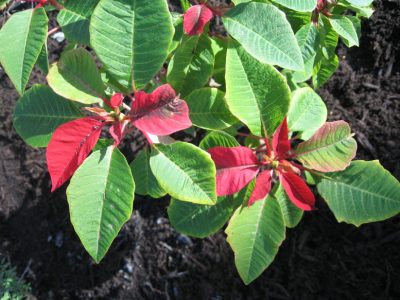 After the holidays, what should we do with our beautiful plants? Can we put them in the ground? Well, although you can put them in the ground, I wouldn't recommend it. But, once we're past freezing weather, you can keep your poinsettia in a pot outdoors, but be sure to protect it from the full sun, especially harsh afternoon light, and mulch it well, to keep the air around the plant moist. It will need to be cut back and fertilized through the summer. Be sure to take it out of its decorative foil to allow perfect drainage! But to get it to bloom again, you'll need to provide at least 14 hours of darkness starting in September. Even then, the colorful bracts may not be as rewarding as those on a new plant would be. But here's a success story from our friend Jay Musfeldt in Leander! Last Easter, he planted his two Christmas poinsettias in the ground. They're in well-prepared and well-mulched soil near a live oak tree, so they get shade about 50 percent of the time. He watered them twice a week this summer. In November, they bloomed again! Although they're much smaller than his original plants, his experiment just goes to show that gardeners can do anything.