Grow Up with Gourds!

Grow up with gourds for flowers to attract pollinators, screen a fence, and make birdhouses, luffa sponges, and artful containers. Suzanne Haffey from the Capital of Texas Gourd Patch/Texas Gourd Society and Charlotte Yeisley from Diamond Y Farm in Smithville explain how to grow and craft with these historic plants. On tour, Hutto gardeners combine art, passion, and community in a healing garden at their historic home. Daphne explains when to prune spring flowering plants. Her pick of the week is Mexican honeysuckle, a hummingbird magnet for part shade. Lyda Guz from The Natural Gardener shows how to attract butterflies.

Grow Up with Gourds!

Grow up with gourds for flowers to attract pollinators, screen a fence, and make birdhouses, luffa sponges, and artful containers. Suzanne Haffey from the Capital of Texas Gourd Patch/Texas Gourd Society and Charlotte Yeisley from Diamond Y Farm in Smithville explain how to grow and craft with these historic plants.

When should we prune our spring blooming plants? Should we fertilize them?

The key to pruning is understanding how your plants grow and how pruning affects them.

Most trees should be pruned in winter. But if your deciduous tree struggled in 2011’s heat and drought, and you were waiting until they leafed out to see which areas were truly dead, you can go ahead and prune out any obviously dead growth now. Be sure to use pruning paint on any oaks that aresusceptible to oak wilt that you need to prune. Generally, we want to prune them between July 1 and February.

Shrubs, especially those that require hedging, should be pruned now, before temperatures really heat up. Be sure to use sharp shears when pruning hedges, so that you make a clean cut-you don’t want the tops to have torn leaf edges that not only look unsightly, but also heal less quickly and serve as an open door for disease pathogens to move right in.

Now is the time prune spring-flowering shrubs, and roses to lightly shape them. Avoid severe pruning right now. Pruning encourages new growth which the plant may not be able to handle in hot weather and low rainfall.

If your spring flowering perennials have finished flowering, go ahead and clean those up a bit to encourage them to put on a flush of new growth, and perhaps even flower again, depending on each plant. As we head into heat, avoid dramatic pruning that will stress the plants. Simply cut back a few inches to shape.

And if you have any plants that bloom all summer but have started to slow down a bit in the heat, a little dead-heading, to remove spent blooms, will encourage new blooms to form faster.

It’s also a great idea to give a light dose of fertilizer to plants that have just finished blooming. Flowering and forming seeds takes a lot of energy, and replenishing some of a plants nutrients, so that it can rebuild its own body after having given so much of its precious energy to the next generation, is a good idea.

But just a light dose. We’re coming in to the heat of summer now, and you don’t want to encourage your plants to grow too much at such a stressful time of year.

Despite its common name Mexican honeysuckle (Justicia spicigera) is not a vine. 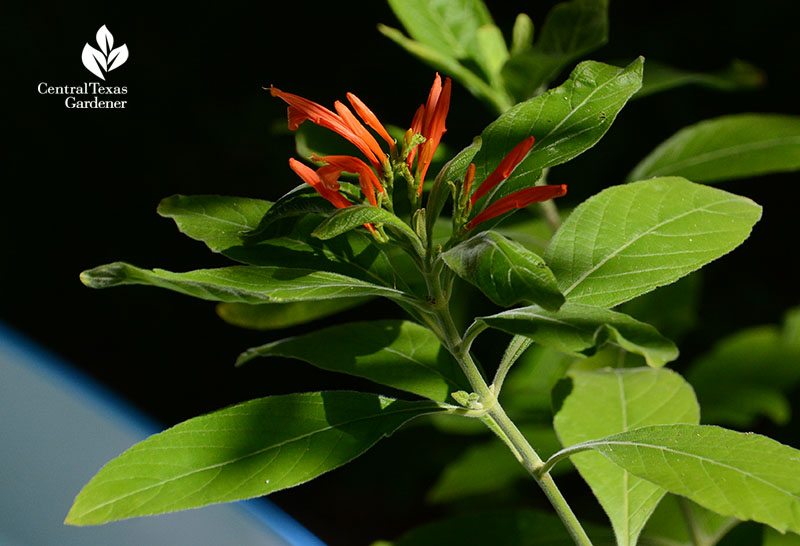 This drought and deer resistant perennial native to Mexico is a small shrub growing to around 2-3' tall and wide. Here's a stand with native inland sea oats lining a formal rill. 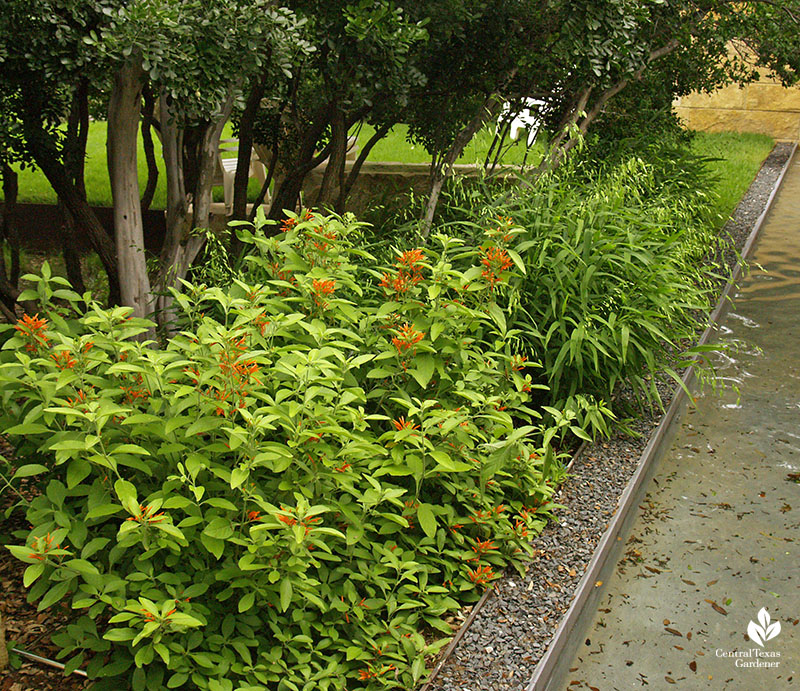 It's the perfect plant for those part shade areas that get some sun throughout the day. 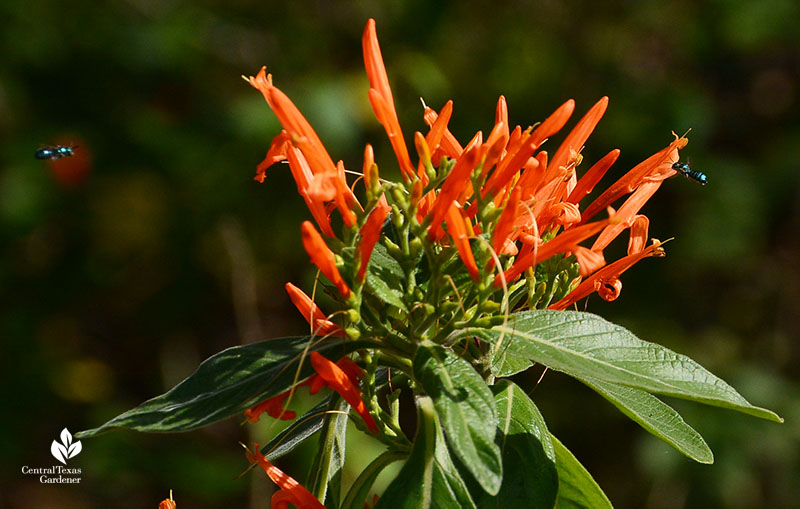 They bloom from late spring to fall, but often extend blooms through late winter/early spring. Bees, hummingbirds, and other pollinators tuck into the slender orange tubes. 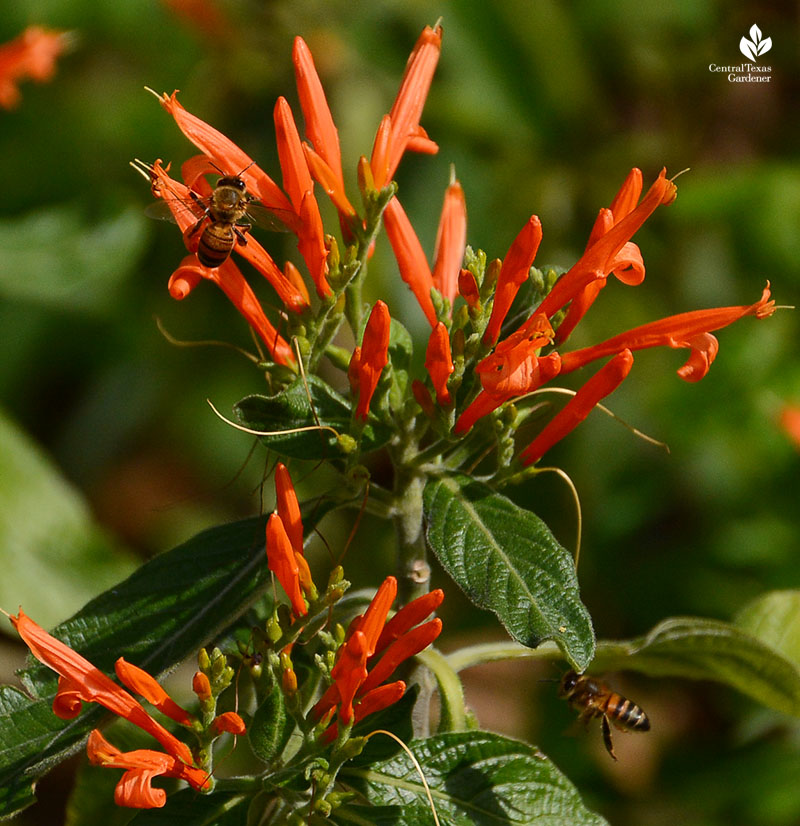 Depending on microclimate and how established they are, Mexican honeysuckle can brown on top after extended hard freezes. Generally it is root hardy and returns in spring. Many times it remains evergreen, blooming even throughout winter. Here it's with shrimp plant (Justicia brandegeeana), both still blooming in winter, although older foliage is compromised by winter days. 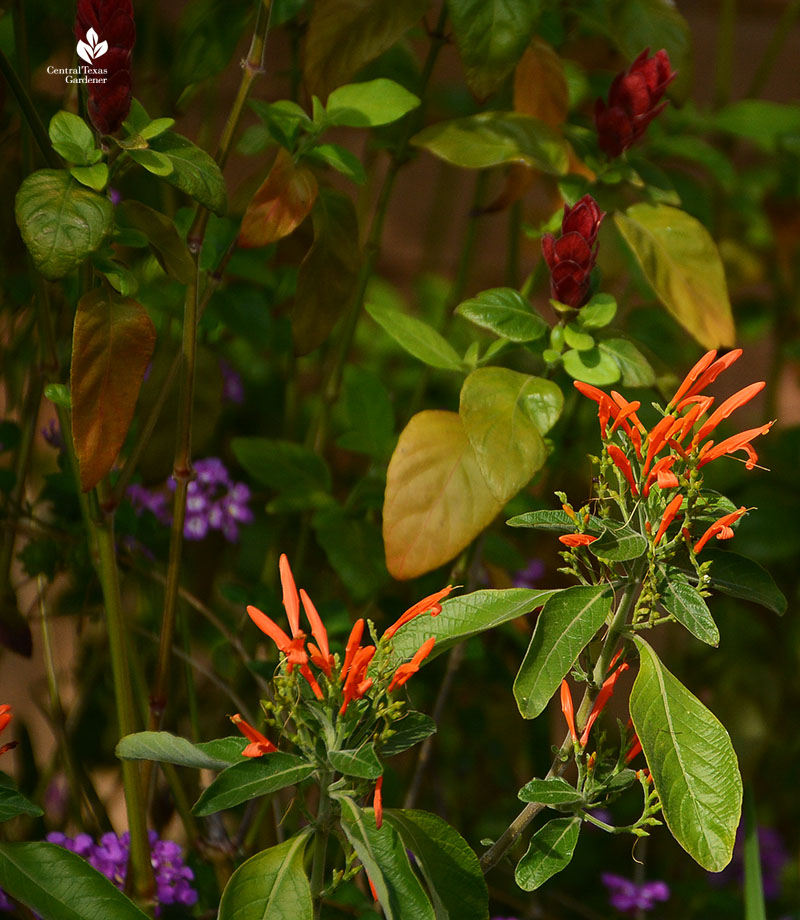 In late winter, cut back lanky growth to new leaf nodes to encourage a bushier shape and more flowers. Consider doing it in stages since bees and other pollinators welcome those winter blooms. 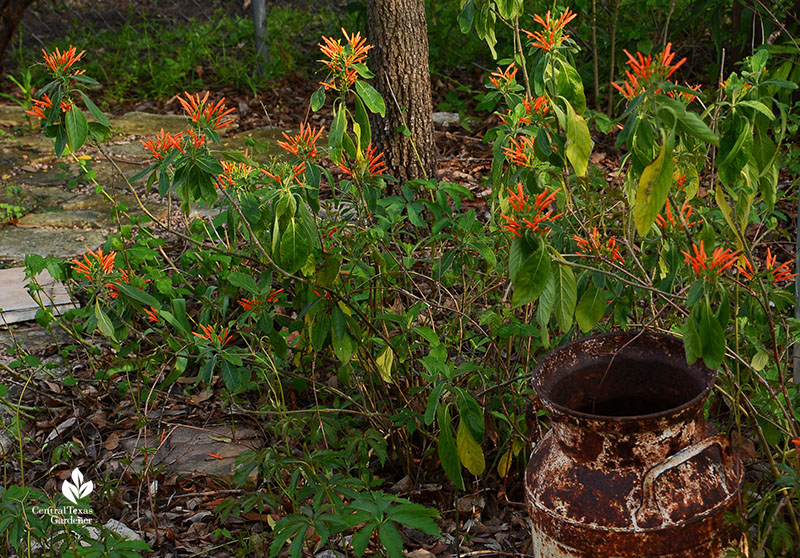 Mexican honeysuckle adapts to most soils to add a touch of touchable slightly-silvery foliage to pop structure and pollinator foliage to bright shade. 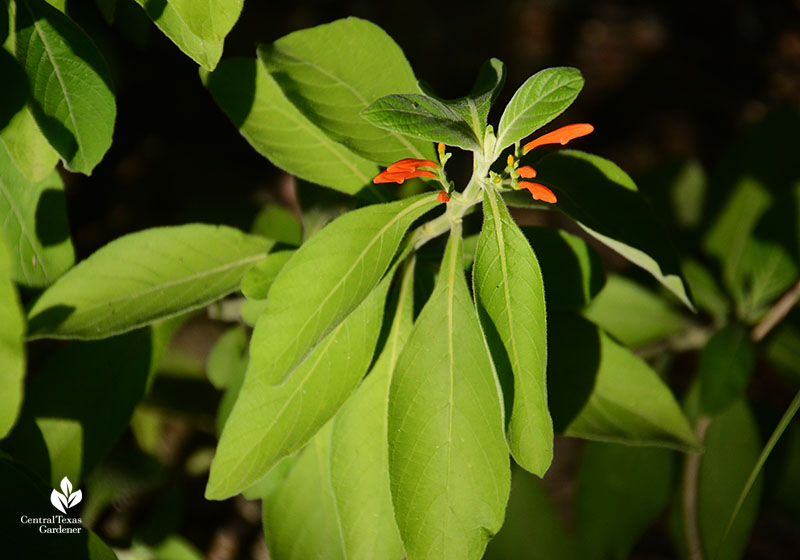 Lyda Guz from The Natural Gardener shows how to attract butterflies.