What’s lurking underneath your vegetable and flower beds? Could it be lead, arsenic or cadmium? Christine Whitney, City of Austin Brownfields Program Manager, explains why soils can be contaminated and how to test them. From food to flowers, Don Iden’s always up for a challenge. In a typical backyard, he and Jana Beckham cultivate over 100 species, many grown from seed. Daphne explains what to do about suckering magnolia trees and highlights spring-blooming native perennial spiderworts. It’s time to shape up our crape myrtle trees. Trisha demonstrates how to prune crape myrtles for beautiful form and lots of summer flowers.

From food to flowers, Don Iden’s always up for a challenge. In a typical backyard, he and Jana Beckham cultivate over 100 species, many grown from seed. Find out how they rotate vegetables between seasons and how flowers attract pollinators. They also grow several fruit trees in buckets to protect in winter. Get their tomato tips to fertilize, tie up, and protect from birds.

What’s lurking underneath your vegetable and flower beds? Could it be lead, arsenic or cadmium? Christine Whitney, City of Austin Brownfields Program Manager, explains why soils can be contaminated and how to test them.

Thanks to Sherry Mason for sending this question and picture about her Southern magnolia tree suckers.

She explains that it’s encroaching on her house and that when she looked through the bottom of it, she saw maybe six or seven more “trees” growing as a thicket, and that those “baby” trees are extending their branches out through the mother tree, making the problem worse.

An arborist suggested raising the canopy, but Sherry prefers the weeping habit of this tree when branches are allowed to drape all the way to the ground. Can she remove the inside trees without harming the original tree?

Well Sherry, yes, you definitely can. Many trees, such as crape myrtle, viburnum, and yaupon holly, naturally have a thicket-like growth habit, producing a multitude of small trunks, in a more shrub-like fashion, rather than a single trunk, or even just a few, slightly smaller trunks, like Vitex or desert willow would do.

Other species like our native live oaks produce offshoots by root-suckering, where adventitious stems are produced from the roots. In any event, you can either leave the plant alone, or mow over the “baby trees,” if you’re able to.

Of course the best plan would be to give the plant plenty of room and leave it to grow according to its natural habit. Unfortunately, Sherry does not have that luxury here. In this case, the best thing to do would be to cut back the ancillary stems that you don’t want to grow. This won’t have a detrimental effect on the mother plant, but it will be an activity that you’ll need to add to your regular maintenance schedule for the life of the plant, since there’s nothing you can do to keep the plant from forming these extra stems.

Note: do not use poison on tree suckers, since they are still attached to the mother tree!

And Marvelyn Lynch wants to know when to fertilize magnolias, but has heard that magnolias don’t really need to be fertilized.

Well Marvelyn, I’d say that most plants don’t really need to be fertilized, especially if planted in their native environments; but most will certainly perform a bit better if occasionally given an appropriate amount of supplemental nutrients.

For most people, allowing landscape trees and plants to grow on their own time frame, as much or as little each year as the climate will support, is the best answer.

And so, your magnolia may indeed do just fine without fertilization. But perhaps your landscape has soil issues that are inhibiting certain nutrients from being available, or perhaps the tree is older and now the soil is somewhat depleted of nutrients, you could consider adding a bit of your fertilizer of choice to the dripline around the tree.

Ultimately, if the tree needs fertilizer, it would begin to show nutrient deficiency symptoms such as leaf yellowing or leaf drop, in which case you could do a soil test to find out exactly which nutrients to apply. Nitrogen, which is used by the plant to produce chlorophyll, tends to be the nutrient that magnolia trees need a bit more of on occasion. Another potential way to address this issue is to add compost around the tree, similar to mulching it, which will slowly add small amounts of nitrogen and other nutrients to the soil as it breaks down. 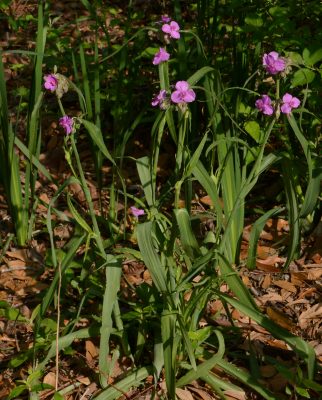 There are many native spiderworts, including giant spiderwort (Tradescantia gigantea), an herbaceous prairie land perennial that makes a great addition to any shady or part sun garden in all soil types—though not in rock. It spreads quickly to about 18 inches, and brambles over itself to two feet tall, or taller when in bloom. Tuck it among perennials that go dormant in winter for its strappy clumps of leaves until bloom time It emerges from dormancy in fall and flowers from late winter to mid-spring. Since plants easily hybridize, colors range from blue to lavender and pink, dependent on soil pH. Bees and butterflies will head right over! Not deer resistant! Hardy to Zone 8, giant spiderwort returns reliably each year in Central Texas. It can be easily divided to share or move to other parts of the garden in fall or after blooming. You can move in early spring but you may sacrifice flowering that year. After flowering, you can cut the stalks to the base of the plant. If you want it to re-seed, or to collect seeds yourself to share with friends, wait until the seed heads are brown. To collect seeds for next fall’s planting, cut them off into a bag or bucket and let them dry in shade for a week or so. After that, it’s easy to scoop up the seeds to store until fall planting. Be sure to remove all the chaff to prevent mildew.

Trisha demonstrates how to prune crape myrtles for beautiful form and lots of summer flowers.