How to Select Rainwater Collection Cisterns

What do you need to know when selecting rainwater collection tanks? Chris Maxwell-Gaines from Innovative Water Solutions explains the basics for choosing and setting up your tank. Are weeds growing like weeds? Daphne explains best practices for control. She also answers a viewer’s question about what it takes for yuccas to bloom. John demonstrates how to avoid overwatering houseplants. On tour, Sprout architectural landscape designer Jackson Broussard brings together architecture, plants, and memories in every design. A very special makeover landed him in his childhood home.

Sprout architectural landscape designer Jackson Broussard brings together architecture, plants, and memories in every design. Uniting function and beauty, a special project landed him in his childhood home where he embellished classic design with unique, sentimental finds.

What do you need to know when selecting rainwater collection tanks? Chris Maxwell-Gaines from Innovative Water Solutions explains the basics for choosing and setting up your tank.

How can I control weeds?

Although weeds grow throughout the year, the ones that are most attention-grabbing are those that pop up quickly, usually in late winter/early spring and later summer/early fall.

Most of these are annual weeds, whose seeds germinate in response to environmental conditions. These types of weeds would be very easy to control with a pre-emergent herbicide, except that it’s so hard to time the application with unpredictable weather.

As the name implies, these products keep seeds from germinating, so by the time you see the weed, it’s much too late. Even an organic pre-emergent such as corn gluten meal just ends up fertilizing the weeds and making them stronger, if not timed appropriately.

No need to use products: annual weeds are best pulled, or just mowed over, before they flower and produce the next generation. If the weeds are in your lawn, you’ll need to encourage the lawn to grow more densely into the spots where the weeds were, which will limit errant seeds from sprouting when they blow in from around the neighborhood.

You might have also heard about using horticultural grade vinegar as an organic herbicide, but that only kills the top, not the roots, so still, it’s much better to pull weeds, if at all possible.

Be careful when purchasing bulk top soil, which will invariably contain weed seeds. If tilling an area, you may turn up a bank of old weed seeds that would then germinate, but also, that nice, soft soil makes it very easy for newly-blown-in seeds to sprout. Just keep an eye out on newly tilled areas, and run the hoe across any weed seeds that sprout. When young and tender, all you need to do is disturb them slightly to keep them from continuing to grow.

Note: many gardeners and urban farmers no longer till to avoid bringing up a weed seed bank or harming earthworms. 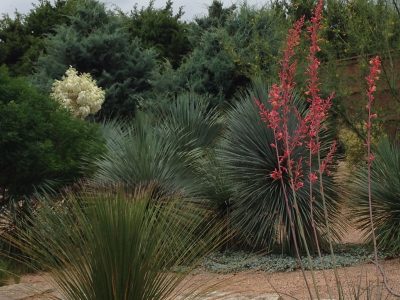 Our plant of the week is also a question from Marilyn Tinstman: what do yuccas need to bloom? She has a gorgeous drought-tough area of her garden with silver ponyfoot groundcover and many succulents, including red yuccas, Hesperaloe parviflora, which are actually not Yuccas at all, but more closely related to lilies. Her stunning Yucca rostratas are well on their way to their ultimate size of about 10 feet tall and a few feet wide, are very healthy, but only one bloomed last year. Yucca rostrata perform best in full sun, in very well-drained soil, but they do take a few years to flower, so perhaps these are just coming into maturity and flowering will be better this year. Excessive water and soil nutrients may also be an issue: Yuccas really thrive in poor conditions. And perhaps consider a bloom-boosting fertilizer, which would have a low amount of nitrogen related to phosphorus. Plants with plenty of nitrogen in the soil will grow very well but may not bloom. The plants appear very healthy, so I wouldn’t worry too much. And be sure to send us an update this year!