Indoor Plant Décor for Every Style and Budget

Pep up your house and office with Indoor Plant Décor! Authors Jenny Peterson and Kylee Baumle take the humdrum out of houseplants with THE design stylebook that connects to your muse, budget and imagination. Daphne explains how the late frost burned new leaves on her Monterrey oak. John Dromgoole shows how beneficial nematodes control flies, fire ants, fleas, and other garden pests.

Pep up your house and office with Indoor Plant Décor! Authors Jenny Peterson and Kylee Baumle take the humdrum out of houseplants with THE design stylebook that connects to your muse, budget and imagination.

Well, this is simply late frost damage on leaves that thought it was time to come out. But, I contributed to the problem in this case!

Frost damage on trees is not really all that common, since our temperate zone deciduous trees can tell time quite well. They click off the hours of cold they’ve received, along with the hours of daylight, which increase with the coming spring, in order to “know” what time of year it is.

One problem is that our weather can be so crazy from January through late March. Hot one day, freezing the next. What happens is that unusual warmth tricks plants into thinking it’s time to flush out.

We can’t do much about that, but we can avoid encouraging them too much. In fall, we want to avoid pruning evergreens. Pruning in warm temperatures will signal them to put out new leaves. Then, frost hits suddenly, as it always does, and the young leaves are burned beyond repair.

But in late winter, when it’s so warm that we think spring is here, we get a little eager to help our plants by fertilizing. And that’s where I made my mistake.

I really wanted to encourage my new garden. In my impatience to kick my shrubs and tree into high gear, I fertilized them a little too early. The tender new growth shot out in response.

Then, in those warm days, we got frost just a few days later.

I was so in shock when I first noticed the damage that I thought it might be a disease, which is what most people thought, but if you’ll look closely, only the NEW leaves were damaged, not the older, tougher leaves, and not the stems.

Any sort of tip-invading disease would have not only caused “burned” symptoms on the new leaves, but also on the tender, developing stem. That would have caused the stem to be discolored and I would have seen obvious die-back.

Although I’m disappointed at the frost-bite, my Monterrey oak is already recovering by breaking new buds, which will create all kinds of new growth. And actually, that will make my tree more full and lush, which will, hopefully, look much nicer in the long run. 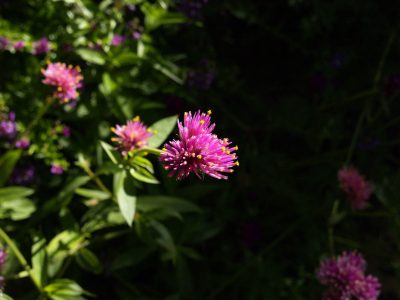 Also known as bachelor's buttons, this annual hot-weather plant has been a garden-mainstay for years. In fact, they were declared Texas Superstars in 2012, meaning that they've been extensively trialed and shown to be super-tough in most Texas landscapes. But recently some new colors were developed by the researchers at Texas A&M. Before these plants were released, I was lucky enough to be given some to trial in my garden, and I can report that they are indeed fabulous. The plant trials coincided with the summer of 2011, the hottest on record, and these little plants just kept on going, and blooming like crazy. In addition to newer, deeper colors, taller plants were also developed, but crossing the common globe amaranth with its much taller, native cousin, the Rio Grande globe amaranth. These plants thrive in full sun, on about once a week watering. They ARE annuals that will need to be replaced each spring, but transplants take off and fill in rather quickly to make a nice addition to any container or garden bed.