Fall is the best time to plant trees, but common mistakes can end their lives too early. Paul Johnson from the Texas A&M Forest Service explains how to avoid common pitfalls, why trees dropped leaves early this year, and the latest insect to keep on our radar. And check out his weekly podcast, Trees Are Key.  Daphne explains why healthy trees suddenly fall over at the roots and what to do about it. Her Plant of the Week is native possumhaw holly, beloved for its structure and winter berries for birds.  On tour, a San Antonio couple designed a drought-tough contemporary courtyard around heritage oaks. Trisha shows what she puts in the compost pile and what to avoid.

Fall is the best time to plant trees, but common mistakes can end their lives too early. Paul Johnson from the Texas A&M Forest Service explains how to avoid common pitfalls, why trees dropped leaves early this year, and the latest insect to keep on our radar. And check out his weekly podcast, Trees Are Key.

My healthy tree just fell over from the roots. What happened and can I fix?

Our question this week is one that I’ve gotten from many people recently, regarding trees that have fallen over. Having experienced this in my own yard, I know how nightmarish it can be.

Almost a year ago, after the abundant and unusual amount of late summer and early fall rain we received, and during a particularly heavy storm, my 5 year old Monterrey oak toppled over. Luckily, this wasn’t the result of the trunk breaking, but rather the entire rootball heaved up out of the ground.

I wasn’t able to deal with the issue for a few days, and so I didn’t hold out much hope for the tree’s survival. Of course, I could have gone ahead and removed the tree, but I decided to stake it and see what would happen, having lost nothing but time and the cost of a few T-posts if it didn’t work.

So with a little help, I righted the tree back to vertical and tied it, with strong rope, to three stakes, which I left in place for about nine months. Today, you’d never be able to tell that anything ever happened. The tree didn’t lose a single branch and seems perfectly fine.

But, I know that below the soil it isn’t fine, and the roots have a long way to go before I can reliably believe that the tree is stable, so I’m still hoping for the best.

In another instance of tree toppling, we recently lost a mature Texas mountain laurel in our demonstration garden. In this instance, the problem was more severe. Back in June, one entire side of the multi-trunked tree snapped off at the baseline, leaving no opportunity for repair. I knew that if we had any hope of saving the remaining half of the tree that we’d need to stake it, but I got busy and lost track of time.

And sure enough, only two months later, the other half of the tree broke at the base, and toppled over.

So, what’s going on with these falling trees? Years of drought have kept them from growing a healthy, widely-dispersed root system, so even though they’re most likely branching and putting on top growth, they aren’t able to develop and sustain much root mass to support that growth.

Then, more recently, we’ve had an overabundance of rainfall, leading to wet, unstable soil. In the case of my Monterrey oak, it was young and not as heavy. But with our Texas mountain laurel, it was quite mature, and the recent rainfall allowed and encouraged it to produce a heavy crop of seeds. Also, it had other plants around it, and the trunk was staying far too wet, leading to rot. Unfortunately, there isn’t a lot we can do to prevent these situations from happening. 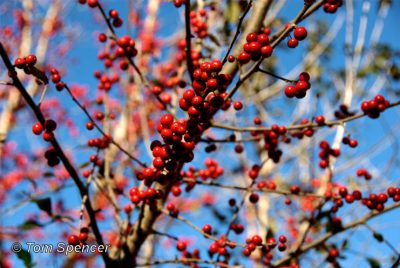 Our pick of the week is Possumhaw holly, Ilex decidua. Cedar waxwings, like this one dining at the Kyles, love the fall and winter berries. They are also favored by mockingbirds, American robins, and other wildlife. Despite the horrible summer, the Kyles' possumhaws are covered with berries. This native shrub is deciduous, adding colorful interest to what might otherwise be a drab winter garden. It gets 15 to 30 feet tall, and 15 feet wide, so could actually be treated as a small tree. Like other hollies, the leaves are thick and glossy during the growing season, and these turn yellow in the fall, before they are dropped. This plant really needs full sun to produce a good crop of winter berries, but it can tolerate some shade. As you might guess, since it sailed through the hellacious summer of 2011, it should not be overwatered, and may rot if it is planted in an area with poor drainage. But even though it doesn't like much water, you should still give it a drink every now and then during long periods without rainfall.

Trisha shows how to speed up that compost pile.