Lessons from Urban Farmers to Grow in Heat

After a hot and arid summer, see how to boost tired-out soil. Marissa Lankes from ACC’s Sustainable Agriculture Program explains how to nourish for productive crops this fall. On tour, what inspires a banker to become an urban farmer? Ethnic tastes inspired Alejandra Rodriguez Boughton to start La Flaca urban farm and fill a growing need with crops that beat the heat. Daphne analyzes why mature yuccas simply broke in half. And, find out how to recognize invasive plant, dodder. CTG’s camera operator and Strange Town producer, Mark Morrow, illustrates how he removed lawn in his narrow side yard for a paver pathway and privacy.

When Alejandra Rodriguez Boughton immigrated to Austin from Monterrey, Mexico, she brought along memories of good food that prompted a career change from banker to urban farmer. Discover how she grew her dream alongside horticulturist Ben Carroll to meet a growing need from local restaurant chefs and home cooks for authentic tastes. Find out the plants they rely on in heat and drought and why flowers make it into their edible mix.

After a hot and arid summer, see how to boost tired-out soil. Marissa Lankes from ACC’s Sustainable Agriculture Program explains how to nourish for productive crops this fall.

Why do yucca trunks break in half?

Kim Schmider has a large Yucca torreyi that had three tall, individual trunks. This summer one of the trunks broke in half and was wet inside. Then, another trunk broke in half and sounded hollow. What’s going on?

We reached out to New Mexico landscape architect David Cristiani, and John White, Garden Curator for the Chihuahuan Desert Gardens at the University of Texas- El Paso, to get their thoughts. Both have seen this issue on torreyi and other large, tree-form yuccas.

Although it isn’t obvious from these photos, both John and David suggest the culprit could be yucca weevil. Look for frass and exit holes in the trunk. Also look for any cavities or trails that may have been made by other boring insects, whose larvae bore into the trunk and feed on the heart of the plant, making it less stable and more susceptible to decay and breakage.

John and David also noted, and I’ve witnessed this myself, that the problem could just as easily be that the weight of a large limb growing at an angle may become too heavy for the trunk to support. Environmental factors will have an effect on this:  heavy spring rains in Central Texas may lead to rapid, weak growth. Also, in an irrigated landscape, regular irrigation, and perhaps fertilization, may be a factor causing the yucca to grow too fast.

In either case, rapid growth often results in a weakened trunk. Much like a teenager who may be a little clumsy at a point when their legs grow a little faster than the rest of their body, rapid growth spurts in desert species, which are more accustomed to a different pattern of rainfall, often become gangly and “lose their balance.”

Yucca are slow-growers, so resist the temptation to fertilize, and even to irrigate, except during the hottest, longest of dry spells, and even then, only sparingly. Plant yucca and other desert species in rocky areas of the garden, perhaps even on berms, and be sure that the soil has good drainage. And don’t use bark or other organic mulch around these plants. In short:  do everything you can to mimic their native habitat. 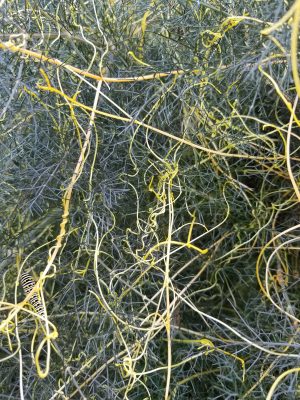 Dodder is a plant that you don’t want to cultivate! Ellen Martin spotted this stringy vine strangling her bronze fennel, marjoram and tomatoes. It doesn't have leaves, but it does have tiny white flowers. Dodder’s a parasitic vine that gets its nourishment by stealing it from other plants. Dodder is an annual vine and is listed as a noxious weed on the official, federal list of noxious/invasive species. Seeds germinate in spring and the plants flower in late spring to summer. Remove seedlings as they sprout and cut back any mature plants once you notice them. Do not let dodder flower or produce fruit. Since it’s an annual, you can use a pre-emergent herbicide, but that will also inhibit the seeds that you want to grow. Thankfully, with diligence, use of any product won’t be necessary at all, if you remove those seedlings before they have a chance to produce the next generation.

CTG’s camera operator and Strange Town producer, Mark Morrow, illustrates how he removed lawn in his narrow side yard for a paver pathway and privacy.