Tom Spencer previews the Master Gardener tour to show how to mix edibles with flowers and plants for wildlife. Visit two gardeners who stripped out the grass for food, flowers, art, and outdoor living spaces. Daphne answers: Can I recycle kitty litter in the garden? See how to plant bluebonnets and other wildflower seeds with tips from Andrea DeLong-Amaya.

Ann and Robin Matthews took the big plunge: take out all the grass, even in front, and replace it with vegetables, wildlife plants, and living spaces. They include hand-made art at every step (including home-made stepping stones), and even built a screen imprinted with Native American rock art impressions. See how they tuck in rain barrels at every gutter to water their plants, and how they blended their garden with their neighbor for a resourceful neighborly connection.

Tom Spencer previews the Master Gardener tour to show how to mix edibles with flowers and plants for wildlife.

Can I recycle kitty litter in the grass or non-food areas?

Although tossing your kitty litter into the grass a couple of times probably wouldn’t do much damage, I would advise against it, especially long-term, even in non-food areas of the yard. The small amount of cat waste in the litter is really not the issue, especially in non-edible beds, but the kitty litter itself would, in effect, become a soil amendment.

Most of these products are either made from clay or silica. Clay is clumping, and does not easily break up in soil, so it would probably just stay on the soil surface as little balls. And if you have a heavy clay soil, you are already very familiar with the problems caused by having too much clay in the soil.

Silica products would be less of an issue, since silica is basically coarse sand. And then there are the biodegradable products, which would, theoretically, break down over time, making them the least problematic in this situation.

I still think it’s best to just go ahead and send used kitty litter to the landfill! 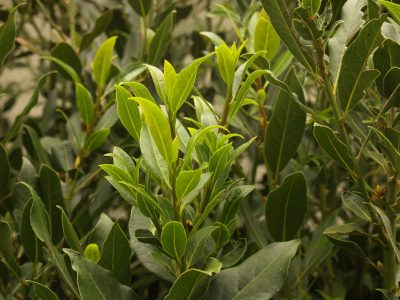 Bay laurel (Laurus nobilis) is a beautiful evergreen shrub of culinary fame. How cool to pick your own bay leaves to dry or use fresh in recipes! And yes, some cooks want it dried, but fresh also works. In its native habitat, Bay laurel can get up to 40' tall, but here it will remain much shorter, closer to 5 feet tall, though Trisha's at Lake Austin Spa is way beyond that! You can also hedge it back, to keep it manageable if it gets too tall. It also does great in a container. Since Mediterranean winters are not usually as cold as ours here, you may need to protect bay laurel on an extra cold night, especially during the first few years. But well-established trees should experience very little freeze damage, even with temperatures down into the teens, as long as those temps are not prolonged. Bay laurel prefers very rich, well-drained soil, so be sure to amend the planting area (not just the hole) with lots of compost. It requires full sun to thrive, but will struggle in areas with reflected heat and very dry air. You will need to water bay laurel regularly, but not more than once a week, once established, except in very hot, prolonged dry spells. Of course, since this is a culinary plant, you'll want to harvest some of the leaves, which you can do at any time of the year. Since bay laurel is so shrubby, it responds well to pruning, especially if it's healthy, and will put on new growth every time you harvest.

See how to plant bluebonnets and other wildflower seeds with tips from Andrea DeLong-Amaya.