Preview the Lady Bird Johnson Wildflower Center’s Gardens on Tour for native plant and design ideas. On tour, see how Lynne and Jim Weber captivate wildlife in their small garden all year long. Daphne analyzes why a native winecup is dying from the center. Pick of the week is stunning summer annual, Celosiaspictata ‘Flamingo Feather’. John Dromgoole picks the right mulch for your plants.

Why are my winecups dying from the center?

Thanks to Joy Vera for sending in this question and picture!

Here’s what’s going on: Her winecup is decaying from the center outwards, and the leaves turn yellow and have bumps on the undersides.

Right after shesent this question, I noticed that the winecups in the garden in front of my Texas AgriLifeExtension office are doing the same thing. We have a huge patch of them, about 4′ in diameter, and death is slowly radiating from the center, ever closer to the edges of the plant.

Well Joy, great detective work! Dr. Ong confirmed what your initial research led you to believe: rust. And he says that he’s seeing reports of lots of it this year.

Now for the not-so-great news: Unfortunately, there really isn’t much to be done for the plant at this point. Fungicides may be successfully used on rusts in many cases, but here, with the entire center of the plant already dead, you won’t be able to reverse the damage, so you needn’t bother with any treatment.

This disease is likely a little more prevalent this year due to the fact that we had a relatively warm winter, with better than average rainfall, and our spring temperatures warmed up very early. Because of this, our wildflowers came on early and strong, and microbes took advantage of the warmer, wetter than normal, environment.

I would suggest allowing the plant to flower until it becomes more unsightly than you can bear, then cutting the top growth back. Winecups are perennials, so they should grow back from their underground tuber, if it hasn’t been damaged by staying overly wet.

Winecups prefer dry, rocky, very well-drained soil, so if you have organic mulch around them, be sure to remove it. After you’ve cut the plants back, clean up any organic matter, including any mulch that you had around the plant.

Rusts are very host-specific, meaning that each species of rust usually only attacks a couple of specific plants, so the rust on your winecups most likely won’t damage the other plants in your garden. Dr. Ong also pointed out that the rust was most likely only the initial pathogen, after it did some initial damage, other pathogens most likely moved in to take advantage of the weakened plant. So be sure to remove all of the possible source of pathogenic spores that you can and toss it in the garbage. 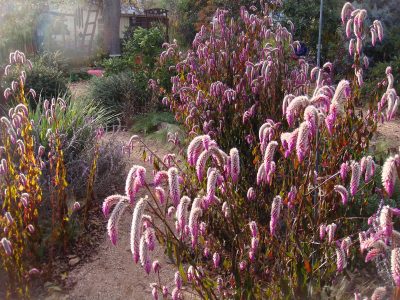 Thanks to Philip Leveridge at East SidePatch for providing this picture and information! We've long admired this warm weather annual in his garden, where it readily sows itself in sunny decomposed granite paths. You will also see it called 'wheatstraw celosia.' Philip notes that celosias prefer a well-drained, gritty soil. In fact, they are prone to root rot if kept too wet. At the same time, even though they love the heat, they do require supplemental water in drought. These are showy plants that get to 2' or taller and about 14' wide. The vibrant pink flowers are great for dried arrangements, and you can collect the seed to plant again next year. Plant seeds after the last frost to enjoy until the first freeze. Philip harvests seeds from his plants when they mature in November or December. At that time, he plants them where he wants to see them next year. Or, you can save your seeds in a container to set out in spring.

John Dromgoole picks the right mulch for your plants.