Head into the heat with plants that stand up to drought and stand out in the garden with Michael Cain from Vivero Growers Nursery. On tour, see how Paul Lofton created an outstanding garden on a budget. Daphne Richards identifies crown gall on an oak tree. Her pick of the week is drought-tough thryallis. Merrideth Jiles from The Great Outdoors demonstrates how to propagate plants.

Paul Lofton partners with imagination and DIY creativity in his expansive low-water garden on a budget. When he finds a good plant, he simply makes another. He adds to his home-made compost with Pflugerville’s free compost and mulch to turn lawn into gardens that attract wildlife of all kinds. Scavenged stones become walkways, intimate garden spaces and benches.

Head into the heat with plants that stand up to drought and stand out in the garden with Michael Cain from Vivero Growers Nursery.

What is this growth on my oak tree?

Thank you to Larry for this great question! We consulted arborist Guy LeBlanc who confirmed what we thought: This is crown gall.

Guy reports, “It’s usually caused by a bacterium, but some experts say other causes are possible. The source of entry is usually some kind of wound, oftentimes nematodes or other insects that invade roots. Some galls that occur low on a trunk can actually be fungal galls.”

Guy also confirms that the white insects in the picture are termites. He’s often seen them infest crown galls, but says that they won’t harm the living portion of the tree, as our local termites just invade the dead tissue. Guy has consulted with entomologists who do not recommend treating the termites.

According to Guy, most trees he’s seen with crown gall survive in very good condition without treatment. But he’s also seen some that slowly decline over many years. And unfortunately, there is no successful treatment for crown gall that he knows of.

So, our advice to Larry is to keep the tree healthy, well-watered, correctly pruned, and to avoid damaging the bark. 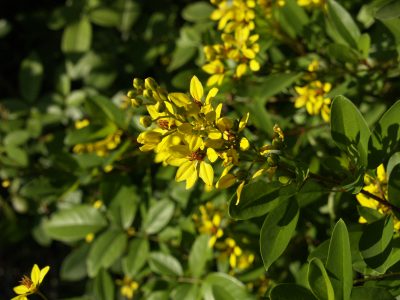 This drought-tough shrub needs very little water to be happy. It's ideal to screen a view or add yellow accent flowers against purple-flowering shrubs like Duranta (Duranta erecta) or near Texas sage/cenizo (Leucophyllum frutescens). Size: 4-6' tall, 4' wide Light: Prefers full sun but can take part shade. Soil: Any soil type, but does prefer good drainage. Do not overwater. Do water to establish. Flowers: Yellow flowers cover it from spring until frost. Deer: Resistant. Leaves: Deciduous in most winters. Hardiness: It's listed to about 25?, but even when temperatures dip lower, it's normally root hardy. If freeze damaged, simply cut back and it will quickly rebound in spring. Care: Low. No need to fertilize if in decent soil. Pests aren't a problem. If it gets out of bounds, simply prune back and shape.

Merrideth Jiles from The Great Outdoors demonstrates how to propagate plants.