Make a splash on a preview of the Austin Pond Society 2014 tour with Linda & Karl Tinsley. On our tour, Laura and Travis McGarraugh revamped their backyard into new family fun with ponds and wildlife when their kids outgrew the lawn’s playscape.  Daphne identifies the spider mites attacking a cedar (ashe juniper) tree. She picks dwarf pittosporum for an evergreen small shrub in shade. John Dromgoole shows how to keep ants out of containers, along with fertilizer tips for best flowering.

When their kids outgrew the lawn’s playscape, Laura and Travis McGarraugh revamped their backyard into new family fun with ponds, wildlife and an outdoor living room. Their young daughter accents the gardens with succulent containers she designs.

Make a splash on a preview of the Austin Pond Society 2014 tour with Linda & Karl Tinsley.

What’s wrong with my cedar trees (ashe juniper)? They turned brown and are covered in cobwebs.

Thanks to Jean Warner for this great picture and question! What’s going on with her cedars (ashe junipers)? They’re covered in cobwebs, turning brown, losing their foliage and the berries are also dry and very small.

Initially, she thought it was just drought until she saw cobwebs in the trees. Jean says that she shook the limbs over white paper, to check for spider mites, but didn’t see any.

Well, even though you didn’t see any spider mites when you shook the limbs, they are definitely there, or WERE there at some point, hence the webbing. Spider mites absolutely LOVE cedar trees.

But as Jean noted, the drought is also in play here. When the scaly juniper leaves dry out, they do turn brown and dry up, and drought-stressed plants become vulnerable to all sorts of secondary and tertiary problems.

A definite sign of spider mites is the webbing on the trees, which is especially evident on the tender new growth. Most people think that spider mites are only active during the hottest, driest times of the year, in late summer.

But if plants are drought-stressed at other times of year, which they are now, spider mites will easily and happily move in to take advantage of the situation.

Spider mites were one of the few pests that I had to contend with when I was the Extension Agent in El Paso, but they definitely wreaked havoc in the hot, dry Chihuahuan Desert climate. When someone brought in sample of damaged juniper leaves my first spring in Austin several years ago, I was shocked. It certainly looked like spider mite damage, but surely not in March! I had to double check the diagnosis with my entomologist colleague Wizzie Brown, who confirmed that yes indeed, spider mites were to blame.

Unfortunately, there isn’t a lot that you can do about the problem. There are miticides, but it’s almost impossible to reach all of the mites hiding between all scales of juniper leaves. The best course of action is really just to spray the trees down with a strong jet of water, washing away all the webbing. You won’t get rid of all the mites this way, but you will knock the populations back quite a bit, so do this regularly. 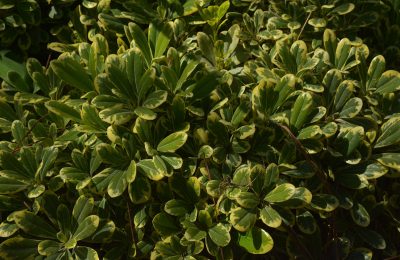 Dwarf pittosporum is also known as mock orange, for the lovely fragrance of its flowers. It's a wonderful evergreen plant for shade to make a low-growing hedge around porches and patios, where you might want a little bit of privacy, but you'd still like to be able to see over them. While larger pittosporum cultivars can get very large and may need a lot of pruning, the dwarf ones get only 2 to 3 feet tall and wide. I planted 'Mojo' in the bed along my front porch, but 'Cream de Mint' is another great dwarf cultivar. Mine have only grown about 3 inches in the year since they've been planted, so I'll need some patience while they're growing. But that patience will pay off someday, when I'm enjoying a glass of iced tea behind my lovely little privacy screen, rather than out in the garden pruning it. Pittosporum do best in at least some shade, and may struggle if planted in full sun. As with most shade plants, they like a little more water, so add some compost to planting beds to help retain moisture. Watering deeply once a week, or even less once established, will be just fine for this shrub, which is actually very drought-tolerant. Pittosporum are very hardy, listed down to zone 7. Mine had just started putting on new growth when we got a late-season frost this year, but the tender new leaves weren't damaged at all. Be sure to plant close mock orange close-by, so that you can enjoy its heavenly fragrance in the spring.

John Dromgoole shows how to keep ants out of containers, along with fertilizer tips for best flowering.