Gear up for fall vegetable planting with Randy Jewart from Resolution Gardens. On tour, visit a charming year-round potager in Brenham. Daphne Richards explains why pecan and crape myrtle trees have been “raining.” Her pick of the week is robust butterfly vine. John Dromgoole demonstrates how to start vegetable seeds to transplant later.

Take a tour of Sally and Jay White’s charming potager in Brenham, Texas, where they tackled Bermuda grass on former ranchland to grow food all year long. See how they built bricked pathways around artistic raised beds and get Jay’s advice for the best organic vegetables to ever hit the kitchen table.

Gear up for fall vegetable planting with Randy Jewart from Resolution Gardens.

Why are my pecan and crape myrtle trees raining? What can I do?

Thanks to Felicia Kongable who asked what’s going on with her pecan trees! The leaves are blotchy. We’ve been getting a lot of questions about pecan trees and crape myrtles that seem to be “raining” a sticky substance. Many of our viewers have reported sticky lawns, sidewalks, and cars and are worried about their trees and shrubs.

This “rain” is actually just a sugary substance, referred to as honeydew, that’s caused by insects feeding on the leaves and other tender parts of plants. On pecan trees, aphids are most likely to blame. And on crape myrtles, I’ve noticed that whiteflies are more commonly the culprits right now. These insects feed by injecting their proboscis into the phloem and feeding on the plant’s sap, which is pretty much pure sugar. So, when these insects excrete their waste products, that waste is also almost pure sugar.

Sooty mold, a secondary pest, then moves in to take advantage of the situation. This fungus feeds on the excreted sugar, so you’ll probably also notice a black substance on your plant’s leaves. Sooty mold is actually a bigger issue than the honeydew, because it interferes with the plant’s ability to soak up sunlight.

Bill Ree, an Extension specialist that focuses on insect issues in pecans, told us this: “Managing the honeydew from aphids is a real challenge. On many occasions for the homeowner, I have recommended just a good hard spray of water to remove aphids and honeydew.” Bill notes that the ones on Felicia’s tree are the black-margined pecan aphid. They go through cycles, building up during June and July. Then we’ll get another, smaller invasion in August and September.

Your best option really is to do nothing, and simply let nature take its course. Ladybugs and green lacewings may take care of the problem by eating the aphids. And parasitic wasps will lay their eggs on the aphids to raise their young. But even if there are not enough beneficial insects around to control the damaging ones, pecans and crape myrtles are deciduous, so they’re going to drop those infested leaves this fall, and produce new leaves in the spring. And hopefully next year we won’t have as bad of an infestation. You can also help plants through the stress by watering them slowly and deeply, so that they may be able to produce a few more leaves and put on some new growth this season, before they go dormant.

If you’re planting a pecan tree for the first time, consider a variety that has a tolerance to aphids, such as Pawnee, Kanza, Lakota, and Sioux. 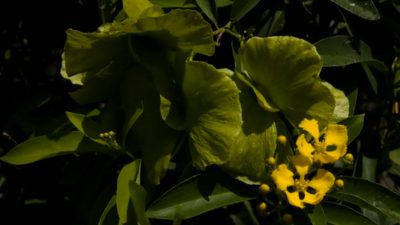 Also called orchid vine, this perennial thrives in the heat and sun, but also does well in part-shade. It prefers well-drained soil and is very drought tolerant. It may go dormant in cold winters but will return in spring. It can be a bit invasive, but that depends on your point of view. It attracts bees and other beneficials, but is deer resistant. The seed pods resemble butterflies and can be dried for crafts and decorations.