From romantic to vivacious, match a drought-tough rose to your garden’s personality with Michael Shoup of the Antique Rose Emporium. On tour, visit a healing Tranquility Garden that brings another dimension to a hospital’s healing mission. Daphne explains when to prune roses and how to do it. Merrideth Jiles shows how to improve drainage.

Often, we head to our gardens to heal. Whether we need a spiritual or emotional boost, we find an outlet to the day’s concerns when we put our hands in the soil or simply wander and discover. Gardens can also assist healing for hospital patients and their families in trauma. The Tranquility Garden at University Medical Center Brackenridge, designed by TBG landscape architects, extends their healing mission through sensory experiences and design concepts for every gardener.

From romantic to vivacious, match a drought-tough rose to your garden’s personality with Michael Shoup of the Antique Rose Emporium.

When do we prune roses and how?

In our warm winters, roses can be pretty much evergreen. Freeze damage and just plain old leaves need to be cut off in February, along with canes that are dead. This is when we cut back to shape and downsize, too.

First, we have to be familiar with our general weather patterns, and shoot for the window between non-growth and growth. With most roses, this isn’t too difficult, since you can almost watch the buds swelling, just beneath the surface of the stems.

Most years, it’s a pretty safe bet that bud-swelling is going to happen sometime before the end of February, so that’s why we prune around Valentine’s Day. In warm winters, it happens earlier. Most likely, you’ll be fine to prune then. But, we never know what will happen, so it’s best to wait a bit. Plus, when buds are really coming out in earnest, you know where to prune.

It’s very important to prune buds that will grow outward, rather than toward the interior of the plant, in order to improve air circulation in the center. Cut the stem to about 1/4 inch above the bud that’s growing outwards.

Rose leaves usually have a lot of red in them, so frost and wind damage, which expose the red pigments, and even just normal leaf-drop in the winter, are often confused as disease issues. “Normal” color patterns in leaves will be very symmetrical and usually first appear as a red mottling near the margins. Diseased leaves will appear splotchy and the pattern will normally not be symmetrical.

And one more note on pruning: Vining roses should not be pruned until after they’ve flowered.

Shrub roses, such as Knock Out, may be pruned anytime, to keep them in shape. They can also be sheared–their bud direction doesn’t matter.

Deadhead after each flush of blooming this spring. In May, do a light pruning. Avoid harsh pruning in summer but you can tidy up. In early September, again prune lightly. 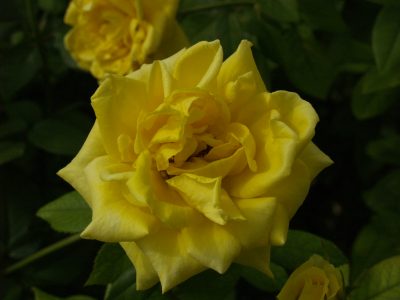 This Texas Superstar plant is a very vigorous shrub that has vibrant yellow, almost tulip-shaped, Floribunda-type blooms and very deep green foliage. It's also very thorny, so be careful not to place it too close to paths or doorways. It has a very upright and bushy habit, getting up to 5 feet tall and over 3 feet wide. Grandma's Yellow begins blooming in early spring and will be covered in flowers all summer long. As all Texas Superstars are, it is disease-tolerant and insect-resistant, a very important quality for a rose. And another important quality for many people who enjoy roses, the flowers are fragrant, with a light spicy note. They also do very well as cut flowers, remaining beautiful in a vase for many days. In order to perform well in the landscape, Grandma's Yellow needs at least 6 hours of full, bright sun a day, and it prefers well-drained soil, with a little organic matter. But it will also tolerate clay soils, as long as it is not over-watered and has good drainage. It does need a little more water than our xeric recommendations, and although it doesn't require it, Grandma's Yellow will be more vigorous and have more flowers if it's fertilized in the spring and a few times during the growing season. Grandma's Yellow looks great planted as hedges, so try it instead of red-tip Photinias, Eleagnus and Ligustrum.