Broaden your plant scope with super food plants! David Sargert from It’s About Thyme explains how to grow moringa, curry tree, neem, gotu kola, henna and more. On tour in San Antonio, Christine and Richard Alcorta found the solution for growing fresh-picked food on rocky soil: What causes browned leaves on sago palms (cycads) and why does a viewer’s spineless prickly pear look all spotted? Find out how to grow native cenizo (Texas sage). And see how to grow miniature crops in containers, including tomatoes in a bag in small spaces!

How can you grow organic food on rocky soil? Christine and Richard Alcorta solved the problem with a cinder block design for year-long harvests that end up in Richards’s 5-star recipes.

First, her sago palm (cycad) has browned leaves. Rebecca says that it faces north and has been in this spot for over five years. This year and last, it turned yellow in the winter and early spring. It had new growth last year after she trimmed off the yellowed stems.

Well, Rebecca, your sago palm is showing frost damage. Although in general, our winters are pretty mild, 2017 and 2018 had some especially long-lasting cold temperatures, which tropical species like your cycad aren’t used to.

You were right to trim off the damaged tissue last year: it won’t recover. But the new growth should be just fine, and it isn’t hard to protect such small, slow-growing plants as your sago palm from frosty temps. If the cold spell is predicted to be brief, simply cover with a blanket or heavy sheet, anchoring the fabric down at the base with bricks or other heavy objects, to make sure no heat escapes from the microclimate you’ve created underneath.

If temperatures are freezing for a longer period of time, you could add a string of Christmas lights to the equation, being careful to provide some sort of frame to hold them, so as not to cause a fire hazard. And be sure to use some of the older-style lights, not the new LED ones, which don’t produce enough heat.

Rebecca’s spineless prickly pear is spotty and a little bleached looking. This appears to be some sort of physical damage, possibly frost, or maybe insect damage, or even hail, that’s now led to open wounds where microbes have invaded and caused some tissue decay.

This opuntia is also severely infested with scale insects which you suffocate with neem oil in the cool of the evening or morning.

Once you notice new growth, remove the new pads, and replant. Unfortunately, the mother plant will not recover. 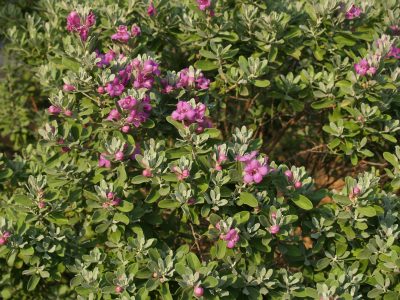 Texas sage is also known as Texas sage, purple sage, Texas ranger, and many other common names. Cenizo is extremely drought tough and needs very little water once established. In fact, this shrub does not like 'wet feet,' so be very careful if planting in clay soils. Cenizos require full sun to bloom and be healthy, and really don't tolerate shady areas. There are a multitude of different varieties of cenizo to choose from, differing not only in leaf and flower color, but also in height and width. So when choosing this plant, be careful to get a variety that has the characteristics that you want, especially when it comes to size. Cenizo does not respond well to heavy pruning, so if it outgrows its space in your landscape, you won't be able to prune it back and keep it smaller. Overly-pruned cenizos will show lots of die-back, especially in the center of the plant, with only a little growth at the tips. Unfortunately, this shrub is often planted in rows and sheared back to make a hedge. This is not a good practice, and will cause the shrubs to look very ugly, twiggy, and almost dead. Which they will be, since most of the living tissue will have been removed. The most common cenizos have gray-green leaves with light lavender flowers. But you may also found varieties with a greener leaf and deeper lavender blooms. More rarely, you may even find some with white blooms. Some will also have more and larger flowers than others, giving you a wide palette to choose from. I have seen Texas sages abandoned by the side of the freeway in El Paso, happily blooming their heads off in the full heat of summer, after the rainy season has arrived. These west Texas natives are also known as barometer bush, because they bloom in response to heat and relative humidity, leading some to say that they are good predictors of rain.

See how to grow miniature crops in containers, including tomatoes in a bag in small spaces!