Need an easy care herb for an evergreen border and spicy culinary taste? Herb ‘n Cowgirl Ann McCormick packs a peppery punch with perennial winter savory. Daphne feeds the bees with spring-blooming annual larkspurs. Find out: Are oozing splits in a redbud tree cause for concern? Compost happens: Get Trisha’s tips to make the best fertilizer. On tour in San Marcos, Lydia Kendrick weaves together a garden of many levels.

In San Marcos, weaver Lydia Kendrick unites multi-level gardens with vivacious color. As she re-graded her sloping yard to control flooding, she designed cozy corners and uplifting views with recycled finds, fragrance and hand-made weavings, even from recycled plastic bags.

Why is a redbud trunk splitting and weeping?

Gail Allen noticed strange cracking on her redbud tree. In mid-autumn last year, the tree began weeping in some of the branch angles, eventually creating these gnarled areas.

One problem that leads to weeping wood is slime flux, which, like other bacterial infections, has a distinct odor. But Gail said there was no odor to the sap, and the canopy was not affected, both of which are very good signs that disease is not the issue here.

But since plant diseases are often tricky to diagnose, we consulted Texas A&M AgriLife Extension plant pathologist Dr. Kevin Ong, who agrees with us that this is likely the result of environmental stress.

Over the last several years, prolonged drought and excessive heat have been detrimental to plant health, especially trees. Without sufficient resources, plant growth slows, and may become weaker.

But then, we had periods of abnormally high rainfall, and plants were finally able to grow—a lot—leading to heavy branches. This can stretch limbs apart, exposing interior plant sap, which would oxidize, or might attract opportunistic microbes, such as sooty mold, either of which would cause the black ridges seen here.

The tree already seems to be healing over nicely, and Gail says that the weeping has stopped. The best way to keep this from happening again would be to water the tree well during periods of drought, which would lead to stronger, more stable growth over the long term. 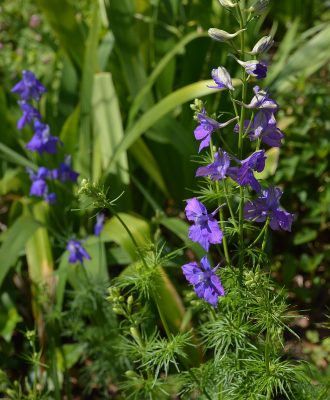 Annual larkspur spikes up the cool weather garden with feathery leaves and layers of thumbnail-sized flowers that attract lots of bees! And, supposedly they are deer resistant. There are many varieties of this hybridized heirloom that vary in height and colors: purple, pink and white. Larkspurs are super easy to grow as long as you give them full sun and decently well-drained soil. Sprinkle them around perennials that go dormant in winter for pop-out color and bee food until warm weather bloomers return. In Texas and warm winter climates, sow seeds in fall or pick up nursery transplants in the spring. Water seedlings (like any wildflowers) if rain misses your garden. Swaths of larkspurs are totally lovely, but thin crowds to allow ample airflow in humid springs. Although water is welcome, don’t overwater. Blooming for weeks, cut a few to bring indoors or to dry. After flowering, let the seed pods turn brown. Then, cut them into a bucket or bag to collect the seeds. Let them dry and store in a cool place indoors until next year. Or, let them scatter on their own for pop-up surprises next year!

Compost happens: Get Trisha’s tips to make the best fertilizer.