Urban Ecology: Why to Plant Grasses

Discover how urban prairies matter to our long term ecology. John Hart Asher, environmental designer at the Lady Bird Johnson Wildflower Center, explains what we can do at home and why to plant grasses this spring. On tour, a living wall pilot project explores success under harsh conditions. Daphne analyzes damage on a ‘Desert Museum’ Palo verde and why it happened. Plant of the Week is native blackfoot daisy to attract pollinators on rocky, well-drained soil. John demonstrates container options to grow food and flowers in small spaces.
Linda’s blog!

What exactly is a living wall and how can it change our future? The University of Texas School of Architecture and the Lady Bird Johnson Wildflower Center collaborated to explore techniques in harsh conditions.

Urban Ecology: Why to Plant Grasses

Discover how urban prairies matter to our long term ecology. John Hart Asher, environmental designer at the Lady Bird Johnson Wildflower Center, explains what we can do at home and why to plant grasses this spring.

What is causing the bark damage on my ‘Desert Museum’ Palo verde?

Thanks to John in Southern California for this great question! The bark on the trunk of his ‘Desert Museum’ Palo verde has square chunks neatly carved out. Since we knew this wasn’t caused by disease, and it didn’t look like deer damage, we consulted David Cristiani, a landscape architect in New Mexico. He tells us that this appears to be rabbit damage, which he’s seen on smooth tree trunks like this one, usually during winter, and during drought, when moisture is in short supply for all living creatures. He says the damage seems to be about the animal trying to get moisture out of the trunk, eventually girdling and killing the tree, if it continues.

David also says that he’s observed young, smooth-barked trees such as desert willow, ash, and pistachio being gnawed by multiple cottontail and jackrabbits for several days in a row, then the trees are dead.

Nearby older or rougher-barked young trees like mesquite, oak, and juniper are left alone.

When we got back in touch with John about his Palo verde, he reported that he had indeed started noticing rabbits last year, and that even though rabbits had always been around, they’ve never been so visible. Yes—it’s been dry in SoCal!

To further illustrate the point, David also sent us pictures of an Opuntia macrocentra that had been chomped by jackrabbits or cottontails, or maybe pack rats. He says that usually the pack rats eat cacti from burrowing under the roots and getting their moisture and roughage that way, in order to avoid the spines. 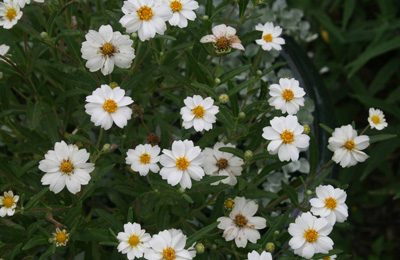 This Central Texas native plant is a short, slowly creeping perennial that blooms almost full time! It's a perfect plant for edging beds or to tumble over rocky outcroppings. Blackfoot daisy likes alkaline soils. It's great for rocky areas and to complement other low-water use plants. It loves full sun, but it's also great in light shade. It does require well-drained soil. It gets about 6-12" tall and about the same width. Blackfoot daisy blooms from early spring through fall. It self seeds easily, but it's not invasive. But, it can be challenging to deadhead. Just give it a haircut now and then to remove spent flowers and encourage more flowering. Blackfoot daisy is hardy to well below zero and is equally hardy in our hot summers. It is said to be deer resistant.

If you’ve got a small space or the only sun you have is on the driveway or patio, self-watering containers and garden grow bags are the solution! John Dromgoole shows a few options, even for growing in hanging containers.