How can we maximize rainwater in drought? Landscape architect Kenneth Francis illustrates water management designs from experience in New Mexico and Texas. On tour, Earth Camp fifth-graders at the Becker Elementary Green Classroom teach wise lessons on watershed protection. Pump up those iris blooms with Daphne’s tips on fertilizer. Daphne explains when to fertilize iris for fabulous flowers. Get growing asparagus with John Dromgoole’s tips.

From the mouths of babes, get wise lessons on watershed protection from Earth Camp fifth-graders at the Becker Elementary Green Classroom. See how garden chemicals make their way to our drinking water, which plants provide the best filtering, and how to make a rain garden to keep water right where we need it.

How can we maximize rainwater in drought? Landscape architect Kenneth Francis illustrates water management designs from experience in New Mexico and Texas.

When and how do I fertilize irises?

Iris flowers are so pretty that if you’ve ever had a year with no blooms, and most of us have, you want to do whatever you can to ensure a good spring show.

Fertilizing definitely plays a key role in blooming. Note, though: over-fertilization can just as easily cause problems as not fertilizing at all. As with most plants, too much nitrogen leads irises to concentrate more on green growth at the expense of flowering, and sometimes to even avoid blooming altogether.

With irises and other flowering plants, use a fertilizer that has one a high middle number in the 3-number ratio on the package, which means a higher amount of phosphorus relative to nitrogen, the first number, and potassium, the third number.

But even more important than a high middle number for many flowering plants, would be a very low first number, which means a LOW amount of nitrogen.

Reducing nitrogen for flowering plants is just stress-inducing enough to switch their focus from green growth, or themselves, to blooming, which will lead to the next generation.

So, back to WHEN to fertilize. Here in Central Texas, our winters are most often either non-existent, or gone in the blink of an eye. But we usually have a roller coaster of warm days and at least one late frost. So fertilizing too early can be damaging for many plants. But not for irises.

Either they’re evergreen or leafing out already, so aren’t usually damaged by a late spring frost.

Mid-February to early March is a good time to apply fertilizer. Most of the iris-specific fertilizers you see will have a 6-10-10 ratio, which would work very well to boost the blooms and lead to an overall healthy plant. You might also fertilize again, lightly, just after blooming, to assist the plant with recovering the energy it expended on those flowers.

Other reasons for lack of flowers: too much shade or overcrowding. Ideally, we divide in fall to get those spring blooms. But if you do it in spring, the plants will be healthier but they won’t bloom until next year. 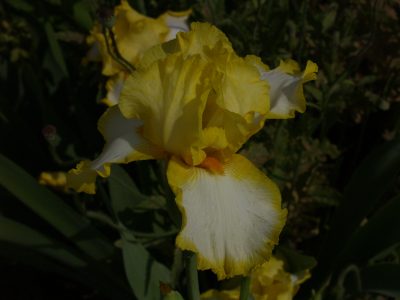 Iris is a super tough, drought-tolerant genus of plants, with many species, that do fabulously well in Central Texas gardens. And they're virtually indestructible, making them the perfect plant for both beginning gardeners, who need some successes to boost their confidence, and more seasoned folks, who need at least one or two garden beds to be easy-care. Irises are available in almost every color in the rainbow, from vibrant, glaring purples and yellows to the most muted lavenders, creams, and blues. And with so many different sizes, colors and types to choose from, it will be very difficult not to end up planting more Iris than you had planned on. Bearded Irises are perhaps the most familiar to most people, but there are also German, Siberian, Japanese, and Louisiana Irises. Some grow best in full sun, while others need a bit of shade. And some Irises, such as Siberian and Louisiana, prefer boggy, soggy soil. So if you have heavy clay, these plants may be perfect for you. Although gorgeous, Iris blooms don't last long, but the foliage is beautiful too, providing a nice sculptural element to the landscape. Like roses, Irises are an old-fashioned plant. Growing from a large underground stem, Irises are very easy to divide and pass along. The non-boggy species require very little water to survive and thrive. Irises are perennial, so they'll go dormant in early winter. In winter, be sure to cut the leaves of your Iris completely to the ground, and clean away any garden debris in your iris beds. Slugs, snails, and a whole host of insect larvae will happily overwinter in leaf matter, just waiting to munch on all the stored carbohydrates in your lovely Iris rhizomes, before they have a chance to grow and sprout with warmer temperatures.