What’s That Beetle Up To?

Meet the beetles with entomologist Mike Quinn who identifies the good guys in your garden. On tour at Natural Bridge Caverns, see what we put on top ends up in our aquifers. Daphne answers: how long can we store pecans and when to plant? Her pick of the week is Sparkler sedge to brighten up shady spots. John Dromgoole shows how to fend off pests, like squash vine borer, and how to keep the beneficial pests.

We tend to see what’s on top of our gardens or a few feet under where we stick a shovel.
But what’s going on 25 feet below? At Natural Bridge Caverns, just north of San Antonio, Texas, see how what we pour on top ends up in our aquifers.  NBC’s organic garden design works in the small backyard, too: plants for pollinators and birds, larval food, paths that invite discoveries, and spots to sit back and laugh watching birds in their baths.

What's That Beetle Up To?

Meet the beetles with entomologist Mike Quinn who identifies the good guys in your garden.

How old can pecan seeds be to grow? And when do I plant?

Thanks to Richard Lopez for this great question!

He stored pecans that were harvested in November 2012 in an enclosed container, stuck them in his pantry, and then forgot about them.  Finding them recently, Richard was curious, are they still good to plant and will they grow?

For this one, we consulted with Extension fruit specialist Jim Kamas in Fredericksburg, who works extensively with growers in the pecan and peach industries. Jim pointed out that just like peach seeds, pecans need to receive winter chilling in order to germinate.

So if planted right now, in May, after having spent two years in a pantry at room temperature, they won’t have received any chilling whatsoever, so none of them would germinate. If the pecans have been stored cool and dry, which it sounds like they have, there’s a chance that the embryo in some of them is still viable. So yes, some of them MAY germinate, although far fewer than if they’d been planted a couple of years ago, right after they fell from the tree.

Since they have not received any chilling, none of them will germinate if planted right now, in late spring.

The best course of action would be to wait until this fall, around Thanksgiving or so, then plant the pecans, either in buckets or in a nursery row six inches apart.  Being outdoors over winter, the pecans will receive enough chilling naturally, and some should germinate next spring. Make sure the nursery row stays moist, but not soggy, and the same is true if you planted the pecans in buckets or other containers. If you use buckets, make sure to punch some holes in the bottom for drainage. You could also use planting containers instead, just make sure you have plenty of room.

If you’ve ever tried to pull a stray pecan seedling out of your yard, you know how deep that tap root goes, so normal-sized seed starting flats are most definitely not appropriate when sprouting pecans. 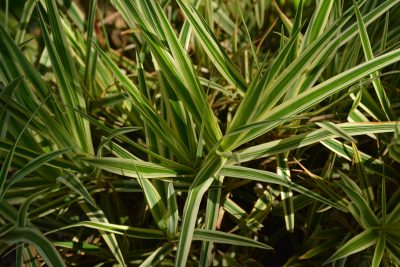 With so many of older Central Texas neighborhoods, finding plants that will grow in the shade of our beautiful native live oaks is key. And sparkler sedge makes a great choice among all of the many deep green choices of our normal shade-loving plant palette. Sparkler has beautiful white and green striped variegated leaves, which are whorled around the central stem, creating the same effect as a 4th of July sparkler. As with most shade-loving plants, it needs a little extra water, but really not that much. Shady areas of the garden tend to lose less water anyway, so you really don't have to water them any more than the rest of the yard. Sparkler sedge does best in bright shade, with perhaps only a few hours of morning sun. You may see it listed as partial sun" in some references but that most definitely does not apply to the intensity of sun in the Southwest. It stays fairly small.

John Dromgoole shows how to fend off pests, like squash vine borer, and how to keep the beneficial pests.