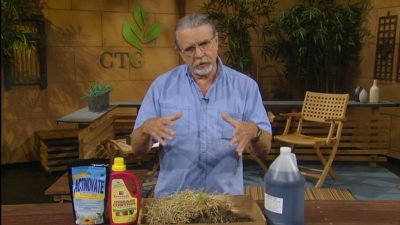 This disease, brown patch, is also known as Rhizoctonia and what is does is it starts out and starts dying in the grass and sometimes there a little halo almost, like a smoke right around the growing part.

You see it growing out in your lawn out there. People start bombarding it with pesticides and other chemicals not knowing really what it is. But if you’ve got a Saint Augustine lawn and the temperature has now dropped below 85 degrees and it’s in that range of 70 to 85 degrees and it’s cool and moist, you’re going to get brown patch.

Try to water early in the day. That’s really one of the more important things to know is watering early in the day so it’s dry before the
evening. That’ll help quite a bit.

Recognizing brown patch out there is pretty simple. Right now as I’m doing this segment, the brown patch is not active. So I don’t have a piece of it to show you other than a picture of what the ring looks like. But, in the disease, we’ll find that these little leaves right
here running along, this is the stolon right here, and running along the stolon are the leaves.

In brown patch, these leaves turn brown and they actually slip right off the plant. They get brown and fall right off of there. This might be a little example of what might be coming off of there and what it looks like. It would be all of them though, not just these. Although this one is on there, it’s not an indication of brown patch on this thing, just some summer stress. But these will all turn brown.

The important thing in recognizing the disease, the stolons are still green. That means that the grass is going to come back. It’s not
going to die even though the disease hits it. So, if you did nothing at all, the disease would not kill the lawn. It would just make it look bad. Which is bad enough actually. But it would look bad and distress it going into the wintertime. So what we would like
to do it try to prevent this kind of problem.

If you have a lot of thatching material growing down between the soil and the grass itself, this is where a disease can stay and harbor over and be hard to penetrate with any of the treatments that you might use.

So the first step I would do, late summer here, early September, anywhere in that time zone, go out there and dethatch these areas that have had problems in the past. The disease organism could be in there and that would be helpful in removing that.

Drainage can be a problem in some of those areas, so I would go out there and improve the drainage. If that’s a low spot in the yard and the disease starts up every time there, many of the treatments may not do the job.

Once you put the compost out there, another thing I would begin to use is called corn meal. Good, stone-ground whole corn meal applied at the rate of one pound per hundred square feet.

One pound in a hundred square feet, usually mixed into the compost, would be the very best thing to do. What’s happening when you use the corn meal, and it’s also a type of nitrogen, it’s about nine percent nitrogen. But what happens when you use the corn meal is it feeds an organism that lives in the compost. That organism is called trichoderma. Trichoderma helps to suppress Rhizoctonia, or brown patch. So this is a good other way to prevent the disease from happening out there.

Actinovate is a Texas made product that stops diseases. Now what this does is it coats the root system with an agricultural streptomyces and this organism stops the disease from getting into the plant. It’s also good for many other garden disease problems with root systems. Here in the fall, if you put this on right now, it’ll colonize the root system and the disease won’t get started at all. Whether or not you use compost, it works extremely well.

Another thing we like to use out there is aerobic compost tea. This is very effective about bringing in beneficial organisms.

If things are underway before you notice it, there are products like this potassium bicarbonate right here. This is an excellent product to mix with water and spray the area.

For lawn and turf diseases. It controls brown patch and several other lawn diseases. And it’s all garlic. www.Garlicgp.com