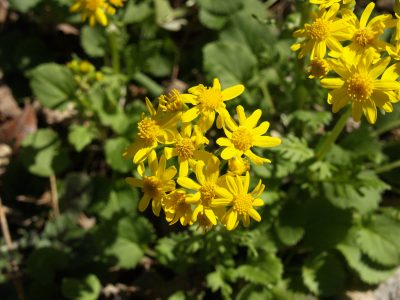 This Central Texas native plant is a great flowering groundcover for shady areas of your landscape, but it also does quite well in morning sun. It’s a perennial that spreads by running, above-ground stems that form plantlets on their ends when they touch the soil.

Lawn grasses grow in the same manner, so you know that this plant should fill an area in nicely, and quickly. Another great thing about golden groundsel is that with a little water through the winter, it’s usually evergreen, so it gives some color to our otherwise brown winter yards. And then in very early spring, this plant bursts into growth and becomes covered in cute, little yellow, daisy-like flowers.

Being evergreen and flowering so early, this plant is a great source of pollen for our struggling bee population before other flowers begin to emerge. This plant has survived some of the coldest and hottest, and driest and wettest Central Texas seasons on record, so if you have some bare spots now, and who doesn’t, give it a try.