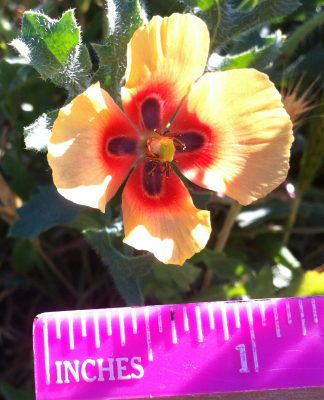 Beneficial plants or noxious weeds? That describes both horned poppy and Buffalo bur.

In May, Storm Hardin ran across a new plant growing in her horse pasture. About 8 inches tall, the leaves are blue green in color. Its petals change color over time, going from red to white and finally to orange. Peckerwood Garden’s Director of Horticulture Adam Black identified it as a Glaucium, possibly species corniculatum, an exotic that’s naturalized in Texas and many other parts of the country. Adam notes that the common name, “horned poppy,” is due to the long seed capsules. We can’t recommend planting it, but thank you for educating us all, Storm!

And Mike Dunn spotted this prickly plant growing where he’d sown tomato seeds. This is Buffalobur nightshade, Solanum rostratum, also called simply Buffalo bur. According to Andrea DeLong-Amaya, Director of Horticulture at the Lady Bird Johnson Wildflower Center, its seeds can be transported on animal fur, so perhaps they lay dormant in the soil until Mike began to cultivate it for his tomatoes.

Buffalo bur is a drought-tough native plant and its flowers provide nectar to pollinators. But it’s highly toxic to humans, and is considered a noxious weed in some states. It’s also very painful to remove, so wear long, heavy gloves when digging it out. It’s an annual, so remove flowers to prevent it from spreading or returning next season.