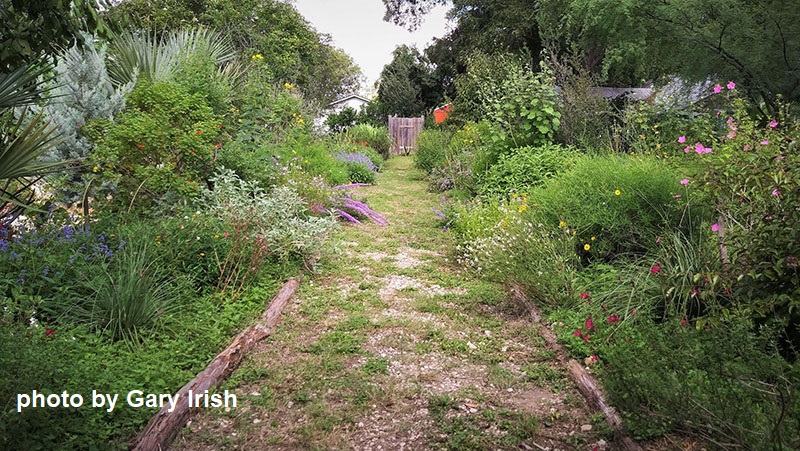 Mary and Gary Irish’s Tex-Mex Mixed Border in Castroville Texas
2020 status
Mixed Borders – Concept and History
Long beds filled with a variety of flowers perennial plants and shrubs. These often “border” walls or paths. The concept of perennial and mixed bordered was popularized by Gertrude Jekyll and William Robinson, two English gardeners and writers who lived in the late 19th and early 20th century. Their concept of soft flowing drifts of mixed plants was a reaction to the repetitious and rigid blocks of annual plants popular in the late 19th century. Their borders and ones built in the Eastern U.S. contain a variety of plants that do well in those areas. But it must be remembered that borders are a gardening and planting concept. They are not dependent on any particular species. We thought since Texas has so many great native flowering perennials and shrubs that it would be great fun to plant a border of all native plants. So we came up with the concept of the Tex-Mex border since we have planted it with all Texas natives and threw in a few from Mexico. It’s the gardening equivalent of Tex-Mex food!
The Irish Tex-Mex border -Chronology and physical size
Initial bed layout 2013
First planting 2014
Completion of initial plantings 2016
The border is bisected by a path that is 67 feet long. The two 67 foot beds on each side of the path vary in width through their courses but are approximately 6 feet wide, making for a total of approximately 804 square feet of planted area.
Plants in the border – 84 total species or cultivars
79 Texas natives
6 annuals
3 ground covers
2 trees
68 perennials or shrubs
5 species native only in Mexico
Plans for more work on the border
Place limestone flagstones on the path
Place small limestone blocks along the edges
Continue to plant more species and cultivars, focusing on unusual or lesser known plants
Photos for Central Texas Gardener
1. 2014 – bordered path developed and initial planning done placement
2. 2018 – 4 years of plant growth the border is more or less completed.
Basic principles of designing a border.
– a wide variety of plants will provide flowering almost the entire year. Only in January do we often have no flowers. All other months something is blooming
– Plant short plants in front next to the path, medium sized plants in the middle and tall plants at the back, farthest from the path.
3. Gaura lindheimeri – Gaura, Lindheimer’s beeblossom. Some subsume it under Oenothera – O. lindheimeri
4. Viguieria stenoloba – Skeleton leaf golden eye. Native to very dry area in Western part of Texas and in New Mexico. Flowers almost all year round.
5. Symphyotrichum oblongifolium – aromatic aster. Native to much of the central U.S.. Flowers in Spring and Fall.
6. Ageratina havanensis – White mist flower, shrubby boneset. Hill country native. Gets its name havanensis because it is also native Cuba. Does well in sun or a reasonable amount of shade. Fabulous butter fly plant. Flowers in Spring and Fall
7. Trixis inula – Trixis, Native to Lower Rio Grande Valley. Fall flowering. A great butterfly plant. Has a light but nice fragrance.
8. Sphaeralcea incana- Gray globemallow. Native to TX, New Mex., AZ. Flowers spring and Fall
9. Echeandia texensis – Texas shooting star, Texas crag lily. Texas does not have a lot of native bulbs but this is one of the nicest. Dormant in winter, leaves dies to the ground. Flowers in Fall.h
10. Anemone berlandieri – Ten petal anemone. Native to TX and the SE U.S. This is one of the plants in the Tex-Mex border that was provided by Mother Nature. When doing maintenance (i.e. weeding) we leave this plant and over the years it has increased considerably. It is dormant in the summer, fall and winter but flowers prolifically in spring. It is the first plant to flower in the border. Flowers starting in February, sometimes even late January. It returns every years from a large fleshy tap root.
11 Gaillardia pulchella -fire wheel. This is another plant provided by Mother nature. Rather than a perennial coming back each year. This plant in our garden is an annual coming back from scattered seeds. Every year when it goes to seed we pull up the dried plant and walk along the path and shake the dead plant and seed heads over the border beds. That’s all it takes.