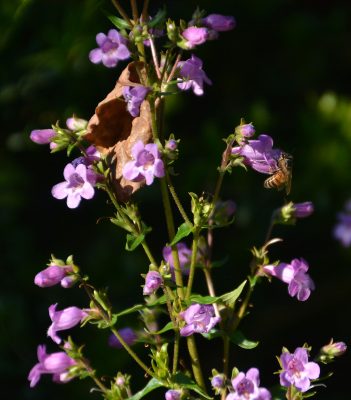 Our plants this week are a couple of Penstemons: Brazos, Penstemon tenuis, and prairie, Penstemon cobaea. Although these two beardtongues, as both and many of their relatives are commonly known, have slightly different growing conditions, they have many similarities.

Both have large, bell-shaped, purple flowers, occurring in stalks that shoot up from the base of the plant, which serve as a food source for bees, butterflies and hummingbirds. Both are perennials that are hardy to zone 7 or below, both love the full sun, but can take partial shade, and both flower in spring, with Brazos penstemon normally blooming a little earlier than prairie.

Brazos is also known as Gulf Coast penstemon, where it is native in Texas, and so prefers a bit heavier soil and a bit more water, while prairie is native to drier regions, and prefers a bit more soil drainage and a lighter touch with the irrigation.

In the proper soil conditions, both are low-water use plants, requiring supplemental irrigation only during the driest, hottest times.

Plant in fall or early spring, and prune to the ground after seed heads are dried, if you’d like to collect the seeds or to let them spread themselves! Otherwise, you can prune them to the base of the plant after blooming. Seed heads are slow to mature and they may not dry until mid-summer.

Mature height for both plants is listed at one and a half to two feet, which includes the flower stalk, with prairie penstemon spreading to only about 12 inches in width, while Brazos spreads to about 18 inches.