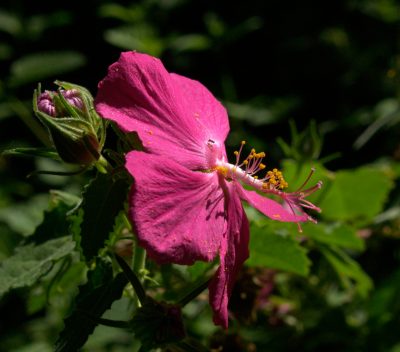 Rock rose (Pavonia lasiopetala) is a tough little native beauty that usually gets about 2 feet tall, but can get much taller. And it spreads nicely, filling out to around 3 feet wide.

Pavonia is covered with pink blooms from spring to fall, even during the brutal 100 degree stretches that we see so often these days. The on-going flowers feed bees, butterflies, and other beneficial insects.

The flowers are very simple, with 5 large petals and a distinct central column formed by the fused pistil and yellow stamens. The rock rose flower might remind you of the larger flowers of a hibiscus, and for good reason. They’re both in the same plant family: the Malvaceae, better known as the mallow family.

Rock rose is native to rocky, disturbed soils, hence its name, so be sure that it gets plenty of drainage in your garden. And it is a prolific reseeder, a strategy that ensures its continued existence through tough times. If planted in flower beds that you prefer to remain nice and tidy, you’ll be spending a fair amount of time pulling errant rock rose seedlings. So you may want to put this plant in a more natural, free-form area of the garden.

Pavonia thrives in the sun, but can be perfectly happy in part shade. And with just a little bit of supplemental irrigation, maybe once a week or so, during the driest of times, it keeps right on growing through our awful heat. It does tend to wilt during the day, but that doesn’t necessarily mean that it needs water. You’ll notice that it’s right back to its cheery self the next morning, without any irrigation at all.

Rock rose is also prone to powdery mildew, but just ignore it. The plant certainly does.

Prune it now and then to restore its shape and promote new growth. You can do a harder prune in late winter. If you want to move its offspring that seed nearby, do so in the cooler months.