Since heat, humidity and drought are upon us already, let’s stop a moment to celebrate Bloom Day in Central Texas!  By next month, if this drought keeps up, our lists will have bloomin’ dwindled. But in Indiana, they’ll just be gearing up for Carol at May Dreams Gardens, who started this monthly gardenfest.

Right now, things look a bit droopy and dreary by evening in east Austin, but there are yet a few participants this round.

Here’s a daylily at the cat cove entrance (and elsewhere, since I’ve divided it so often).  Winecup and calylophys beyond. 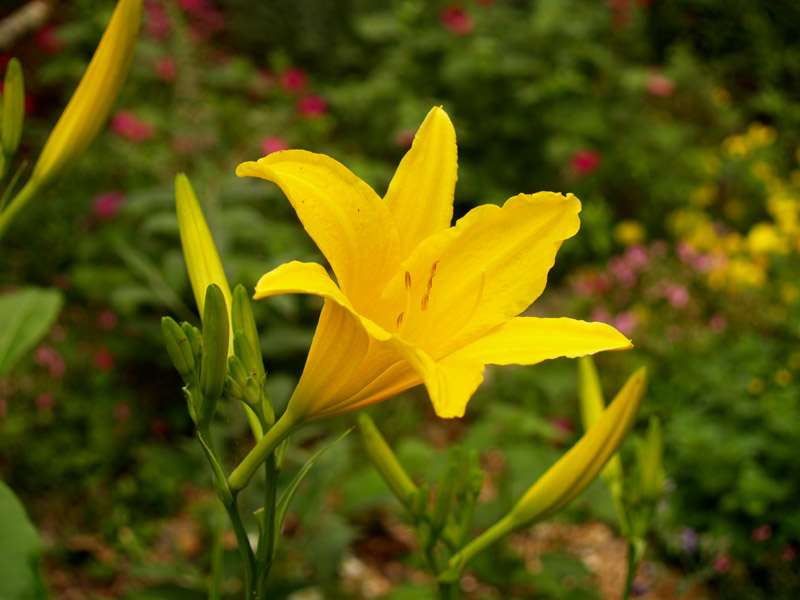 Here’s one in front with plumbago beyond, an early bloomer this year. 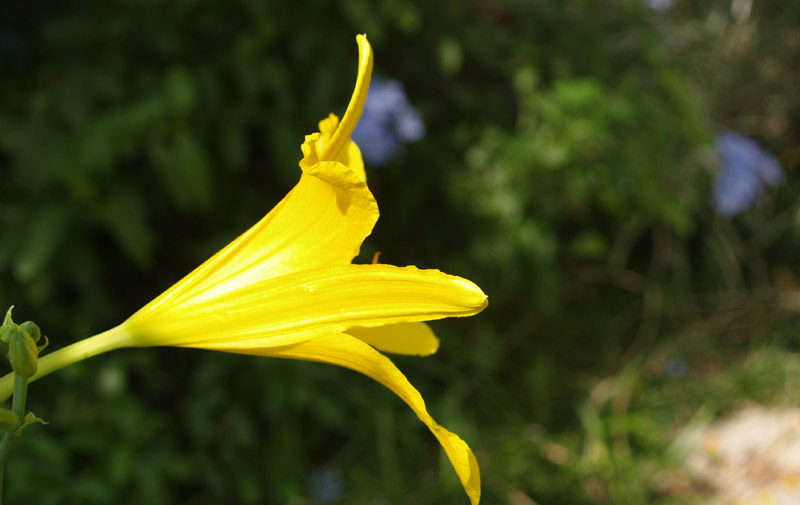 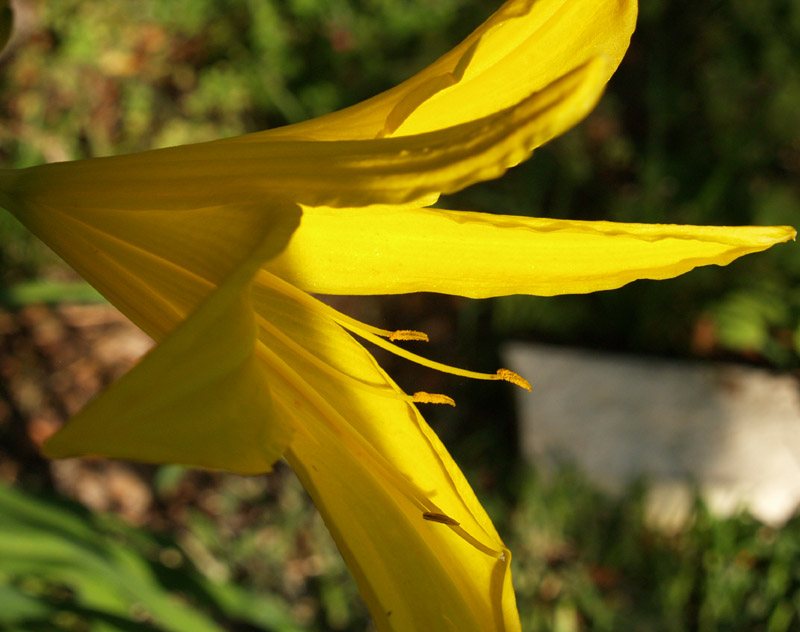 I’ve divided the daylilies for their evergreen format and spring flowers in three spots along the front beds. Yea, I could say it was design continuity, but honestly, it was because I had some extra spots to fill and the daylilies were free!

For a total serenade in yellow, my friend Holly’s passalong lanceleaf coreopsis (Coreopsis lanceolata) joins the daylilies in two spots across the front beds.  Somebody finds it attractive. 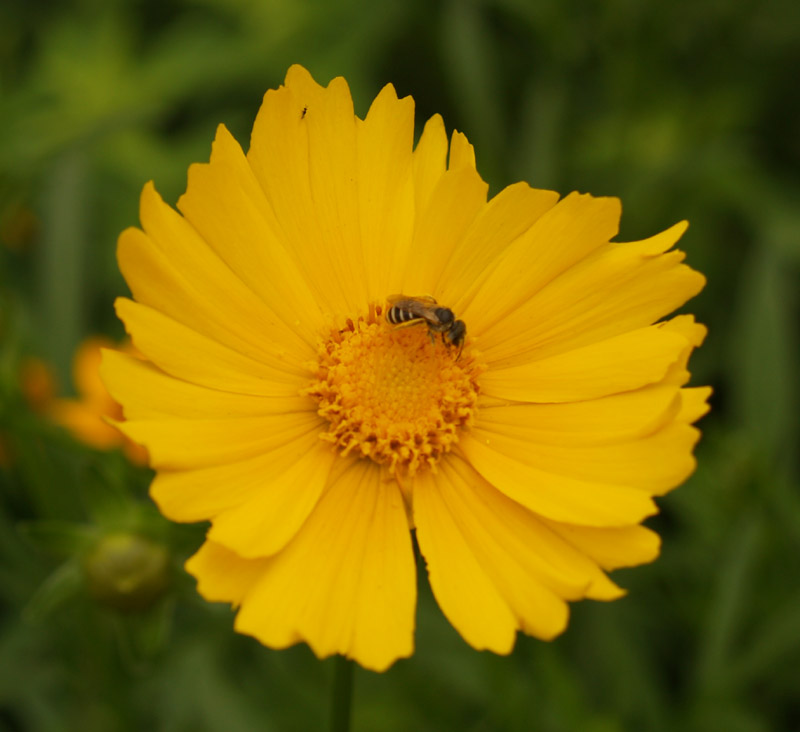 In the front room bed, here’s a wide shot of the yellows, along with larkspurs. From this angle, you can’t see the young silvery yuccas behind the recently pruned asters or the new Carex glaucas at the foundation. I like the self-seeded larkspurs so much that I’ve sowed pink and red cosmos for summer. 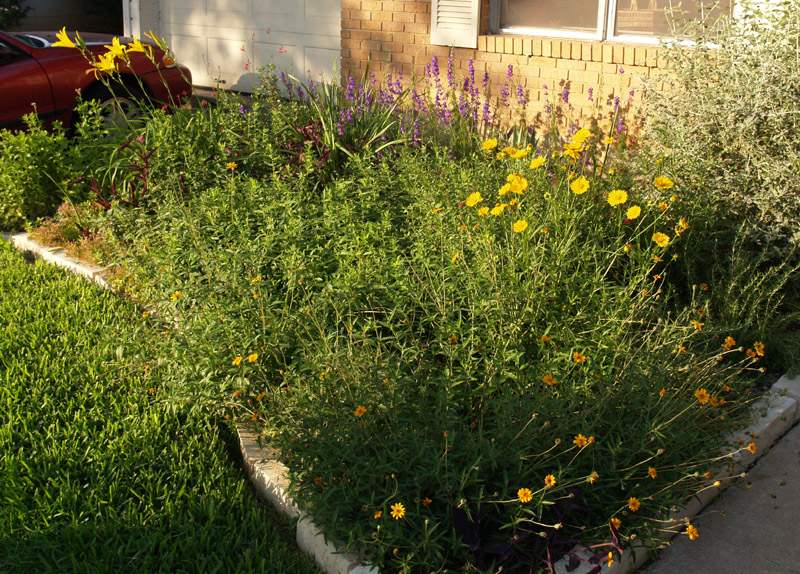 Here’s the corner zexmenia with the coreopsis.  Zexmenia is definitely drought-tough, but needs pruning to keep it going and within its appointed boundaries. I’m highly allergic to its oils, and if you have plant allergies, wear long sleeves when addressing it. 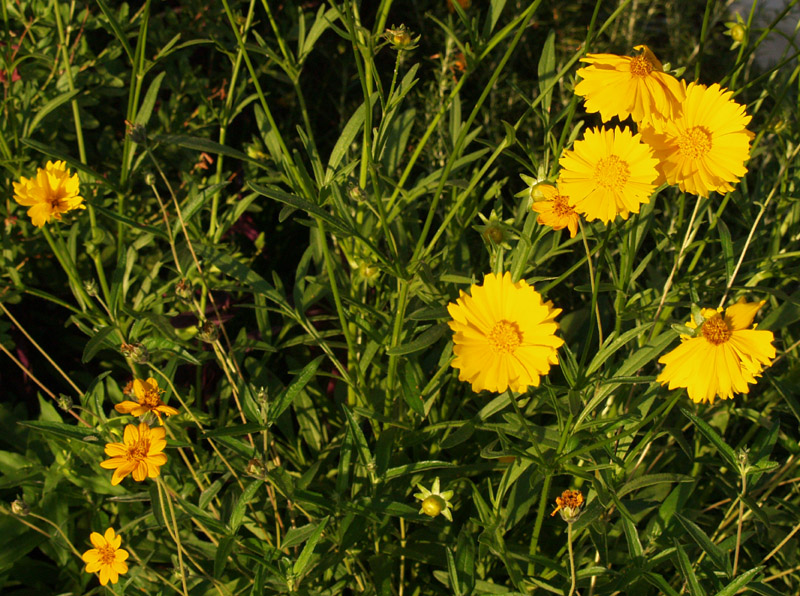 In the front curb beds, The Fairy rose likes the heat too, though it definitely took a hit in last summer’s drought. 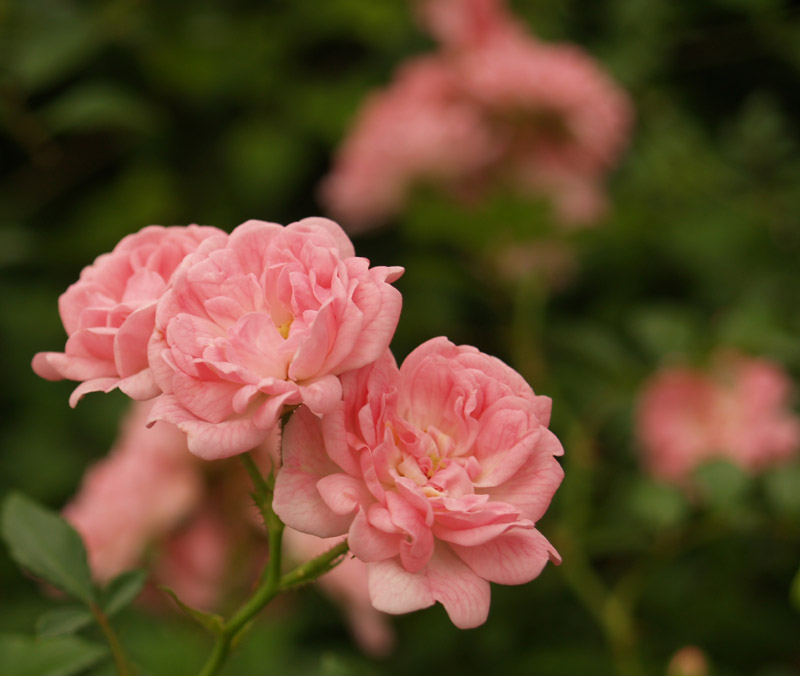 In the backyard den bed, here’s Tawny daylily that I got from the Boggy Creek Farm booth at Zilker Garden Festival a few years ago. 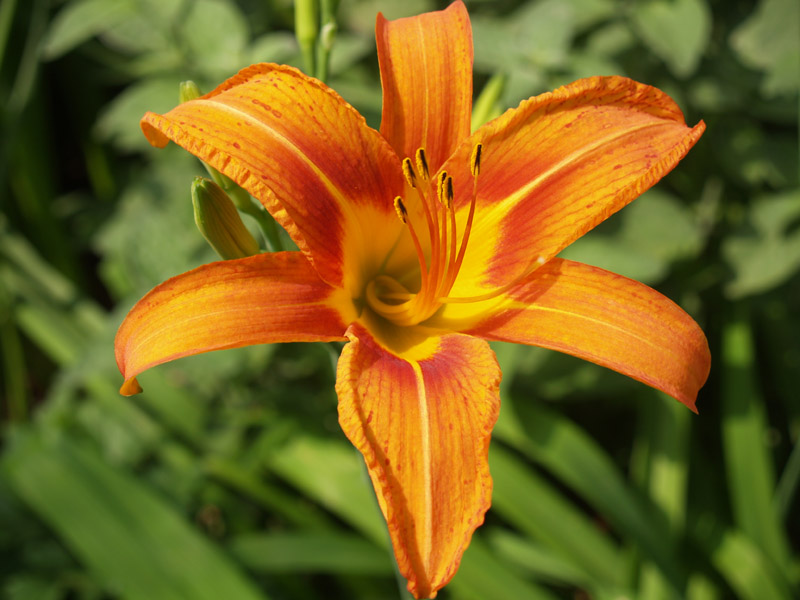 At the patio, the star jasmine shaped into a shrub is winding down, but refuses to relinquish its aromatic knockout just yet. 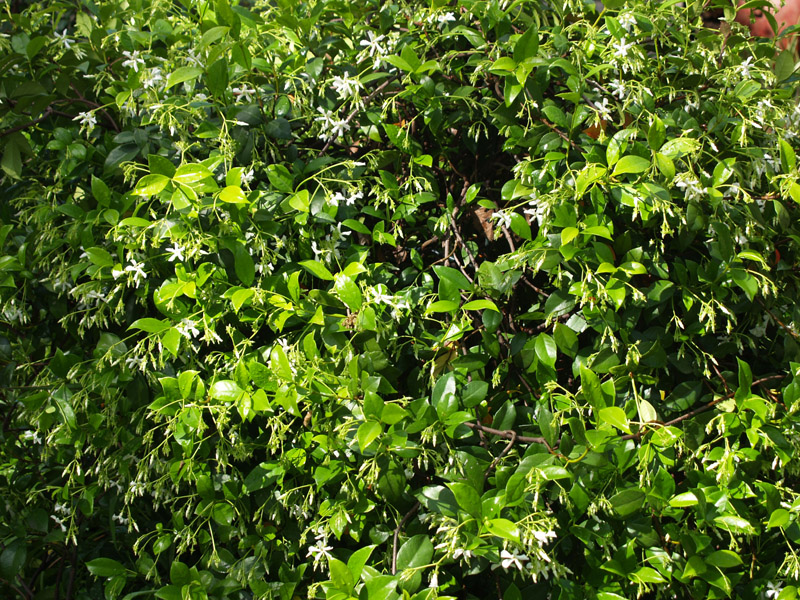 Along the back bed, the toadflax has flowered for weeks. It has a tendency to take over, but it’s easy to pull up.  It makes a good treat for bunny Harvey and his new girlfriend Gaby (more about the Gabsters another day). 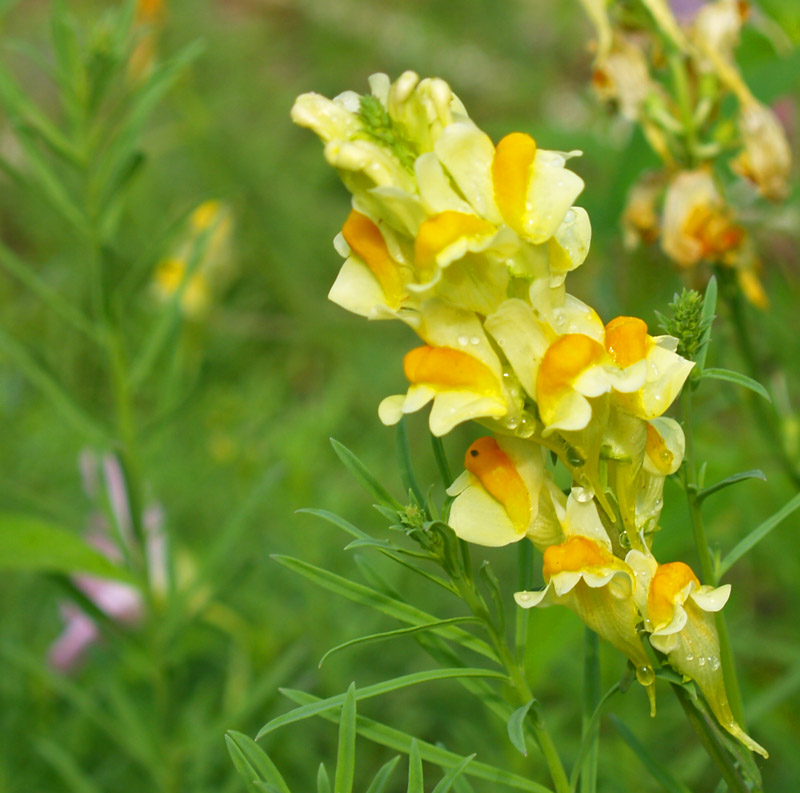 Oh, until you get the scoop on the happy couple, be assured that medical technology insures devotion just for two. Well, okay, since some of you are dying to see Gaby, here’s a playpen picture.  This was on her first night, and with all the excitement of moving into a new home, she napped between explorations. 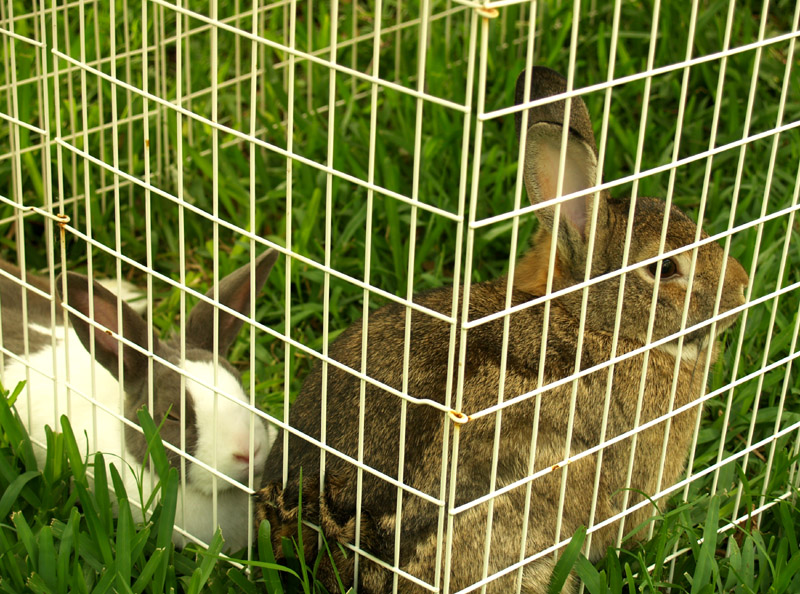 Even though the buns are fans of air conditioning, the Salvia guaranitica on the rental side bed loves the heat. Daylily beyond. 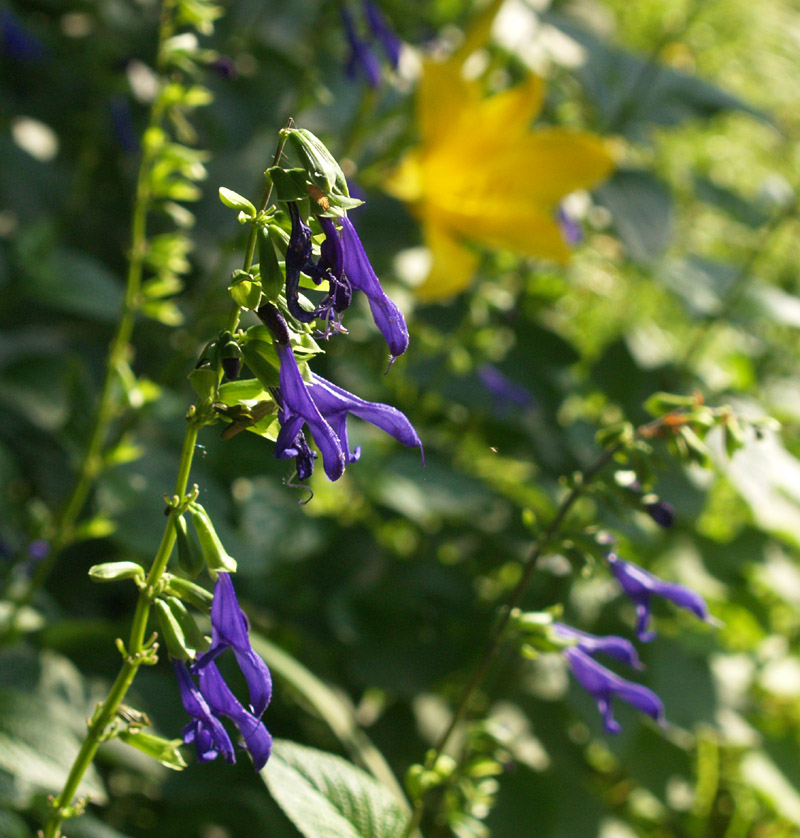 In front of them, here is Salvia guaranitica ‘Argentine Skies’.  You may recall that I moved this exuberant guy from the den bed a few months ago. It runs faster than a bunny.  But if you want to move it or share its wealth, it roots easily even if you pluck it out without tenderness. On the patio, here’s one of the old-fashioned petunias draping another pot that’s home to an Aloe aristata (Torch Plant or Lace Aloe). 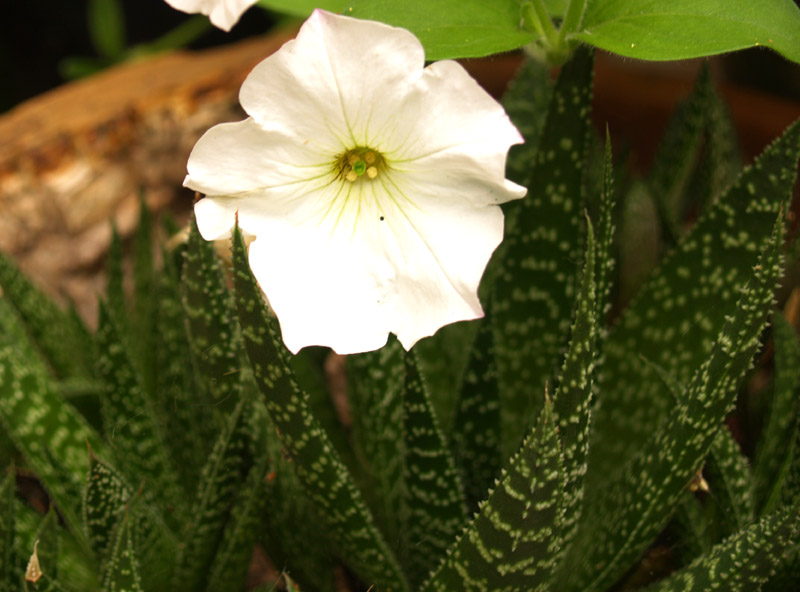 There’s tons more going on, but before you go:  For CTG viewers, this week, get ready for some great advice from designer Patrick Kirwin, who meets with Tom about palms, dioons, and agaves.  As always, Patrick has his finger on the button for plant architecture in sun or shade.

On tour, if you missed Master Gardener’s Walt Krueger’s garden last year, here it is again, hosted by fellow MG Elaine Dill.   For you shady gardeners, it’s an inspiration for all that you can really do under a canopy of trees.

For you daylily lovers or wannabees, Austin Daylily Society guru Rich Rosen invites you to a free open house to see his 800 daylily varieties and learn how to grow them.  It’s May 25 from 10 a.m. – 2 p.m.  His address:  10903 Catthorn Cove in Austin.

Back to Bloom Day, I hope this inspires you to note what’s going on in your garden on the 15th of every month.  I welcome your pictures!