Lookee here!  It worked!  My first plumeria flower ever. I never knew such a glamorous plant could be this easy. 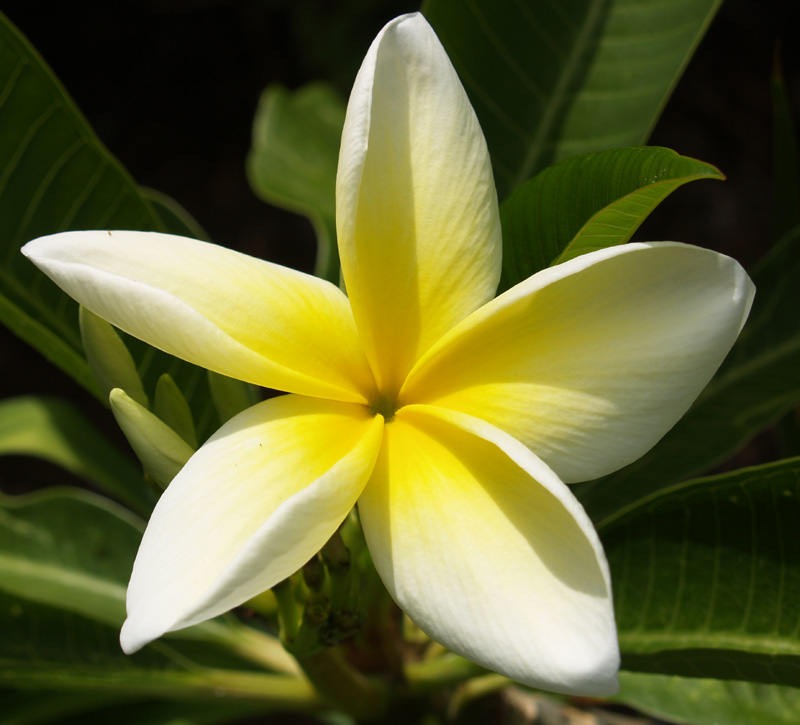 And a surprise rain lily.  It may be Habranthus robustus, but don’t take that to the bank. 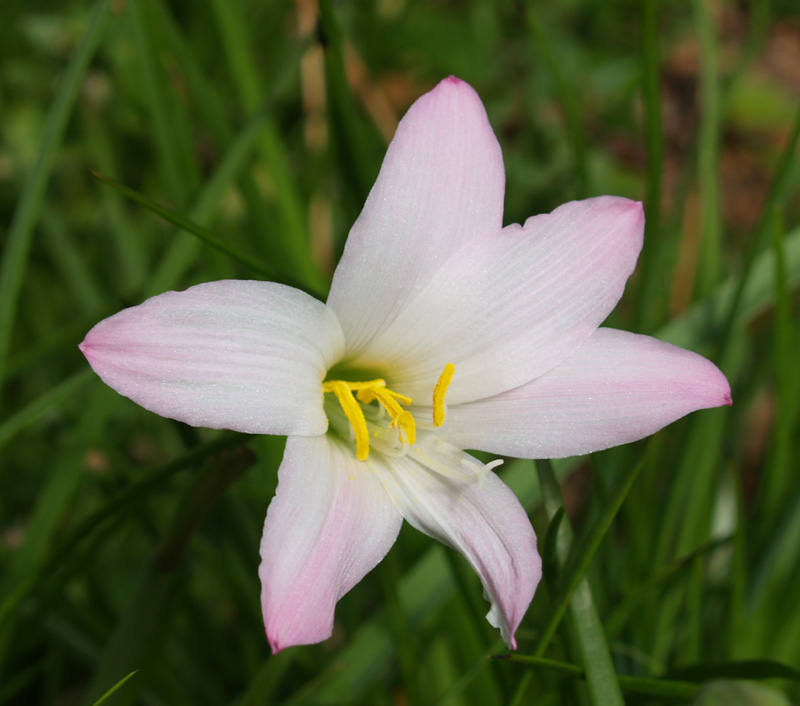 It’s also a big week for CTG, because Tom and I got to meet Chris Corby, editor and publisher of  Texas Gardener magazine. 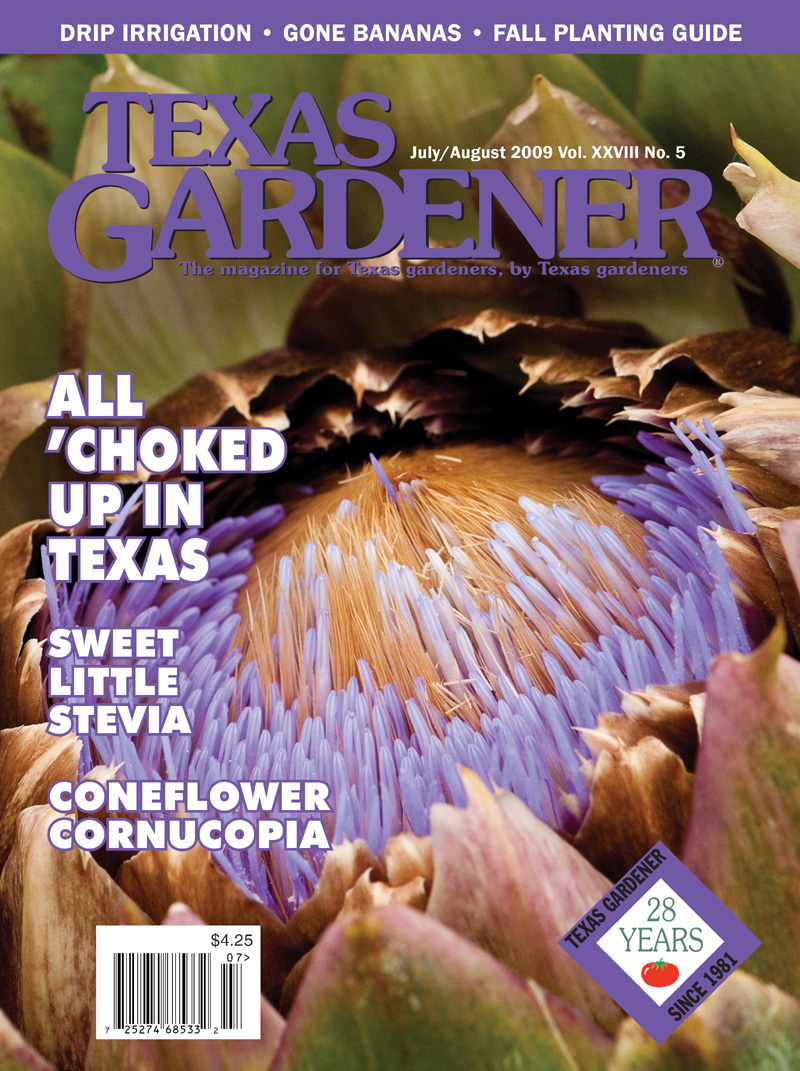 In 1981, Chris realized that Texas gardeners needed their own magazine, since, as you know, gardening here can be rather bizarre.  I rely on Texas Gardener as much now as I did when I first started out.  It’s page after page of on-target info, written by hands-on gardeners, about the vegetable garden, ornamental plants, design tips, and maintenance how-to.  I know you’ll be delighted to meet him, too, and to get his tips for summer planting and survival.

Also this week, meet two of my other heroes:  Jo and John Dwyer, the pioneers behind Angel Valley Organic Farm.  We visited them at their farm in April, as they were still harvesting lettuce and watching their tomatoes fatten up.  I said, “I didn’t know that” about 50 times that day. Even though you’ll certainly get some garden tips from this one, mainly it’s the tip we all need most:  how to follow a dream and stick with it, no matter what bizarre things come our way, including the insects that want to beat us to our hard work.

But, I’ve enticed Jo & John to join us in-studio in September to go into more detail on their how-to for summer to winter vegetable transition.  This summer I’ll be getting my new fall garden beds ready!

Meet them in person at their farm stands and fill a basket with their latest organic yummies on Wednesdays and Saturdays.  And sign up for Jo’s newsletter to follow her around for seasonal how-to and her witty perspective about life on a farm.

Another thing I learned from them:  the ultimate garden pants.  I noticed the comfy pants they were all wearing at the farm.  Men’s sleeping pants from Target.  I raced there that weekend and nabbed mine for $9.99. 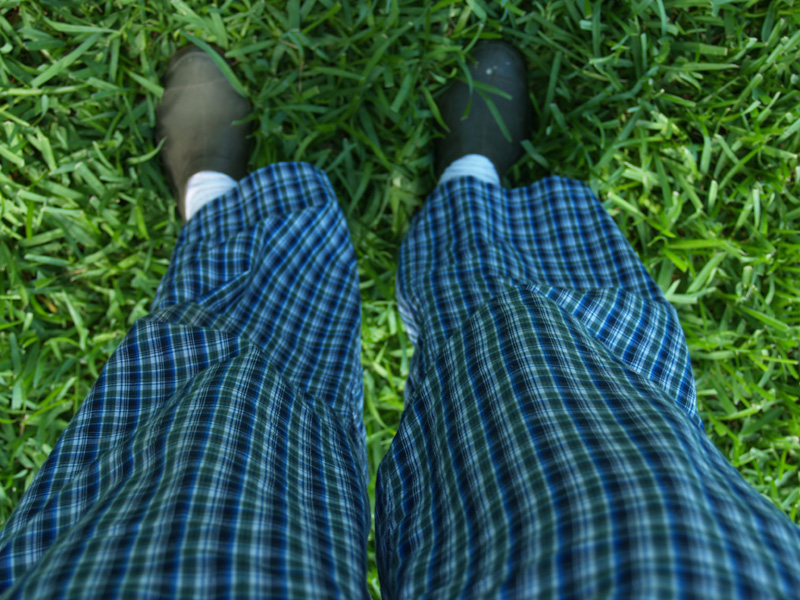 Cool, lightweight cotton that still protects limbs from what ouches us. And with the stretchy waistband, it’s very comfy to get into those awkward positions to nab a weed or prune without stepping on anyone else. Best investment I ever made.  I looked at the women’s versions, but they were too frou frou, and cost more (go figure).  And they didn’t have pockets.  Any gardener knows you need pockets.

My latest purchase:  a soil thermometer.  This was on my Christmas list, and I dropped lots of hints, but Santa was busy.  So I got one myself.  I’m still figuring this out, but I took the temperature in the cat cove with sun hitting at 9 a.m. and it was  80º. 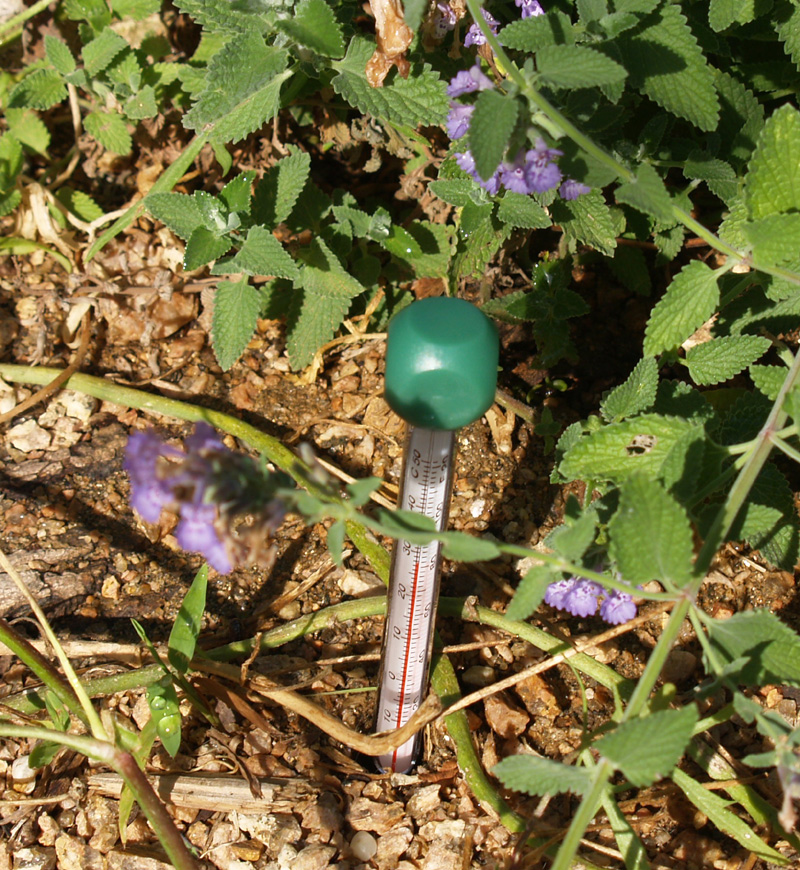 According to the chart that came with it, pumpkins like soil temp to be 90, so that explains why Chris Corby told us to plant our pumpkin seeds in June!  Online, you can pick from your choice of soil temp charts.  For years, I’ve known that soil too cold or too hot is a germinating factor, but now I can know for sure. Fascinating!

Both Chris and the Dwyers would have known the answer right away for a viewer’s question this week about why her squash shriveled up at 3-4″. I had to investigate, but learned (and confirmed with our Extension agent) that it was a lack of pollination.

On the heels of that, I’d noticed that this year I don’t have that many bees or wasps.  There are some, for sure, but not the cavalcade usually in my garden. MSS from Zanthan Gardens told me that she’s seen fewer wasps, too.  What’s your situation?

But I have more ants than ever.  Not fire ants, but these guys still bite if I step on their turf.  Certainly, I’m not killing them since they are free soil activators, and I don’t have a flea problem at all (maybe a connection?). If I get in trouble with the ants, I rely on the aloe vera plants on the patio to deal with it.

Right on target, the first tree I planted long ago is dazzling us from the patio or from the den window inside. 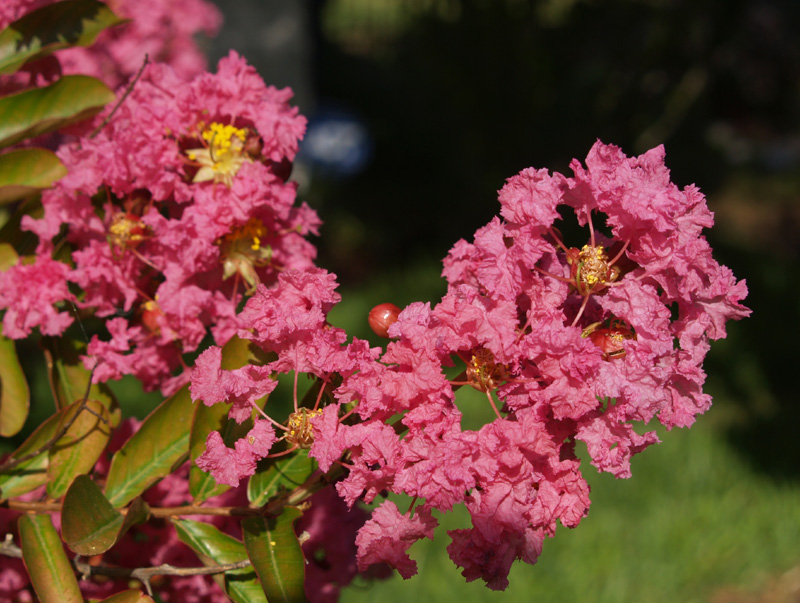 My botanical horizons have widened since I first adorned my crape myrtle with a circle of dahlias, a short-lived newbie experiment that had me looking locally for garden information! 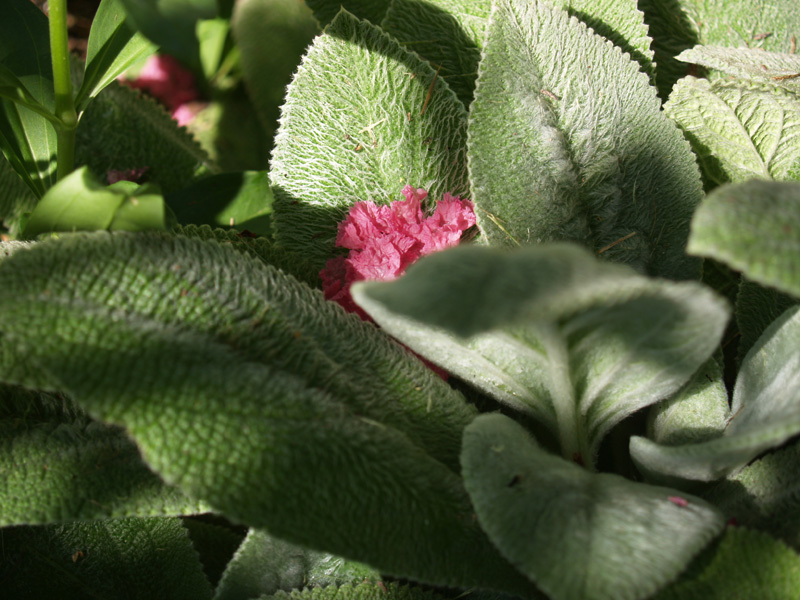 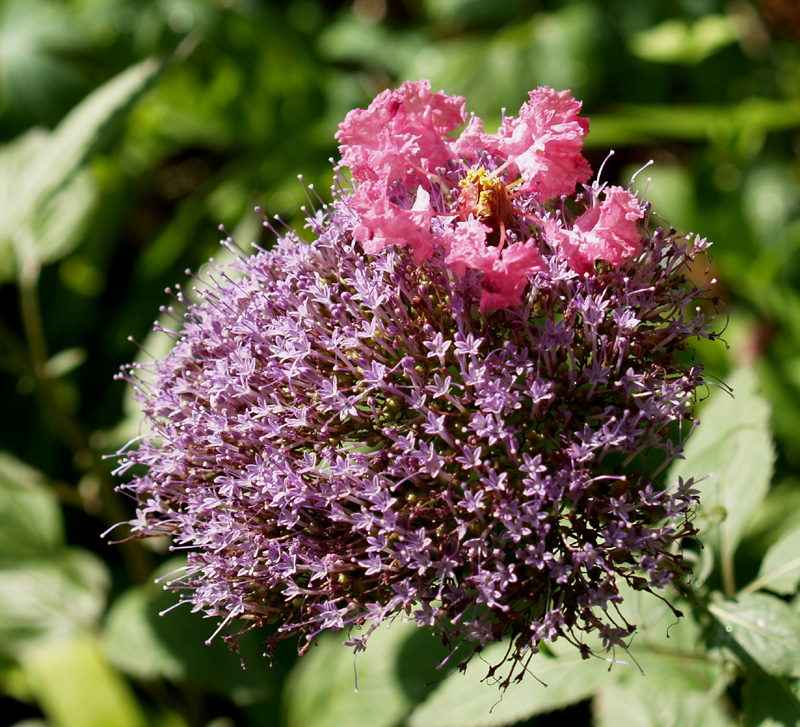 Many times I’ve questioned my idea to plant a crape myrtle and a mountain laurel in the same large island bed.  But now they’ve created a sort of “room” between the front and back parts of the backyard.  This year, they formed the perfect “window” to our new birdbath. With some gentle pruning now and then, we can maintain this focus.  Is that elegant or what? 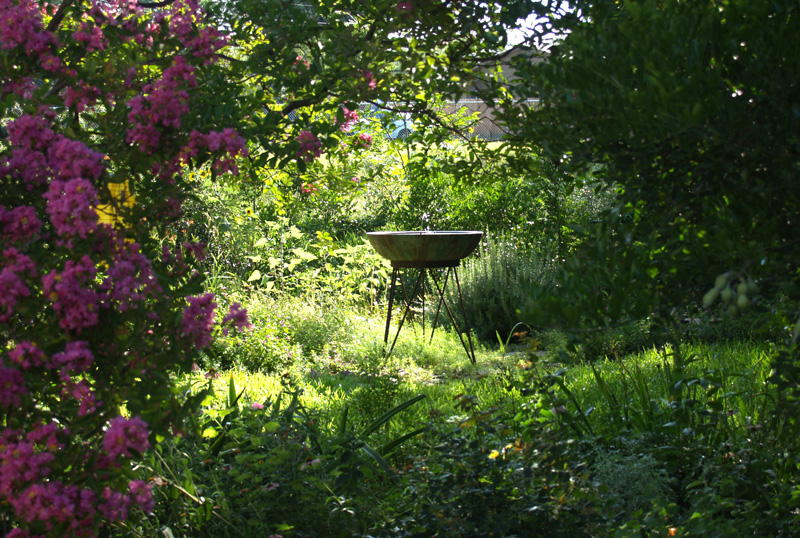 Here’s the birdbath with a few customers, though in my haste to catch this, I’m rather off skew with the camera. 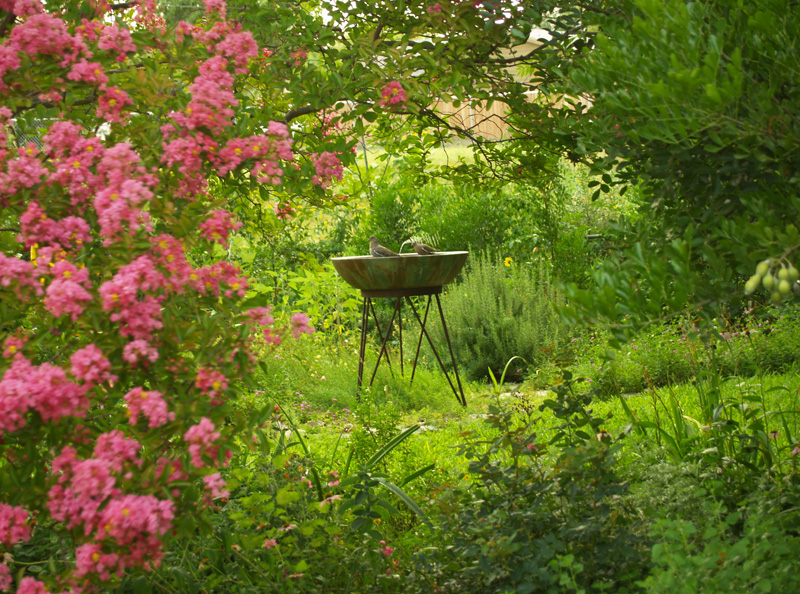 A few minutes later, the sun hit the solar panel for a really great waterfall, but by then, my jammies and I were busy at work.