My garden’s in transition. Spring flowers have faded or are waning. Summer’s perennials are taking a deep breath for the job ahead to fill blank spaces. Last Sunday, I cleaned up like crazy. Aside from the overgrown mess, this helps fend off snails. They were partying down on all the dense spring growth, including the lambs ears. I hated to cut the spiderworts before they seeded, but at this point, their moisture-laden mess invites snail happy hour. Now that I’ve “closed down the joint,” the snails moved on.

I collected the last of the poppy seeds and pulled out the stalks. A few weeks ago, their hats were about to pop. 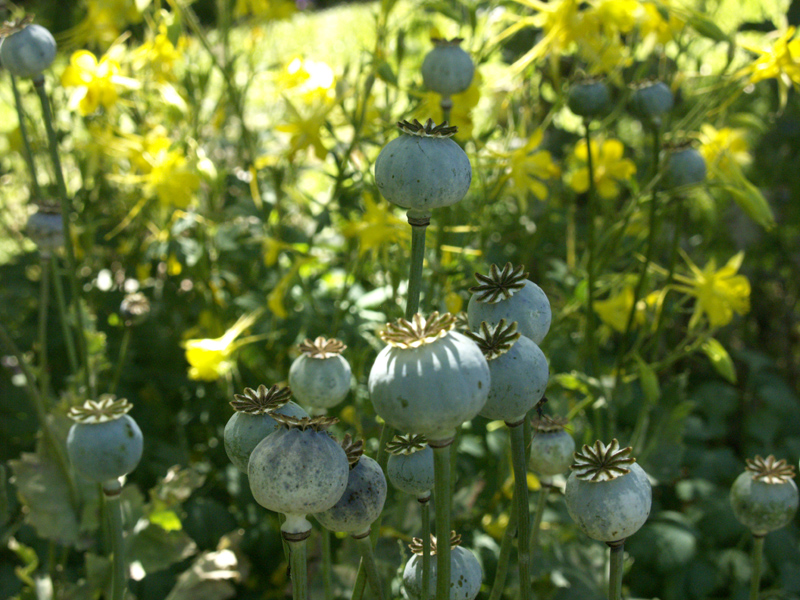 Everyday, I watch the hats. When they pop their tops, I cut them off and sprinkle them into containers to dry in the house before I seal them in bags. Like a kid at Halloween, I rejoice at the loot!  But boy, am I glad I don’t do this for a living. By the way, MSS at Zanthan Gardens has poppies that bloom later to extend the poppy season, so I may give those a try next year.

Also, I deadheaded roses, cutting down past a few leaf stems to a leaf axil in the right direction. Bunnies Harvey & Gaby “composted” them.  If I were a good person, I’d also give the roses some fertilizer. But since I’m not, they’re on their own. New Dawn is used to a thrifty diet. 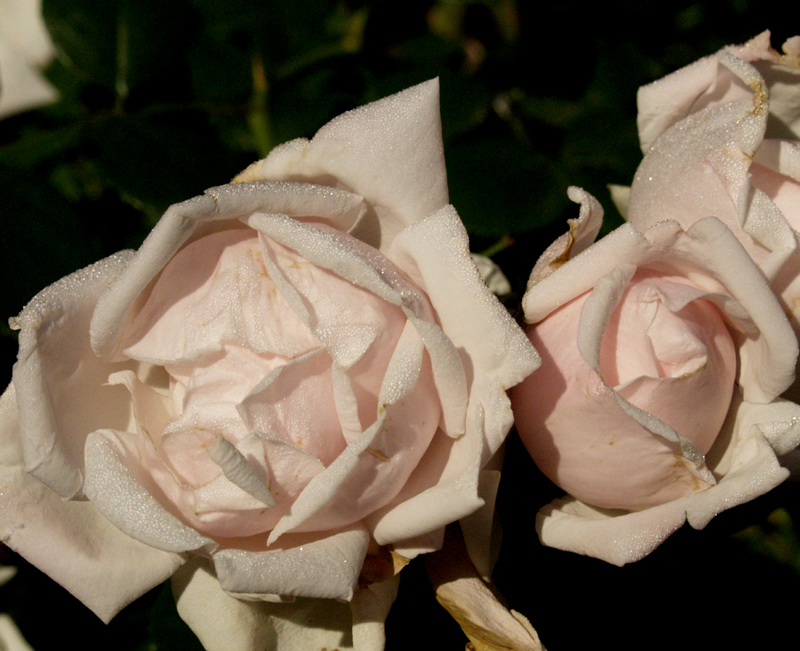 So is Buff Beauty. 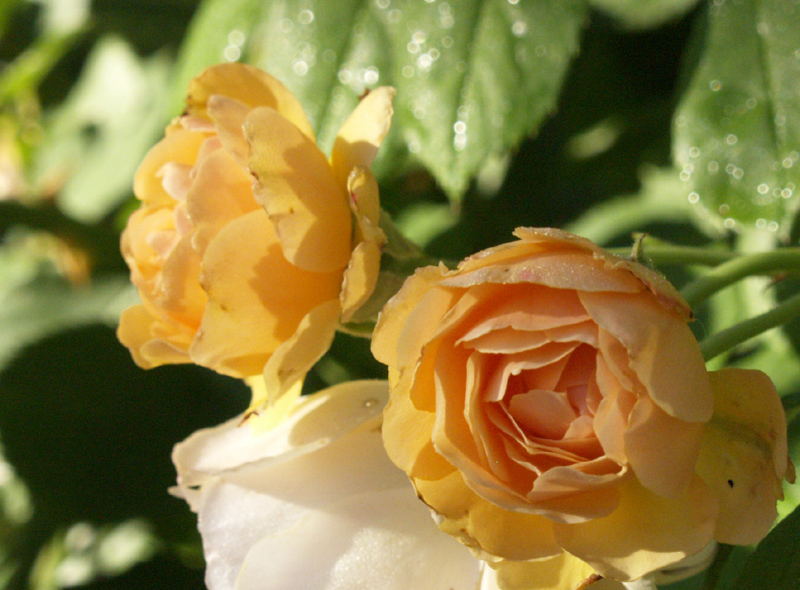 Here’s the new ‘Senorita Rosalita’ cleome in its pot next to Buff Beauty on the cat cove trellis. I gave it a bangs trim, too. Actually, anything in my path got a haircut. Or pulled out. 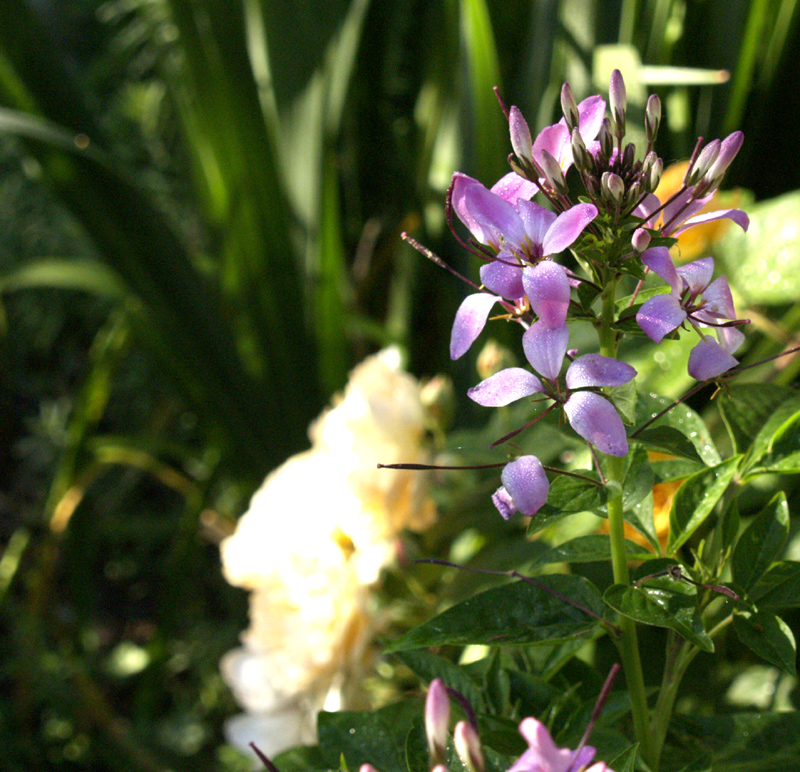 In the cat cove, Pelargonium sidoides is still busy with blackfoot daisy and winecups. 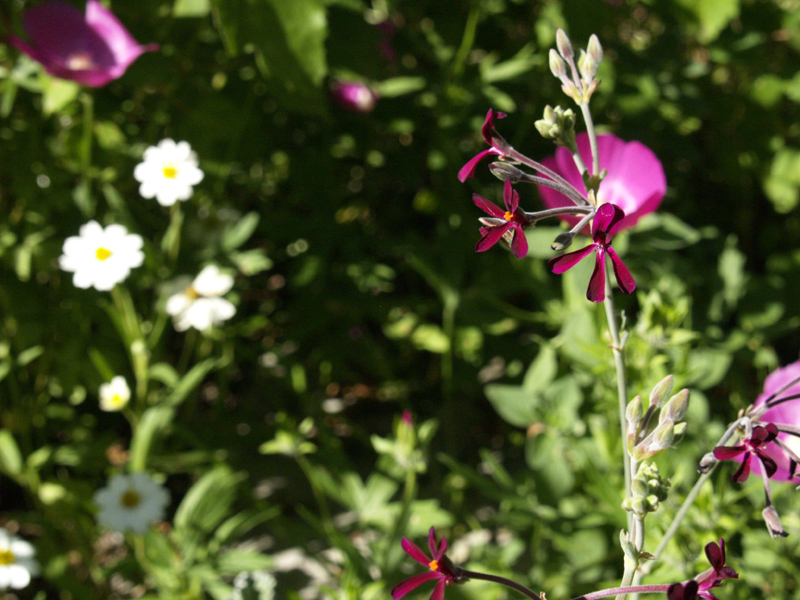 Every spring, I get questions about mountain laurels not blooming. There are many reasons, which Daphne explained a few weeks ago on CTG, but one is pruning off their flower buds. Now that they’ve leafed out, they’re putting out next year’s flowers. Go see how many flowers you’ll have next year! 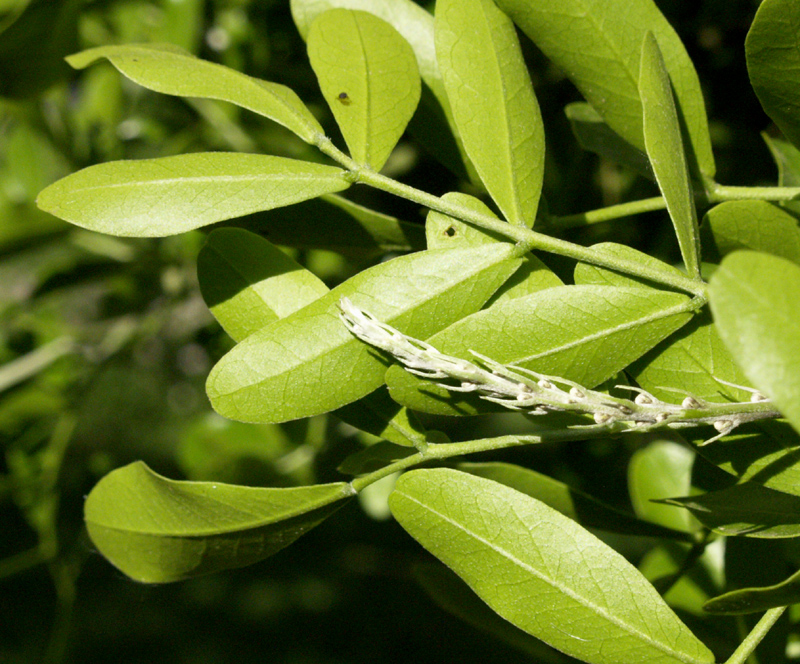 Unless caterpillars chomp everything to pieces. Like me, they’re on a rampage to cut back everything in their path. The insects are exploding, the good with the “bad.” Fend off the caterpillars you don’t want with Bacillus thuringiensis (Bt) but don’t go crazy and lose your butterfly larvae too. I’m leaving my bolting parsley to attract swallowtail butterflies to lay their eggs. Bolting lettuce attracts aphids for the ladybugs. I can deal with that mess for a few weeks more.

This week on CTG, we venture to new heights with green roofs. Designer Casey Boyter and architect Lauren Woodward Stanley meet with Tom to illustrate a few designs and explain the spiritual and ecological benefits of green roofs. 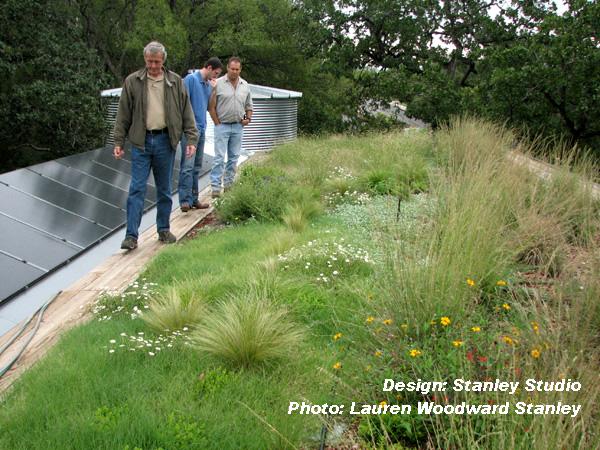 With partner Dylan Seigler, their GRoWERS team wants to bring even pocket-sized green roofs to everyone. 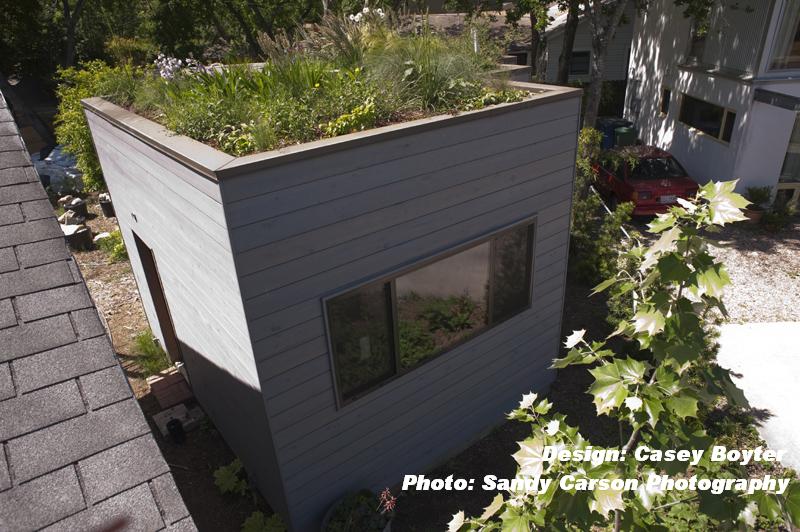 On our video tour, visit Casey’s personal “bunkhouse” green roof in Central Austin. Get the story behind her venture into this new technology and how she grows cascading roses, butterfly plants, and even a “lawn” on a tiny space with a big perspective. 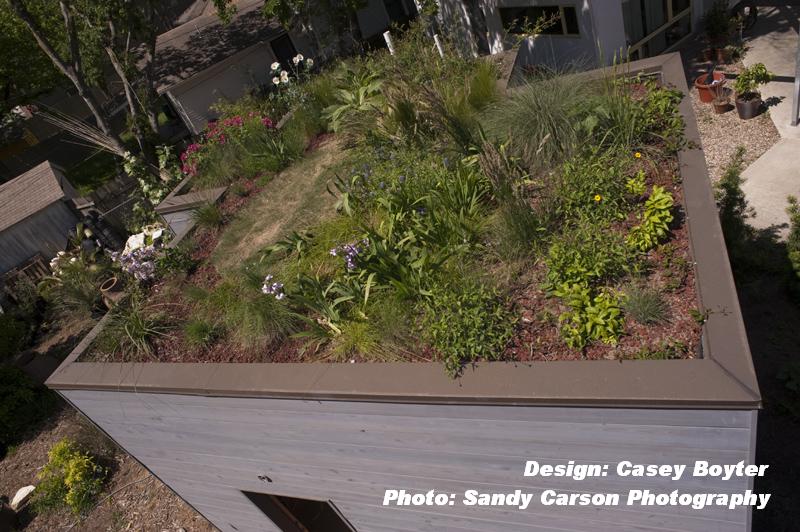 I thank professional photographer Sandy Carson for both his pictures and the music from his band Iglomat!

Have you ever wondered why some zinnias work great and others just fall over in summer? Trisha has the answer this week, with great fungal-free, no-deadheading choices.

Daphne explains why some bulbs don’t naturalize for us. If you have some special favorites you really want to store over summer, she explains how. Get CTG’s various lists for naturalizing bulbs on our website. By the way, one of my cleanup chores was cutting back browned foliage. As you know, you want to wait until the foliage is brown, so that the naturalizing bulbs can collect fuel for next year. Wait too long, and you’ve got a snail party!

Viewer question I got this week: Why are my squash fruits falling off? And, my tomatoes are tall and healthy but not much fruit. My response was lack of pollination on the squash and too much nitrogen on the tomatoes. But, I’m no expert, so I sent it to the boss, Jo Dwyer from Angel Valley Organic Farm, who added to my dilettante knowledge.

That woman doesn’t sleep!  She returned the answer in seconds on a Sunday night, no less!  “Yes, you’re right about the squash not getting pollinated.  If he has male flowers — the ones on stems, rather than the ones that turn into fruit, obviously — he can take a Q-tip and put a little pollen from the male into the female.  (kind of X-rated, but it works!)  And I think you’re right about the tomatoes, too.  See if he’s been spraying them with fish or anything like that.  Tomatoes don’t necessarily need bees or other insects to pollinate, but they do need some kind of movement like a breeze or a wiggle or two from the gardener every day.  Each flower has both male and female properties.  The pollen just needs a little push to travel down the flower to the female part. Now, if he’s not getting many flowers, though, that’s too much nitrogen for sure.”

All you vegetable gardeners (Jo & I deplore the term “veggie”), can get great tips on Jo’s weekly blog from the farm.