Before and After Garden Makeovers

How do you design a garden from scratch? Or maybe you just want to pep up your current look? Get designer Diana Kirby’s tips from the ground up. On tour, see how Molly O’Halloran and David Brearley turned a parking lot yard into a garden, including the best ever chicken coop. Daphne Richards explains the difference in soil, compost, and mulch. Her pick of the week is Salvia greggii ‘Cardinal Velvet’. John Dromgoole selects cover crops to improve your vegetable garden soil.

Building a home for chickens wasn’t their first project when Molly O’Halloran and David Brearley renovated their 1915 house and garden on Austin’s east side. Now, they serve up fresh eggs with their organic vegetables. Plus, their vegetables thrive with compost enriched by chicken poop and the chickens’ help in turning it.

How do you design a garden from scratch? Or maybe you just want to pep up your current look? Get designer Diana Kirby’s tips from the ground up.

What’s the difference between soil, compost, and mulch?

Soil is the substrate that your plants grow in. Soil is made up of varying amounts of sand, silt and clay. And if you’ve got a good balance of these three mineral elements your soil is called loam. Too much clay leads to sticky, heavy soil that inhibits plant growth. And too much sand leads to leeching and a lack of water holding capacity. Silt is somewhere in between clay and sand as far as size, texture and effect on overall soil structure.

If you’re lucky, your soil also has a good amount of organic matter and a healthy microbial population. But you might be surprised to learn that a soil with only 5% organic matter is pretty fabulous, and it’s hard to get even that much into your soil.

Compost is pretty much all organic matter. Commercial compost includes many natural ingredients. At home, we make compost by combining leaves, grass clippings, and kitchen scraps. Ideally, we’ll add a little garden soil, too. Your soil contains the necessary microbes to break down the organic matter in your compost pile to a size and texture that’s beneficial in your soil.

Compost helps to increase the water holding capacity of your soil without overdoing it. It helps to break up heavy clay soils and helps sandy soils hold a bit more water. It builds the structure of your soil giving it just the right balance of air and water.
Compost also feeds the microbial population, helping to keep them around and contributing to your overall soil health.

Mulch is ground up plant parts that are not composted and are generally larger pieces than compost. Pruned tree limbs that have been processed with a chipper shredder, bark pieces, and even processing byproducts such as pecan shells can be used as mulch. Mulch is generally all carbon as opposed to compost which contains both carbon and nitrogen. Mulching your soil around plants retains soil moisture, tempers soil temperature and helps repel weeds.

There are also inorganic mulches, like gravel or even stones.

Compost may also be used as a mulch, since the primary purpose of mulch is to protect the soil from the environment by covering it. Both compost and mulch eventually break down due to the weather and the action of microbes, which is why it should be replenished at least yearly. 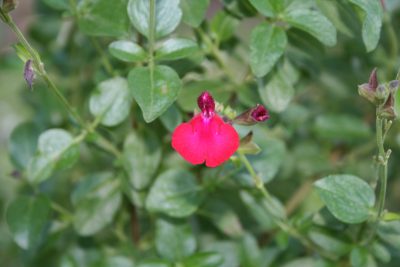 This cultivar of Salvia greggi behaves much the same as the species, but the flowers have a more intensely velvety look to them. The flower's a little fuzzier which gives it a different texture and a deeper color. This evergreen woody perennial grows to about 3' tall and wide. It can take the full sun, but I've found that mine performs a bit better with some protection from the intensity of afternoon rays. It can grow in some shade as long as it gets sun part of the day. It's not picky about soil but does like good drainage. In heavy clay soil, do amend with compost to improve drainage. Although it is a low water-use plant, it will definitely perform a little better if you water it once a week during the heat of the summer. It flowers from spring right on through fall, with maybe a little break at the peak of summer heat. But once temperatures cool just a bit, the sun becomes less intense, and we get just a little bit of fall rain, 'Cardinal Velvet' comes roaring back to life. It is listed as hardy to zone 8, so if we have a particularly harsh winter, you might lose this one if you can't protect it. All cultivars of Salvia greggii benefit from harsh pruning in late January and early February to fend off woodiness and encourage lush new growth. Prune lighting again in May and in late August to encourage new flowers that bloom on new wood. 'Cardinal Velvet' looks great planted alone in an open space in your garden, but also looks fabulous when planted in masses, or as a short border around planting beds.