Sizzle up your summer garden with Jeff Yarbrough from Emerald Garden Nursery and Watergardens.

On tour, Robin Howard Moore notes the trends that changed her garden and former Howard’s Nursery.

Daphne explains how to mulch when rainfall is sparse. Her pick of the week is hardy, tropical Rangoon Creeper that brings on the hummingbirds and butterflies. Trisha Shirey puts those garden weeds to work as natural fertilizers.

Since Howard’s Nursery closed in 2006, Robin Howard Moore has more time to spend in her own garden and on her design business, Robin’s Garden Design.  Growing up in the family nursery taught her a lot about growing locally and mixing compatible plants for standout attention. At home, she spins artistic whimsy into the mix to travel the various journeys in her sun and shade garden. Get her hands-on tips for success and insider info about how garden trends changed her designs and the industry.

Jeff Yarbrough from Emerald Garden Nursery and Watergardens helps you sizzle up your summer garden.

How should I mulch when light rain doesn’t make it down to the plant roots?

Thanks to Pete Vera for this great question! He writes:  “I’ve always heard that mulch helps keep moisture in the ground.  But, after a 1/2″ rainfall event last year, I was shocked to see that the mulch also prevented the rainfall from penetrating the ground.  The soil was absolutely dry after 1/2″ of rain.  What should I do this year?”

Well, Pete, your observation is correct.  Because of the extremely hot, dry weather last year, organic mulch got, and stayed, really dry, creating a sort of crust on top of the soil.  So when it rained, the mulch soaked up some of the water, but since it was so dry, much of the water may have run off to surrounding areas because it couldn’t soak in fast enough.

The mulch was still doing its job though:  protecting the soil from the elements and insulating it to keep it cooler, and keep moisture from evaporating so quickly.

So, back to your question of what to do:  you should still use mulch, only instead of using the standard recommendation of two to three inches, maybe cut back to only one, so the rain-blocking crust doesn’t get so thick.  During extremely hot, dry times, the lack of moisture also keeps the mulch from breaking down at the soil surface and becoming soil-building organic matter for the future.

In my garden, I usually just add a one-inch layer of new mulch to the top of last year’s.  But this year, I went ahead and removed most of the old mulch and put it in my compost pile before I added new mulch.  Last year’s dry, crusty mulch would eventually break down, with enough moisture, but you don’t want to make the layer even thicker by just adding mulch on top.

Another helpful thing to do this year would be to add drip irrigation or soaker hoses to your beds under the mulch, if possible.  Adding moisture underneath the mulch will ensure that your plants get water directly where they need it.

And if you don’t have a compost pile for your old mulch, put it out in paper bags by the curb with your other yard waste, so that the city can turn it into compost. 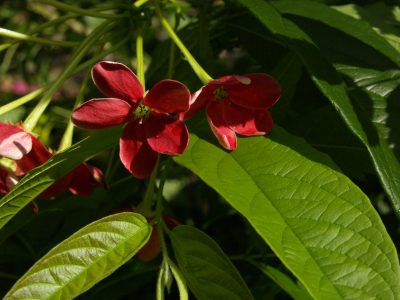 This tropical vine is actually very drought and root hardy for us. We'd noticed a gorgeous specimen of Rangoon Creeper on our visits to The Great Outdoors, so we dropped by to talk with general manager Merrideth Jiles about it. Merrideth says their Rangoon creeper thrives in full sun, with very little water and absolutely no fertilizer. It's obvious from the trunk size that their Rangoon Creeper has survived quite a few years of harsh Central Texas weather, including extended drought and unusually cold winters. It does need the support of a fence or trellis, so be sure to give it a spot where you can provide plenty of height for future growth. Merrideth reports that their Rangoon creeper does freeze back if temperatures drop into the 20's, but bounces back with no problems. The gorgeous flowers, which seem to drip from the plant at every possible spot on the plant, resemble those of plumeria, but aren't quite as large. They attract hummingbirds and butterflies, too! Gardener Robin Howard Moore says that the fragrance reminds her of bubble bath! Rangoon Creeper is deer resistant. Robin grows hers in part shade. In San Antonio. Ragna Hersey said that her plant only gets a few hours of mid-day sun, but it blooms prolifically, starting in mid-summer. So, the more sun, the more flowers, but it is adaptable. It did take about 3 years for hers to bloom but that's not unusual for many vines. Ragna waters this drought-tough plant about once a week in the hottest times of summer. It doesn't have any insect or disease problems.