Author Cherie Colburn tells some Bloomin’ Tales of Texas Wildflowers for the whole family! On tour, meet a Texas transplant who learned a new garden vocabulary. Daphne Richards illustrates some insects you’ll find in the compost pile and how to scare out the fire ants. John Dromgoole demonstrates how to layer the compost pile for productivity and to keep off the flies.

Kathleen Lorsbach learned a new plant vocabulary when she and her family moved to Texas. In Minnesota, she knew just what to do. Now, drought replaced snowfall. Kathleen fell in love with plants she’d never grown before, designing a waterwise destination garden that reflects her new roots.

I’ve got worms and fire ants in the compost pile. What should I do?

If you’re an active composter, you’ll definitely have insect larvae in your pile, and that’s a good thing. These creatures are helping the microbes to break down the food waste in your pile and turn it into rich compost. Large, off-white grubs like this picture are very commonly found in compost piles, and people often mistake them for the same grub that damages our lawns.

But the grubs in your pile are from a different species of insect, not the June beetle larvae that eat the roots of your turf grass and other plants. These are the grubs of the rhinoceros beetle. They help decompose your compost. The very large adults don’t eat much at all.

You might also find black soldier fly larvae in your compost pile, which are also good.
The insect species that are attracted to lay eggs in your pile will be influenced by what you put in it. If you have more kitchen scraps and food waste, you’ll likely have more insect larvae. If you’re only composting yard waste, you may not see as many creepy crawlies.

But fire ants are another matter. Fire ants are actually building their mounds in the nice, soft organic matter of your compost pile. Although they’re doing some aeration and technically aren’t hurting anything in the pile, you most likely still don’t want them living there, since they’ll see the pile as theirs, not yours. If you have a mound of fire ants in your pile, it indicates that you need to turn and moisten the pile more often.

If you’re regularly turning the pile, the ants will have no time to build a home. In the awful summer of 2011, I didn’t turn my pile as much as I should have and I came out one day to discover that a very large colony of fire ants had moved in. I got stung a few times when turning it and it took a few turns to get the ants to move away, but they eventually did. So there’s no need to use any chemical fire ant treatments in this situation. 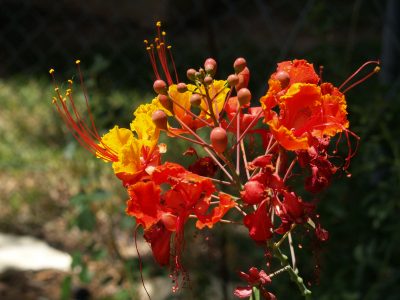 There are two very common species of Caesalpinia in the nursery trade: pulcherrima and gillesii, and both are quite beautiful. Caesalpinia pulcherrima is most commonly known as Pride of Barbados or Red Bird of Paradise. It has orange-yellow flowers and is a little bushier than Caesalpinia gillesii, which is most commonly known as Yellow Bird of Paradise, because it has all yellow flowers. Both plants love the heat, need full sun, and prefer very well-drained soil. These plants will bloom all summer long with very little supplemental irrigation, so be careful not to overwater them. Both plants may freeze to the ground in winter, but not always. For many gardeners, the Yellow Bird of Paradise doesn't freeze to the ground in winter. If it does, just cut it back, and it will return in spring. Pride of Barbados, the orange flowered one (Red Bird of Paradise) is more frost tender, and does freeze to the ground in our winters more often than not. Usually it will return in spring but younger plants may be slower to emerge. Both plants can get up to about 8 feet tall, but Pride of Barbados is generally a little shorter and bushier, mostly due to the fact that it freezes to the ground most years. And both plants get about 4 to 6 feet wide, so give them plenty of room. Both plants attract hummingbirds and butterflies and are considered to be deer resistant.

John Dromgoole demonstrates how to layer the compost pile for productivity and to keep off the flies.