Drought buster perennials are a natural for Janet Rademacher from Mountain States Wholesale Nursery in Arizona. Find out why to pick some of the latest selections at your local nursery. On tour in San Antonio, Heather and Brett Ginsburg’s young family loves the wildlife since they dumped the lawn for a xeric-style party. Daphne shows how to propagate rosemary and grow wildlife favorite bottlebrush. Trisha puckers up with homegrown calamondin and kumquats.

When gardener/blogger Heather and Brett Ginsburg dumped their lawn and boring shrubs for a xeric-style party, it didn’t only mean replacing the grasses with a bunch of rocks and cactus. To wow their kids with wildlife discovery, Heather transformed their new “old house yard.”  Yes, they have some structural succulents, but they’re players against lots of dramatic drought-tough perennial color for bees, butterflies, and birds.  Along with herbs (and vegetables to come), they dumped grass in favor of pet chickens who return the love with lots of fresh eggs.

Drought buster perennials are a natural for Janet Rademacher from Mountain States Wholesale Nursery in Arizona. Find out why to pick some of the latest selections at your local nursery.

How can I propagate rosemary?

Our Facebook friend Cheryl noted that her prostrate rosemary has rooted several new plants. So, she asks, can she propagate cuttings, too? She’d seen online that you can root it in water.

Here’s how to propagate your rosemary:

It’s one of the easiest plants to propagate, especially from soft wood cuttings.  In the spring, once stems start to elongate, take tip cuttings about 6″ long. Be sure to cut a new stem, which will be green and growing, and not woody yet.

Remove the leaves on the lower inch of the cuttings by simply rubbing them against the grain. Then stick the cuttings in a small container of potting soil, up to the point where the lowest leaves are just on the surface, not below the soil level.

Keep the potting soil moist, but not too wet, and the cuttings should root in about a month.  If you pull slightly on the cuttings and they move, no roots have been formed yet. But if you encounter resistance, roots are starting to grow and the process is going smoothly.

After a couple more weeks you can dump the container out and separate the cuttings, then plant them wherever you want.

For most plants, rooting in soil is much better than rooting in water.  Roots that are developed in water function much differently than roots formed in soil. So if you want to eventually transfer your cutting to soil, it’s better to root it in soil to start with.

If rooted in water, once the cuttings are moved to soil, entirely new roots will need to be formed, since the water-grown roots will not function properly in their new environment. 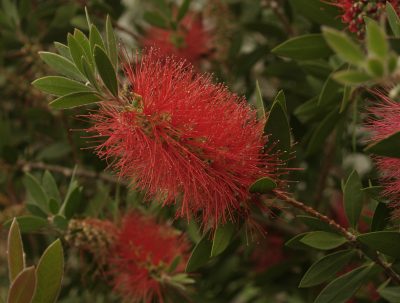 There are lots of different species, varieties, and cultivars of bottlebrush, an Australian native, so do a little research on the differences before you buy. The two most important distinguishing characteristics are size and hardiness, since dwarf cultivars and more cold tolerant species are becoming more widely available. Bottlebrush is a small, usually shrubby tree, normally getting only 10 to 15 feet tall. Bees absolutely love the fuzzy red flowers and the tree will be buzzing with life all summer long. This tree is notoriously frost sensitive, usually being completely killed if temperatures get into the 20s. But I've also seen bottlebrush taken out by our extreme Texas heat during abnormally hot, dry summers. One way to protect bottlebrush from the heat is to plant it in a sheltered spot, with maybe only 6 to 8 hours of summer sun. And the north side of a landscape should be avoided, since that's the coldest spot. Local garden blogger Dr. Robin Mayfield shares her story of her beloved specimen. After the harsh summer of 2010, which was followed by an abnormally cold winter, her majestic 12 foot tree succumbed to the stress of such extreme weather, but she loved the tree so much, she's decided to plant again this year, in a different spot in her yard. Bottlebrush is evergreen, so it's a good choice for screening out unsightly views. But since it's wispy, it allows light to filter through, rather than creating a solid hedge-type feel, giving privacy without overwhelming an area. Robin reports that her trees were very drought tolerant once they were established, and were very happy in her unamended heavy clay soil. So, final analysis: lovely tree that brings on the bees for months in warm weather. But, it needs good drainage, sunlight but not searing, and we can lose them in cold winters.

Trisha puckers up with homegrown calamondin and kumquats.