Good Taste And Health With Herbs

Meet Homegrown publisher and author Judy Barrett for the inside scoop on herbs, heirlooms, and why she went organic. Get her book list here. On tour, Earth Camp fifth-graders at the Becker Elementary Green Classroom teach wise lessons on watershed protection. Daphne shows how to collect shower water to return to the garden. Spice up the warm weather beds with her pick of the week, Black Pearl pepper. Get Trisha Shirey’s tips for cleaning and pruning gardening tools to make spring clean-up a breeze.

From the mouths of babes, get wise lessons on watershed protection from Earth Camp fifth-graders at the Becker Elementary Green Classroom. See how garden chemicals make their way to our drinking water, which plants provide the best filtering, and how to make a rain garden to keep water right where we need it.

Meet Homegrown publisher and author Judy Barrett for the inside scoop on herbs, heirlooms, and why she went organic. Get her book list here.

Can I use soapy shower or kitchen water in the garden?

We can harvest water outside, but what about the gallons that go down the drain INSIDE? Put it to work!

Many people capture the cold water from the sink or the shower while they’re waiting for it to heat up, which is great. But you can also capture water WHILE you shower. It’s especially easy if you live in a newer home, since a lot of new construction tends to have stand-alone showers, separate from the bath tub. You just need a few buckets and you can capture several gallons of water every time you shower. This may not sound like much, but in our continued drought, a few gallons go a long way.

In my shower, I use two round buckets, but the real key is the flat-sided bucket that I put between them. I can press the flat bucket up against the back of the shower and catch all of the water that misses me and bounces off the wall. I catch about 4 gallons per shower, which I normally use on my oak trees in the front yard. Even though these trees are dormant during the winter, as are a lot our plants, they still need a little water.

So, what about soap in the shower? Well, most of the water that gets into my buckets has totally missed me, and so doesn’t have any soap in it. But even if the water WAS soapy, it wouldn’t hurt anything. The concentration of soap would not be that high, and soaps these days no longer contain phosphates, which used to be a problem.

Some gardeners use a plastic basin in the kitchen sink to pour that water into the garden, too. That’s perfectly fine, but if you have a lot of food residue in the water, you might want to pour it on your compost pile instead. 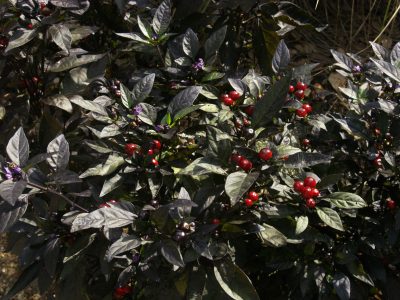 This pepper is a real beauty in the summer garden. It's a lovely little annual that can actually live much longer, if you keep it in a container and bring it indoors before temperatures drop into the 40's. But it's also easily replaced each year, and has a sculptural, almost shrubby growth habit. Black Pearl is a deep, glossy black, which is truly unique, and it makes a striking addition to any landscape. Pair it with silvery plants for a real show-stopper! The fruits do indeed look like black pearls, but as they ripen, they turn a surprisingly bright red. It gets about 2 feet tall and wide and thrives in full, blazing sun but can take some shade. Good drainage is important, so if you have heavy clay soil, be sure to add lots of compost and don't overwater. Although the fruit is edible, Black Pearl is an ornamental species, and most people don't use the fruit for cooking. But if you do, be forewarned, they are very hot: over 30,000 Scoville units! A better use of the fruit might be to let it ripen on the plant, then harvest it and let it dry completely before removing the seeds and saving them to plant next year. Plant the seeds indoors in February or March, for planting outdoors in late April or early May, once the night-time temperatures are reliably in the 60's. Black Pearl will start to flower in early summer and will be covered in fruit all the way through fall.

How to Sharpen Tools

Get Trisha Shirey’s tips for cleaning and pruning gardening tools to make spring clean-up a breeze.