Meet some durable groundcovers for shade and sun with Michelle Pfluger from Green ‘n Growing. On tour, visit Elayne Lansford’s Bottle World, her tribute to triumph over life-threatening illness and the power of healing through gardening. Daphne Richards explains why to firm the soil around new plants. Her pick of the week is native shrub agarita. Merrideth Jiles from The Great Outdoors shows off a few plants that stand up to drought and hard freeze.

Elayne Lansford’s Bottle World healing garden is a tribute to triumph over life-threatening illness and the power of healing through gardening. Reframing her reality by giving new life to old objects helped her when husband John Villanacci faced a random disease and lung transplant, soon after she recovered from breast cancer. It was a twist for Elayne, a psychologist who helps clients every day. In her refuge of sanctuary and peace, she worked out some of her sorrow and anger through hands-on activity and creation.

Meet some durable groundcovers for shade and sun with Michelle Pfluger from Green ‘n Growing.

Why do we firm the soil around new plantings?

And if firming the soil is good, why are we not supposed to walk through our garden beds?

When digging a new hole for a plant, we’re basically destroying a soil structure in that area, so we want to put it back as close as possible to the way it was. Tilled soil has increased fluffiness and larger pore space, which increases the space for air in the soil, which is not necessarily a bad thing especially for a new planting. But those larger air-filled pores are too large to hold on to water, which could very well be the kiss of death for a new transplant in a very short time.

That’s one reason why you should water new transplants every day if not twice a day, for a while. This is about more than just the plant’s lack of roots; it’s about the soil settling and the pore space decreasing over time.

Once the soil has settled back to the way it was before you dug your hole, it’ll begin to get back to the natural structure and water holding capacity that it had due to its natural texture, which is dictated by the amount of sand, silt and clay and organic matter that makes it up.

If you’ve heard of no till farming, you’re familiar with this concept. Disturbing the soil structure as little as possible, except obviously in the planting hole, is best for overall soil structure and overall health.

But there’s also soil compaction to think about. If the soil’s walked on extensively or driven on in the case of construction with heavy equipment, the pore spaces are squeezed together, leaving no space for air and eventually, no space for water either.

Obviously a plant’s roots need water. They also need oxygen to breathe and be able to take up the water and life-giving nutrients that are in the soil. Compacted soil also becomes very hard, making it almost impossible for roots to push out into it. And when roots can’t grow, the rest of the plant’s growth is also impeded.

Lack of rain, especially if you’re unable to irrigate, also leads to soil compaction. Like a sponge when it dries out, your soil shrinks in and out, decreasing pore space and making it very hard to re-wet without squeezing it. And I don’t have to tell you that you can’t squeeze your soil.

During the extended heat and drought of 2011, Central Texas soils became very compacted, adding yet another stressor to plants, especially in natural areas where there was no way to irrigate them and alleviate the problem. So soil compaction should be avoided at all costs. 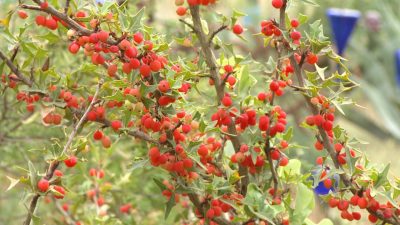 Also known as Berberis trifoliata, this rounded shrub has leathery, spiky, holly-like foliage, though the leaves are more gray-green than the deep green of holly. It's evergreen and has no problem surviving our winters or our summers here in Central Texas. This plant is as tough as it looks and although it thrives in the full sun, it also does just fine in a bit of afternoon shade. Do give it good drainage. It can get a little monstrous, up to 6' tall and wide, and even bigger if rain is plentiful, so give it plenty of room to spread. The delicate yellow flowers appear in late winter and cover the plant from February until as late as April, depending on how cold our winter is and how late our last frost arrives. Flowers are followed by bright red berries from about May through July, which are a great source of food for any wildlife and birds in the area. You can also harvest the berries and use them to make jelly. Birds love the berries but it is deer resistant.

Merrideth Jiles from The Great Outdoors shows off a few plants that stand up to drought and hard freeze.