See how to catch the rain in barrels, cisterns, and berms with environmental consultant Dick Peterson. On tour, take a soothing walk through the Umlauf Sculpture Garden & Museum where two art forms unite. Daphne explains why a young tree won’t grow. Pick of the Week is Pam’s Pink turk’s cap. Trisha shows how to organically fertilize container plants.

In this museum, you can tramp along trails fragrant with mulch and leaves and flowers. The sound of birds and waterfalls accompany your contemplation of the sculptures that capture timeless human emotions. Best of all, at the Umlauf Sculpture Garden & Museum, set on two acres above Zilker Park, you can run your hands over the sculptures for a sensory connection to Charles Umlauf’s passion.

See how to catch the rain in barrels, cisterns, and berms with environmental consultant Dick Peterson.

My tree just isn’t growing. Why not?

When a tree looks good but just isn’t growing, most people assume that they just aren’t watering the tree enough, so they ramp up the irrigation. But a lack of water is likely not the issue, so more water won’t help.

A tree that is not getting enough water will NOT look great, it will show signs of stress, such as yellow or brown leaves that dry up and drop off; limb die-back; and perhaps even borer damage and other secondary pest problems. And with last year’s extreme heat and drought, followed by more hot temperatures and lack of rain this year, we do have a lot of trees across Central Texas that are showing drought-stress symptoms. Trees that aren’t getting enough water also don’t grow, but they look stressed, not healthy.

So the first thing that comes to mind in this situation, since the tree LOOKS good, is girdling roots. If a tree was grown in a container for too long before it was purchased, the roots will hit the sides of the container and begin to grow in a circle. And if this pattern isn’t corrected before planting, the roots will continue to grow in a circle and will eventually choke the plant to death. I say eventually, because the entire process may take many years. And while the tree is slowly dying, it will look pretty good, it just won’t grow, because the roots are all tangled up and woody and unable to take up any water or nutrients. So no matter how much you water the tree, it won’t grow.

This is most noticeable when two trees have been planted at the same time, given the same amount of water and fertilizer, and treated the same in every way, but one looks the same today as it did several years ago, when it was first planted.

Other root issues may also lead to stunting. If you live in the Hill Country, with rocky limestone and virtually no soil, it could be that the planting hole you dug is simply a basin and the tree’s roots can’t penetrate into the rock surrounding them. The bottom line is, if the roots can’t grow, the tree won’t grow.

Unfortunately, the only way to confirm girdling and other root issues is to dig up the tree and inspect the roots, so most people choose to just leave the tree alone and live with its small stature. The bad news is, it may take a decade or more, but eventually, if the roots can’t grow, the tree will die. 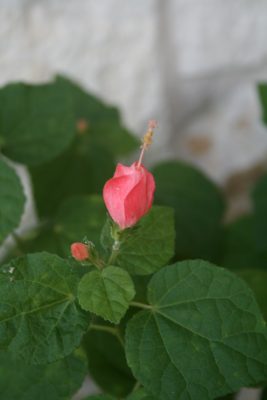 This wonderful perennial is a cross between another, more tropical turk's cap cultivar, 'Big Momma' and our lovely native variety, drummondii. Pam's Pink has a similar growth habit to our red flowering native, and also prefers a similar habitat.