In a meeting of science and soul, Peckerwood Garden’s John G. Fairey added new plants to our garden vocabulary.

My heartleaf skullcap disappeared in the heat. Will it return?

Thanks to Chris Busse for this great question!

And yes, it will! Heartleaf skullcap (Scutellariaovata) is one of the relatively few plants that go dormant in the summer, instead of the winter, thus defying our in grained view of how plants behave in response to seasonal changes. We’re quite accustomed to plants going dormant in the winter, but usually around here, if something dies back in the SUMMER, it actually IS dead.

Since plants can’t just get up and walk away when the weather gets bad, they have to adopt other strategies to deal with the changing seasons. Plants that are native to our temperate climatic zone usually respond to COOLER temperatures and SHORTER days by going to sleep to avoid potentially harmful clashes with the cold of winter.

But certain plants may also respond to the stress of extreme heat and drought,and the LONG days of INTENSE sunlightin the same manner-by hunkering down for a little nap until the situation improves.

Heartleaf skullcap does just fine here in our Central Texas winters, but doesn’t care so much for our hot, dry summers. Even in “normal” summers, with a few DAYS, rather than a few MONTHS of temperatures over a hundred degrees, heartleaf skullcap more often than not avoids heat stress by dying back to the ground in summer.

In fall, it re-sprouts from underground stems. In fact, with October’s cooler temperatures, Chris has seen her rebound.

Consider planting this native groundcover under winter dormant perennials. The silvery fuzzy leaves and later flowers will fill in the blank spaces. When it goes underground for summer, your hot-weather perennials will be back to get the spotlight. 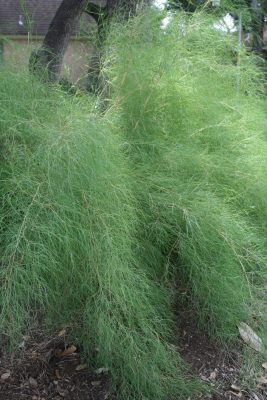 Bamboo muhly is one of my absolute favorite ornamental grasses. It has a wonderfully soft texture and feathery leaves that sway peacefully in the gentlest of breezes. The stems do resemble actual bamboo, and there is quite an Asian quality to this plant. Bamboo muhly gets 3-5' tall and 3-4' wide, so make sure to give it plenty of space to spread out. It looks great planted in a massed row for architectural interest, or used as a living screen. And in the right container, bamboo muhlycan be a fabulous show-stopper in an entryway or on a patio. This plant has beautiful straw-colored seed heads in the fall and winter and is usually evergreen. With our intense sun and heat, bamboo muhly will do much better if planted in spots with bright filtered light to light shade. Be sure to water it regularly until established, then cut back on irrigation. As with all plants that have underground stems or crowns, bamboo muhly may rot if kept too wet. It's listed as hardy to zone 7 and we're zone 8, but we can lose them in extreme, lengthy cold. New plants are most susceptible. Mulch well and protect if you can. BUT, if they brown up, do wait to dig them up! When temperatures warm up, they'll send out new shoots from roots that stayed warm underground. Prune out the brown foliage just before new growth starts to emerge in the spring. Bamboo muhly is not invasive but the clumps do get larger, so if it gets too large for your space, you may dig it up and divide it into several pieces, returning a smaller plant to the original space.