Christine and Bill Reid from Reid’s Nursery select plants to screen a view or hide a fence. On tour, visit a San Antonio Spanish courtyard. Daphne Richards explains the difference between a cultivar and variety. Trisha Shirey demonstrates how to plant spring bulbs.

In San Antonio, when Claire Golden restored an historic 1900s house, she renovated the gardens in her preservation mission. An acequia running through the Spanish courtyard connects many garden levels to the interior rooms.

Christine and Bill Reid from Reid’s Nursery select plants to screen a view or hide a fence.

What’s the difference between a cultivar and a variety?

Varieties are plants with slightly different, and usually desirable characteristics from other plants in its same species. Varieties may have more attractive flowers, a dwarfed stature, a trailing instead of upright growth habit, tastier fruit, etc.

Varieties of the same plant are naturally occurring and are usually found in geographically distinct regions from each other, but hybridize easily if brought into contact. For a variety, you will see “var” on the plant tag.

An example with yellow columbine:

But these days, you can also see plant tags with the initials “c.v.” That indicates that the plant is a cultivar, which means that humans were involved in its creation.

In the early history of man’s relationship with plants, many cultivars arose from the simple act of human cultivation. But these days, the creation of cultivars is big business, with the race to cross-breed species and varieties to come up with the latest and greatest new thing a thriving industry.

And just like other man-made items, companies want to protect their investment, so cultivars are patented, meaning that no other company can reproduce or sell that plant until the patent has expired. You may see “Plant propagation prohibited” on some tags. Gardeners and insects may propagate the plants, but growers cannot.

An example with Salvia coccina:

The Knock Out(R) rose, seen by some as the easiest, most carefree rose on the market, is an example of a trademarked cultivar, or actually, series of cultivars, since now there are Knock Out roses with many different flower colors than the original bright cherry red. 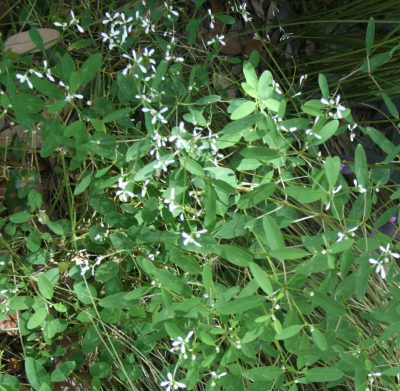 This euphorbia is another example of a trademarked cultivar, introduced by Proven Winners. This delicate looking little plant is actually quite tough and usually deer resistant. 'Diamond Frost' blooms reliably with small white flowers from late spring until the first freeze. It's a wonderful low-growing plant (12 -18? tall and wide) to brighten up those partly shady areas. It doesn't need pruning and insects are not a problem. Generally good soil and some water are all it needs. Plant in groups for a standout show of continual flowers on very tidy plants. But this is where we must adapt the plant tag to grueling Central Texas sun. Although the tag says 'Full sun to part shade,' for us 'Diamond Frost' should be planted in bright, filtered light, or light shade. Receiving morning sun should also be okay. If planted in shade, 'Diamond Frost' requires little supplemental irrigation, but do be careful not to let it dry out. In normal years, it's pretty drought tough. Its plant tag lists it as an annual except in zones 10 - 11. But in mulched, protected niches near the house with other plants to warm it, it may be fine in our winters. Generally, it is an annual that we can plant again after the last frost for many months of blooms.