Let’s beat the heat with summertime flower power and Marcus Young’s picks from Bloomers in Elgin.

On tour, visit Cuts of Color flower farm for the freshest bouquets in town. Daphne answers: why did roses turn a different color? Her pick of the week is drought tough crinum lily, a stand-out summer bloomer to attract wildlife. Trisha compares edible rosemary varieties, from super tall to groundcovers and container plants.

Every day, Rita Anders packages bundles of freshly cut flowers at her Cuts of Color flower farm in Weimar, Texas. From seed to market, she grows joyous bouquets for your vase, just a few hours after picking. She’ll even grow a bride’s color scheme and style, from traditional to succulents. See how she does it, tips for arranging, preserving your flowers, and why slow flowers, locally grown, are your best picks.

Let’s beat the heat with summertime flower power and Marcus Young’s picks from Bloomers in Elgin.

Why did my rose change color?

Thanks to Jen Rhodes, who has some interesting things going on with her roses. They all seem to be changing! About 15 years ago, Jen planted several different roses, including Madame Isaac Pereire, which has deep pink flowers. But recently, she’s noticed that its flowers are a deep merlot color, and that the leaves are also completely different than they used to be.

Could this be some sort of cross-pollination from her nearby Knock Out Roses? Well Jen, there’s no cross-pollination going on here, what’s happening is much simpler, although less obvious at first. But to answer your question, we first need to talk about how roses are developed and propagated. Rose breeders are some of the most prolific in the nursery universe, coming up with seemingly hundreds of new roses each season. And in the early days, all of the fabulous new roses released each year were grafted onto the roots of a completely different rose. This was usually to keep size in check, or to convey disease resistance, or some other nice benefit that the fabulous new cultivar did not possess. And the most commonly used rootstock in the entire rose breeding industry was a rose called ‘Dr. Huey’, which just happens to have deep merlot flowers. Jen’s rose changing issue is actually quite a common one. After many years in the garden, and heavy pruning, most roses will begin to produce new canes from the roots, not just from the trunk system. Since the roots are below the graft union, any new canes that come from the roots will have the qualities and characteristics of the rootstock, not the plant you purchased and that has been growing in your garden for years. If you want to get your plant back to the rose you knew it to be, you’ll have to prune all of the canes that emerge from the roots every year. But if the entire top growth has died or if it’s been pruned below the graft union, there will be no way to get back to the original rose that you had. Nowadays, more and more breeders are offering roses as own-root, which means that they’re not grafted onto Dr. Huey, or any other rootstock. And the leaves and flowers of own-root roses will always remain the same as the plant that you purchased. 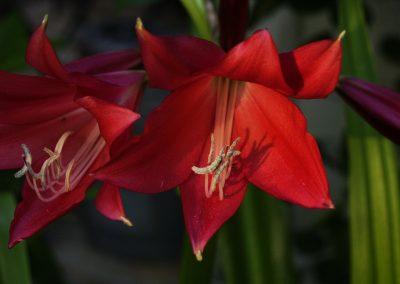 There are many crinums to pick for summertime color and strong foliage. From our delicate white native swamp lilies, to the deep reds, soft pinks and other gorgeous colors available in various hybrid cultivars and heirlooms, if you've got a shady spot that's still pretty bright, Crinums might be a good choice for your garden. As with most bulbs, these perennials are dormant in the winter, with new leaves and flowers emerging each spring. Crinums prefer moist, rich soil, high in organic matter, so it's good to add a little compost as mulch each season, or when you divide the plants every few years. As with most bulbs, crinums rot if they stay too wet, so be careful that your rich, organic soil isn't holding too much water. Actually, these are very drought tough plants that have been around for years, so if you don't want often, they will be fine. Crinums perform best in areas of very bright, filtered shade, or with morning sun only. The harsh afternoon rays can fry them. Very popular in heirloom southern gardens, Crinum lilies are some of the toughest plants around, making them a great choice for busy gardeners without much time to pamper their plants. They look and perform best when crowded, so plant them in small masses, tucked into small corners of shady beds. You can also divide them to move to other spots or share with friends.