Susan Orlean, staff writer for The New Yorker and author of The Orchid Thief, chronicles her journalistic exploration into the fascinating world of orchids. On tour, visit Monica Gaylord’s orchid greenhouse retreat right at home. Daphne Richards identifies slime mold. Pick of the week: native winecup. Trisha Shirey shows how to put your weeds to use in a natural fertilizer.

Thanks to her orchid greenhouse, Monica Gaylord doesn’t have to travel far to experience the beauty, fragrance and complexity of orchids. She just steps outside her bedroom doors to retreat to global destinations without packing one bag. Meet her yourself and learn more about orchids at the Heart o’ Texas Orchid Society.

Susan Orlean, staff writer for The New Yorker and author of The Orchid Thief, chronicles her journalistic exploration into the fascinating world of orchids.

What is this growing in my garden? Is it harmful?

Thanks to David McNiel for this great question! He found this odd growth in mulched pathways and garden beds. Is it harmful and what should he do?

It is slime mold. With all the rain we’ve had this spring 2012, and with temperatures so warm, this substance has been showing up in many gardens. In fact, my friend Mike, who works for the Austin Fire Department, recently told me that he responded to a call from a school to check on a possible “hazardous material” found on the children’s playground. What did it turn out to be? Slime mold.

Slime molds are unique creatures that don’t fit into any categories that we’re familiar with. Although they have fungus-like characteristics, they aren’t fungi. They exist in nature as a “blob” that is often bright yellow, and even sometimes red.

Their preferred food source?Bacteria. They occur when there is high relative humidity and relatively warm temperatures: exactly the conditions that we had in spring 2012.

They are not harmful to humans or animals. And they’ll run their course fairly quickly, so there’s no need to do anything about them, unless you can’t stand to look at them. If that’s the case, simply remove and toss them in the garbage or compost pile, or just break them up with a rake or a strong jet of water.

If slime mold returns, even when we aren’t getting rain, it would be because the area is being over-irrigated. 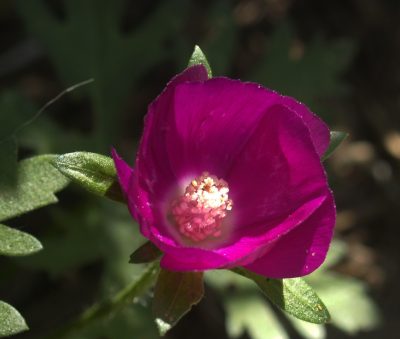 Winecup (Callirhoe involucrata) is a native groundcover perennial that blooms in spring. They form a sprawling evergreen mat to explode with vivid purple flowers in March or April. You can also find varieties with white flowers. They bloom for weeks, opening in the morning and closing at night. Extend their blooming time by deadheading spent flowers. Light: Sun to part shade. Soil: They grow in many soil types, as long as it is well-drained. They like shallow, gravelly areas, even preferring the small cracks between landscape pavers to a richly amended garden bed. In heavier soils, loosen it with decomposed granite or compost. Don't mulch them heavily with wood mulch. A little is fine as long as the area dries out. Size: groundcover to 6-12" tall, can spread to 3' wide. Water: Need very little. Overwatering can cause the fungal disease, rust. When to plant: Plant seeds in October or November. Transplants can go in any time, though not in summer's heat. The perfect time is fall or spring. They do re-seed in good conditions. Pruning: Deadhead flowers to extend blooming time (unless you want seeds!). Trim back dead growth in late summer to encourage a flush of growth in the fall. Winecup should also be pruned back to its base in late winter, before the new spring growth emerges.