Transition from winter vegetables to summer crops with tips from Paula and Glenn Foore from Springdale Farm. On tour, visit Sunshine Community Gardens, where people and plants flavor an urban space with organic food. Daphne Richards analyzes a loquat tree in distress. Trisha Shirey features kale and its tasty recipes.

From its inception in the 1970s, Sunshine Community Gardens has put food on many a table while connecting urban folk to the root of its origins. Its mission is more important now than ever: a public space where people can come together to grow organic food.

Transition from winter vegetables to summer crops with tips from Paula and Glenn Foore from Springdale Farm.

What’s wrong with my loquats?

Thank you to Rachel Jackson for this great question! Here’s what happened: last summer one of them started wilting and then several trunks died while other parts of it lived. There is bark damage on the dead limbs, but the living trunk has put out blossoms.

It’s almost undoubtedly cold injury. Loquat is a relatively cold hardy sub-tropical, but last year the warm temperatures during the end of January caused a loss of hardiness in all plants. The cold front that came through on the first of February caused a sudden drop in temperatures. We went from 74 degrees to 11 degrees in about 22 hours. This caused freeze injury on almost everything. We even lost grapevines and peach trees. It is not surprising that loquats were injured even if they were in a protected location. The trunk injury and the description of how the plants collapsed, along with trunk weeping, are consistent with how we see plants respond. Here’s what to do: Keep the plants well watered, but not saturated, over the winter. The drought last winter greatly exacerbated the problem with cold injury. Trees can indeed repair themselves, but don’t be surprised if limbs continue to collapse and bark sloughs off of the trunk. Just keep the plants in as good of health as possible, remove dead wood, and hope for the best. 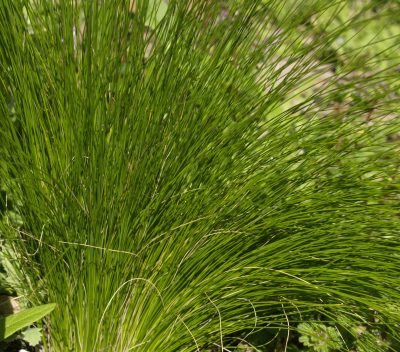 This feathery, small clumping grass is perfect for the waterwise garden! Plant Mexican feather grass in well-drained soil, near other xeric plants. Give it sun or part shade. It is considered deer resistant. Plant in fall or spring. Water to establish it. After that, water sparingly, during the driest of times. Excessive irrigation or flooding rain, especially in heavy soils, will rot its roots. This is a waterwise plant! Mexican feather grass grows to about 18 inches to two feet tall and a foot or two wide. So, it's a smaller grass that works well to texturize other plants in your low-water garden. They're great planted in masses, to add soft texture that sways with every breeze. It produces soft blonde seed stalks in late spring through summer. This produces lots of seeds, and soon you could have many more! You may find this quality endearing, especially if you have some empty spaces you want to fill in. But if you find this annoying, simply dig up the seedlings when they're small and share with your friends or in another part of your garden. Like other ornamental grasses, prune them during dormancy in February. Cut them near the base to encourage new growth.