What Do Insects See?

What do bees and butterflies really see in our plants? Andrea DeLong-Amaya from the Lady Bird Johnson Wildflower Center explores the runway pollinator patterns and colors that are invisible to us. On tour in San Antonio, Heather and Brett Ginsburg dumped the lawn for wildlife wonder for their young family. Daphne answers: Why did native prairie verbena rot? Plant of the week is drought defiant perennial wildlife lover Mexican bush sage (Salvia leucantha). Trisha Shirey digs up those long-rooted tree seedlings we don’t want with magical new tools.

When gardener/blogger Heather and Brett Ginsburg dumped their lawn and boring shrubs for a xeric- style party, it didn’t mean a bunch of rocks and cactus. To wow their kids with wildlife discovery, Heather transformed their new “old house yard.” Yes, they have some structural succulents, but they’re players against lots of dramatic drought-tough perennial color for bees, butterflies, and birds. Along with herbs (and vegetables to come), they dumped grass in favor of pet chickens who return the love with lots of fresh eggs.

What Do Insects See?

What do bees and butterflies really see in our plants? Andrea DeLong-Amaya from the Lady Bird Johnson Wildflower Center explores the runway pollinator patterns and colors that are invisible to us.

Why is my native verbena dying in the middle?

Thanks to Christine Sills for her picture and great question!

All was going well with her native prairie verbena—then it started to decline. What’s going on?

Christine added about 4 inches of top soil to her mostly clay yard.  She did install a French drain in this

low spot in the garden to disperse heavy rainfall.

The plants grew all spring and summer and were covered in blooms in April and May. Then, in the

span of one week the plants suddenly and quickly turned brown, and then gray; dying from the center

outward. All of the blooms shriveled up and quickly fell off.

Last year, she pruned all the dead growth as the prairie verbena was dying, and that plant has barely

come back this year.

Here’s the deal: we rely on drought tolerant plants to conserve resources. Then, we get rain bombs that

rot these drought tough plants that dislike too much water.

rain event in our area. Even though she installed a French drain, she’s still on clay soil and it’s the lowest,

water-collecting spot in the yard.  So, that clay soil is going to stay too wet for many low-water plants.

How to solve it:

You can still have this beautiful native plant in your yard, with just a few adjustments. First, avoid placing

low-water plants in low spots in your yard. But if you do, you can build berms to raise them up.  Be sure

to use loose, well-draining, non-clay soil, so that the plant’s roots don’t stay too wet.

Also, avoid mixing this soil with compost or other organic matter. Most drought-tolerant plants prefer

nutrient-poor soils. Soils that hold nutrients, in even small amounts, are problematic for plants that

prefer a dry, loose planting area. The plant doesn’t use the nutrients, so they serve as a food source for

Combine this with wet soil, and you have a double whammy: too much water, which rots the roots,

and plenty of food for potential pathogens. So ultimately, your prairie verbena likely succumbed to

some sort of crown rot or other disease. This happens almost every year in our demonstration garden

with a similarly beautiful native plant, winecups. Like you, we prune it back to the crown and hope

that it comes back the next year, which it usually does. If yours doesn’t, consider replanting in another 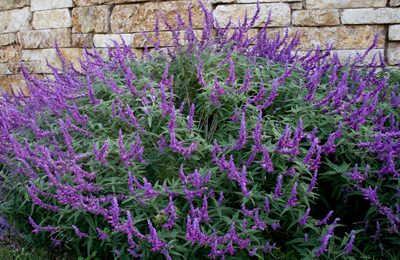 This drought-hardy perennial has soft green foliage with a slight silvery tint. In fall, it produces beautiful cascades of velvety purple flowers that attract butterflies and other beneficial wildlife. It's a great plant for kids to touch, too! It can get to be around 4' tall. It can freeze back in winter. Cut it back in February and new growth will come up. It prefers full sun but can accept light shade, though it may not be as full and lush. It's drought tolerant, but it does need adequate water during the hot summers like we had last year. It does take heaver soil than some salvias, so is not so prone to rot in those heavy soils.