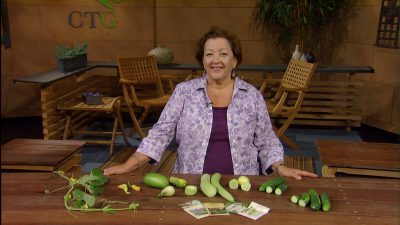 Doesn’t seem to matter how carefully I plan the garden. Every year it seems like I have a surplus of some vegetable, and this year was the year of the cucumber. I only planted three varieties and two plants of each of those three varieties, but seems like I was picking buckets, and buckets of cucumbers every week. And I did cucumber soup, and salads, but there’s only so many cucumbers you can eat before you have just way too many, and my friend Javier suggested that I make aguas frescas. It was such a great idea that pretty soon I didn’t have too many cucumbers because I was using them for this wonderful drink. In Mexico they’re often sold by street vendors, and they are a mixture of many different things. Sometimes you’ll find aguas frescas made with cucumbers, sometimes with melons, cantaloupes, and they’re very, very simple to make, and they use a lot of produce in the making. So with aguas frescas and cucumbers, you don’t really have to peel the cucumber. Now if you’re using cucumbers from your own garden. These are some of the cucumbers that I did really well with, the regular green-type cucumbers. Market More and Diva are two really good varieties for this area, but I also grow a lot of these lemon cucumbers, and they’re really best small. This very large one is getting to be a little bit too mature to eat in salads, but it still makes a wonderful agua fresca. The seeds inside are very large at that point, but you don’t have to peel them again, if your cucumbers are homegrown, and not waxed to make this. And so what you’ll do is just cut your cucumbers up kind of chunky, it doesn’t really have to be a very small dice or anything like that, and you’ll put them in a blender. And I think a blender is really better than a food processor for this. Put them in a blender, cover them over with good quality water, and just blend, I first start with a low speed of grate, and then progressively blend until they’re fairly, thoroughly blended. Then you’ll take that blender and strain through a fairly fine strainer. You want a strainer that is going to catch most of the pulp, and put that in, and you don’t want to press it through the strainer, just let it strain out very gradually. Now many times in aguas frescas other things are added. You can add some fresh limes, some fresh lemon. Sometimes they’ll chop up some fresh mint along with the cucumber, and that’s really refreshing. You can also add sweetener if you like. Now I think for the cucumber you really don’t need the sweetener, but you can add agave nectar, rice syrup, sugar, whatever sweetener you like. And another thing that really works well with aguas frescas is sometimes you’ll have melons, cantaloupes, watermelon that are really too sweet, and not really all that great of flavor, so you could make a melon or watermelon aguas fresca, add a little sweetener to it, maybe even a little mint, and it makes a really nice beverage, and you get to take advantage of using that produce. So just strain this through your strainer, you can give it a little bit of a shake to get most of the water out. The contents go into your compost pile, and then keep it in the refrigerator for up to a day or two. It’s really refreshing to come back in from the garden after a tough morning working, and have a wonderful ice-cold glass of cucumber aguas fresca. And if you want a little adult beverage, add a little vodka or tequila to it as well. I hope you’ll enjoy aguas frescas from your garden.