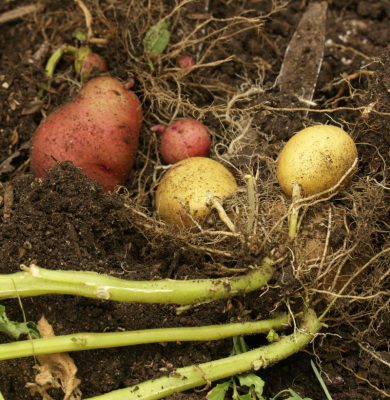 Plant prep:
You want to buy your certified seed potatoes several weeks before it’s time to plant. Avoid grocery store potatoes since they may have been treated with sprouting inhibitors. Generally we plant potatoes around mid-February. I like to plant root crops around a new moon. As a rule of thumb, one pound of seed potatoes will produce 4-5 pounds of potatoes.

You want to buy your certified seed potatoes well in advance because you want the potatoes to sprout a bit before you plant them. That will reduce the number of days to harvest. If you don’t have time to pre-sprout, they will still grow, but I’m usually in a hurry, so I like to have the potatoes pre-sprouted!

To pre-spout them: lay them in a single layer in a cardboard tray or plastic plant tray lined with newspaper. Spread them in a single layer and do not let them touch each other. Just like potatoes sprout in the kitchen when they’re in a sunny and warm area, that’s what we’re trying to duplicate here for the sprouting. It’s also called chitting.

Put the potatoes where they’re going to be around 60 or 70 percent, which might be outside on your porch or patio. It’s important that they don’t freeze during this stage because that could damage the sprouts, so bring them inside if temperatures drop. Also, don’t let them get wet.

Eventually, you’ll see that the eyes produce long sprouts. If they’re 3/4  to 1 inch long, that’s perfect. You want to cut large potatoes, so that every potato you plant is at least the size of a golf ball or a little bit larger. So, you can buy just very small potatoes and plant them whole without cutting. If you end up with larger ones, cut them up, with a sprout on each piece. Let them dry out a bit and callous over. Then, dust them with dusting sulfur (not soil sulfur). Tap it on and knock off the excess. Let that dry another day or so and then it’s ready to plant.

Those new sprouts are very easy to break off, so be careful when you handle them.

Planting:
In a sunny spot, dig furrows about 6-8 inches wide and about 6-8 inches deep. Put your seed potatoes in, spacing them to about 10 inches apart. If they’re crowded, you’ll get fewer and smaller potatoes. Cover them over with soil. A few weeks later, they’ll have sprouted 3-4″ above the soil. At that time, add more soil over them.

You can also plant them in containers. Use something like a bushel basket or large container, stock tank, old trashcan or whiskey barrel. Be sure to punch drainage holes if the container doesn’t have them. Fill it about halfway with very good well-drained potting soil. Add your potatoes, barely cover them, and then as they grow and sprout, add more soil on top.

In 90 – 120 days, the tops will die back and yellow. Then it’s time to harvest. Be care as you unearth the soil to find them! You can harvest small potatoes before, but once those tops die back, gently dig and you’ll have lots of wonderful potatoes to enjoy in your kitchen.