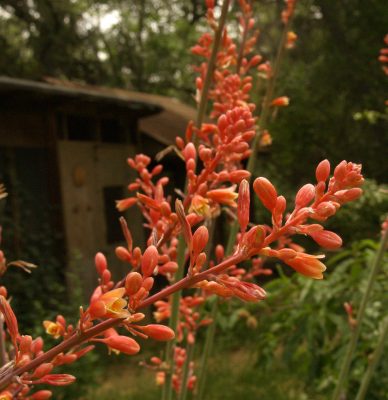 Unlike its common name, Red Yucca is not really a yucca, it’s in the lily family.

And most of them really aren’t even red. It gets 2-3 feet tall and about as wide, with a flowering spike that can add an additional 2 to 3 feet in height. It flowers from spring through summer, producing one set of blooms that last for quite a long time.

Each flower bud will produce a seed pod containing many flat, black seeds. If you want to harvest the seed, wait until the pods dry completely on the plant, then cut off the entire stalk and break the pods open to collect the seeds.

Red yucca prefers full sun, but can take part shade. It’s very drought-tough, surviving on rainfall alone, even in the harshest of times. Since it survives so well on so little water, you might think it would struggle with heavy soils and over-watering, like other desert species, but it really doesn’t. I’ve seen it be just as happy in clay soils as in sandy ones. Red yucca is used to good effect as an accent plant, among areas of decomposed granite and rock mulch. It is evergreen, with long, narrow leaf blades and an arching habit.

When you bring them home, they are likely to be quite small, but don’t be fooled. Give them at least 2 feet on each side to spread out. And be careful if planting near Bermuda grass. If grass or other weeds get up under the plant and amongst those narrow leaves, it will be impossible to pull out without completely digging the plant up or working from the root area, which would not be good for the plant.

Hummingbirds love the towering flower stalks, which range from salmon, the most common, to yellow, to red. New cultivars show up now and then, like the recent Brakelights yucca.

Deer also love the flowers, but they usually tend to avoid the plant itself.