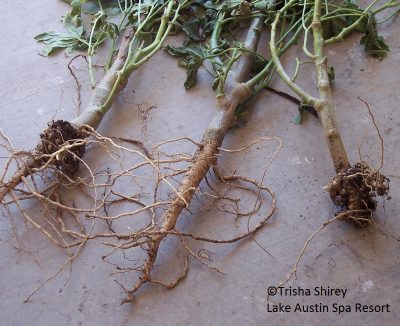 These parasitic worms infest plant roots and rob them of water and nutrients. They are microscopic worms, but the damage to roots is very apparent. They are more common in sandy soils and can be introduced when soil is added to the garden, from soil on tools and garden implements or from infected plants.

The nematodes distort the roots with root knot galls, very visible when you pull up an infected plant.

These are not nitrogen nodules which are found on the roots of beans and other legumes. Nitrogen nodules can be easily pulled off the plant roots; root knots from nematodes are not removable. These colonies blockade the normal root plumbing, forming stunted, rounded growths. Plants wilt quickly and may look chlorotic or yellowed due to their malnourished state. A soil test can determine how severe the problem is and identify the specific type of nematode that may be present in the soil.

Certain crops are more affected by nematodes than others. Tomatoes, pumpkins and okra may be impossible to grow in severe nematode infestations. Peppers, cucumbers, beets, watermelons and eggplants and even roses are affected to a lesser degree. They rarely kill woody plants like trees and shrubs, but can weaken them and make them more susceptible to other problems. Nematodes rarely affect our cool season crops other than late carrots as they are not active in cool soil, below 64 degrees.

They may never be completely eradicated but there are measures to control them so that crops can be successful.

Plants Not Affected by Nematodes