It’s my bet that gardeners are neck and neck with first-time parents or pet owners for running down camera batteries. But nabbing pictures like this can be hard. 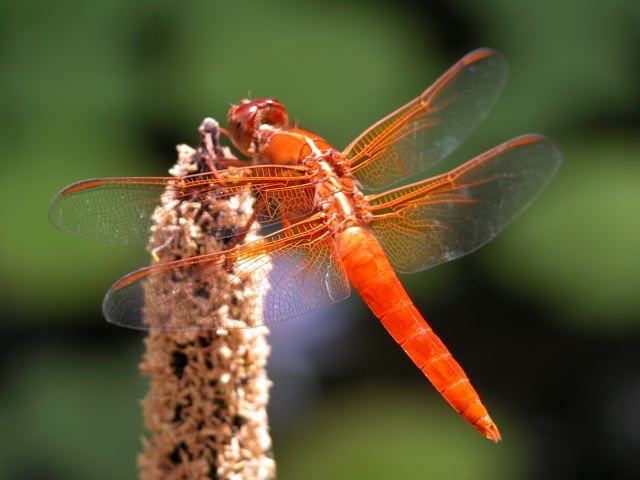 Expert photographer Sam Myers will show you how he did it, and much more, at a free workshop presented by the Travis County Master Gardeners on October 22 from 7-9 p.m.  Registration is limited to 40 people, and you must register in advance. SO, after you read my words of wisdom, check out their site and then email gisathccs@aol.com to confirm your spot. Get the eye-popping preview this week on CTG, when Tom meets with Joann Neal, who volunteered to organize this premiere event after visiting Austin’s tour a few years ago. 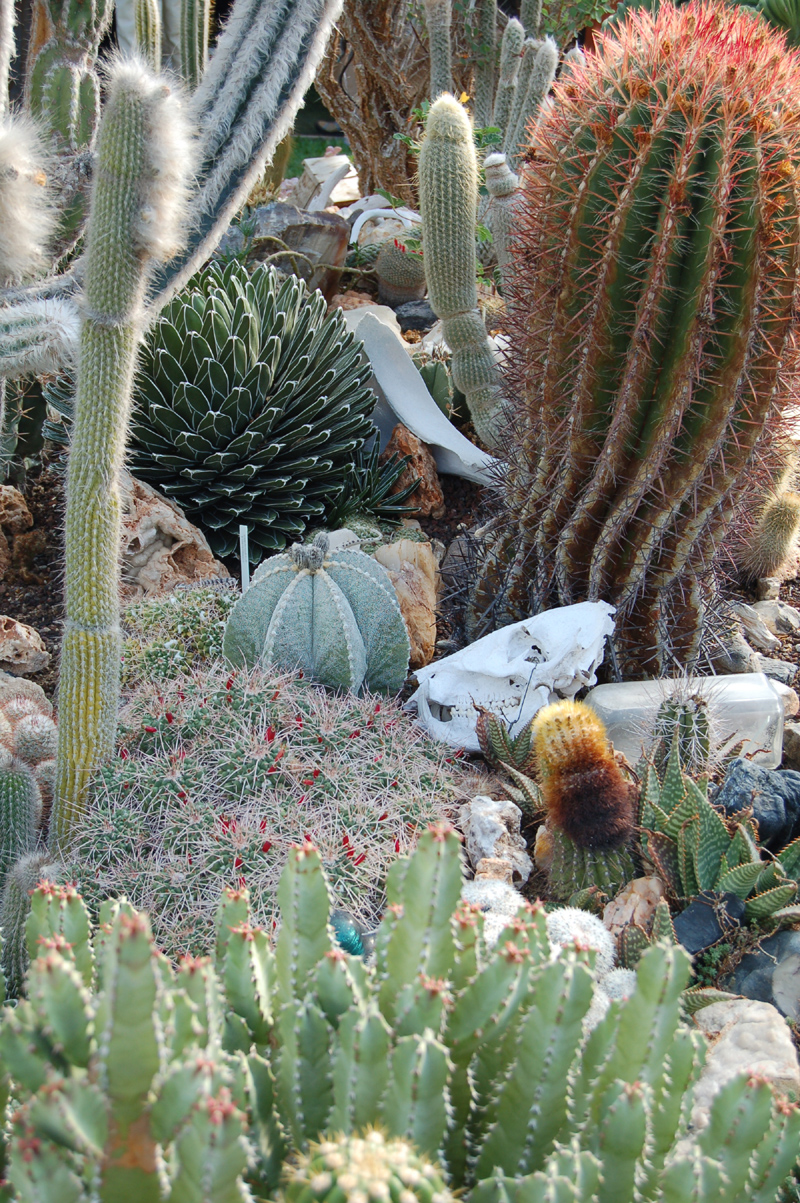 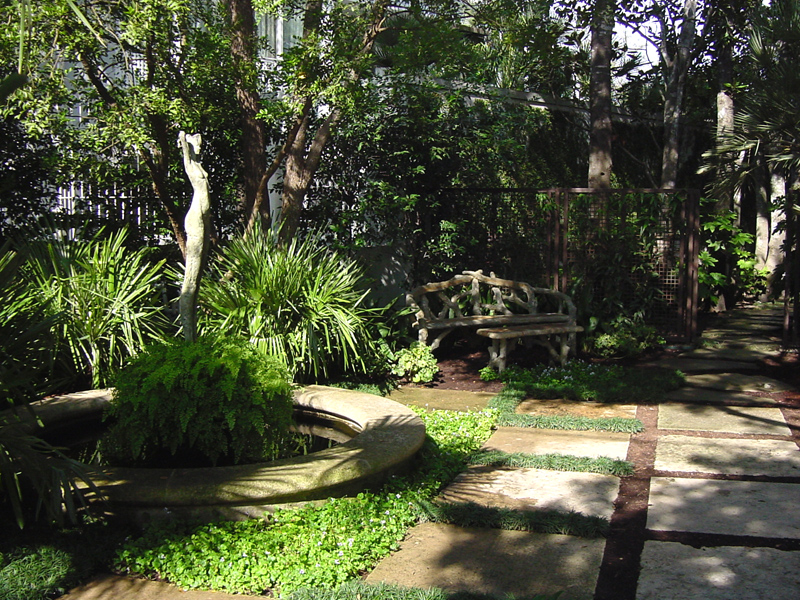 Her selections are magnificent, each unique in style, technique, and hands-on tactics. 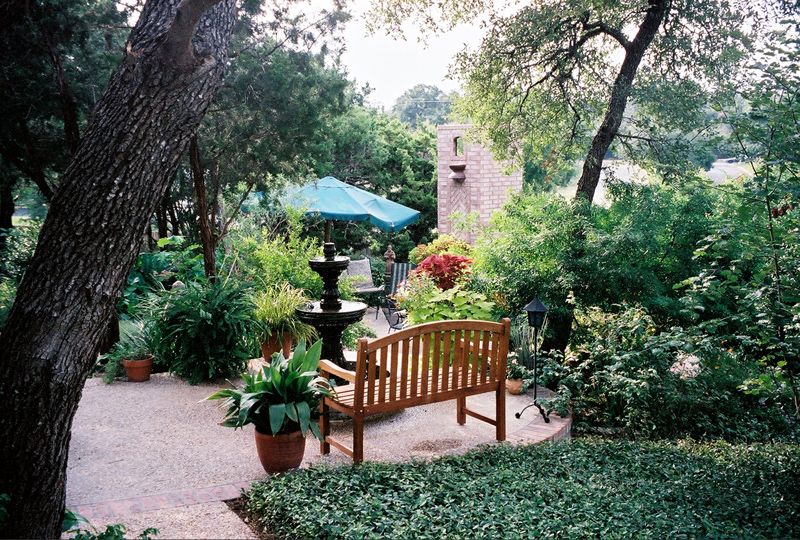 Ed Fuentes, Jerin Crandell, and I headed to SA last spring to tape one of them. The video will make you drool, so tune in! But you must go in person to meet the owner, Claire Golden, an activist I compare to gracious daredevils like Molly Ivins, Ann Richards, and Lady Bird Johnson.

In my garden, on Amelia’s semi-shady fence, the Plumbago scandens put on a few little flowers. 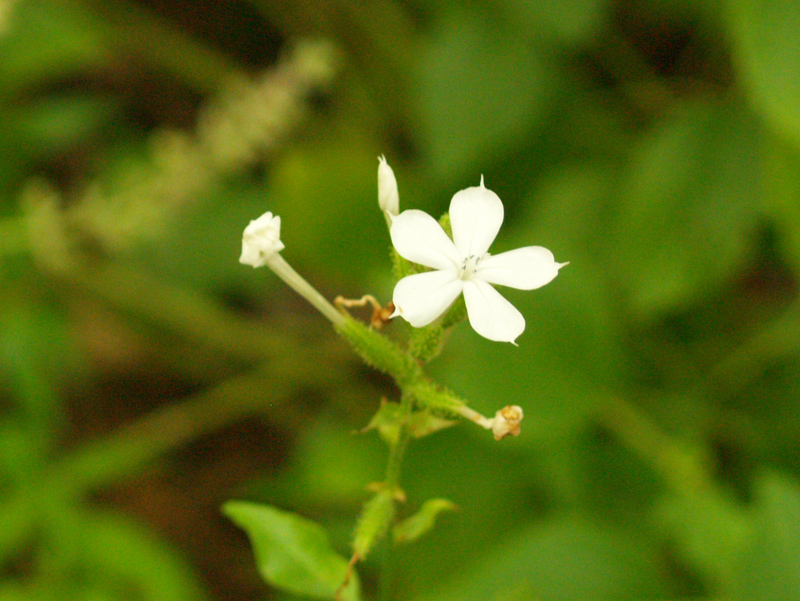 Since I got it at the Wildflower Center sale last spring, we’ve barely had rain in a harsh summer that tested its youth. Its valiance convinced me to add lots more, this time in clusters, for a really good photo op (with my eyes, if not the camera) in a couple of years. Shade, clay soil, low water, white flowers in summer and fall:  It’s a keeper! 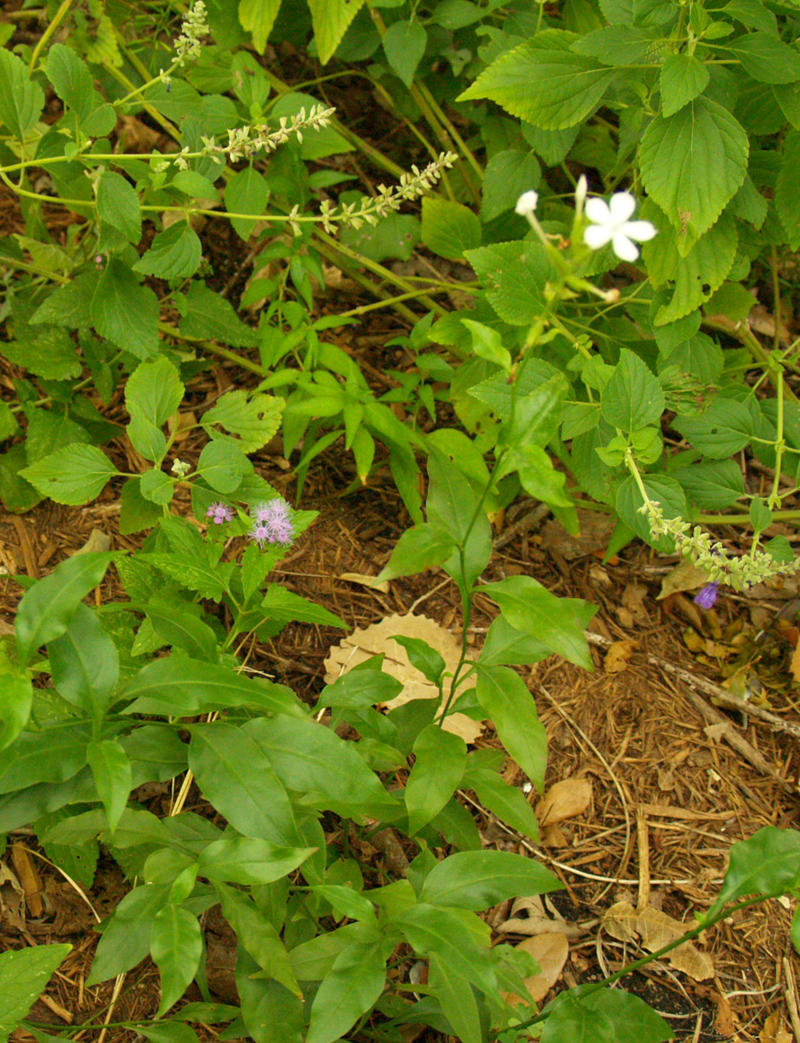 Another keeper is what is now called Conoclinium coelestinum, but I met it as a Eupatorium in a couple of gardens and had to have it. 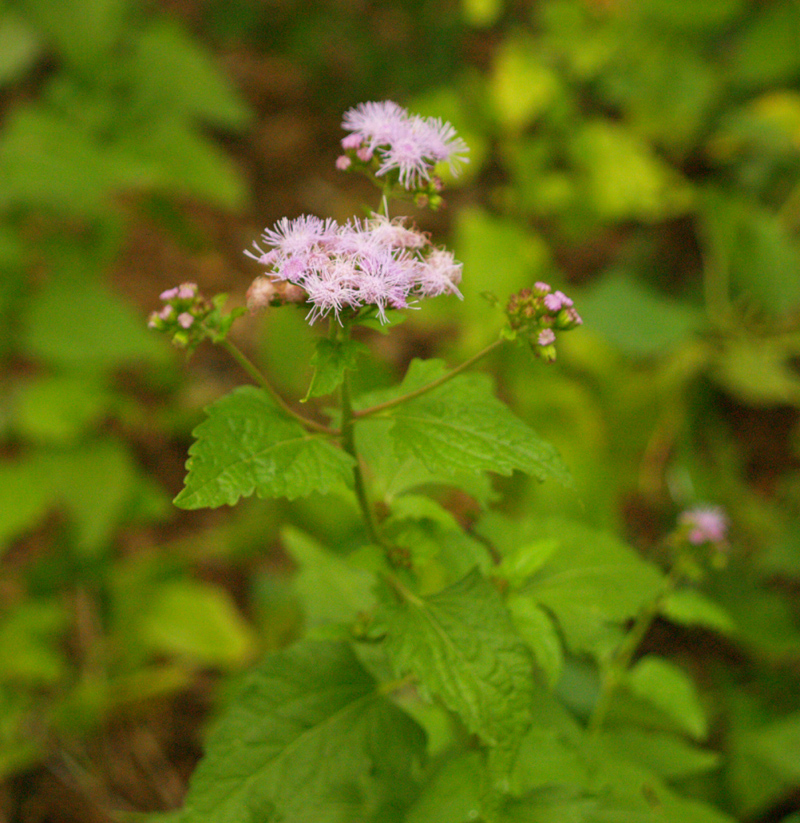 It makes a little shrub, as opposed to the groundcover, Gregg’s mistflower, now botanically Conoclinium greggii.  Pam Penick gave me a divided transplant last year, but I bought a few more at the Wildflower Sale.  Again, they’re just hanging in there after their tough introduction, but by next year, I know they’ll be significant in my semi-shady spots.

The BIG personal event this week was a visit from Renee Studebaker, Austin American-Statesman page designer/garden writer/Renee’s Roots garden blogger, and her partner, Joe Stafford, who arrived with a video camera. 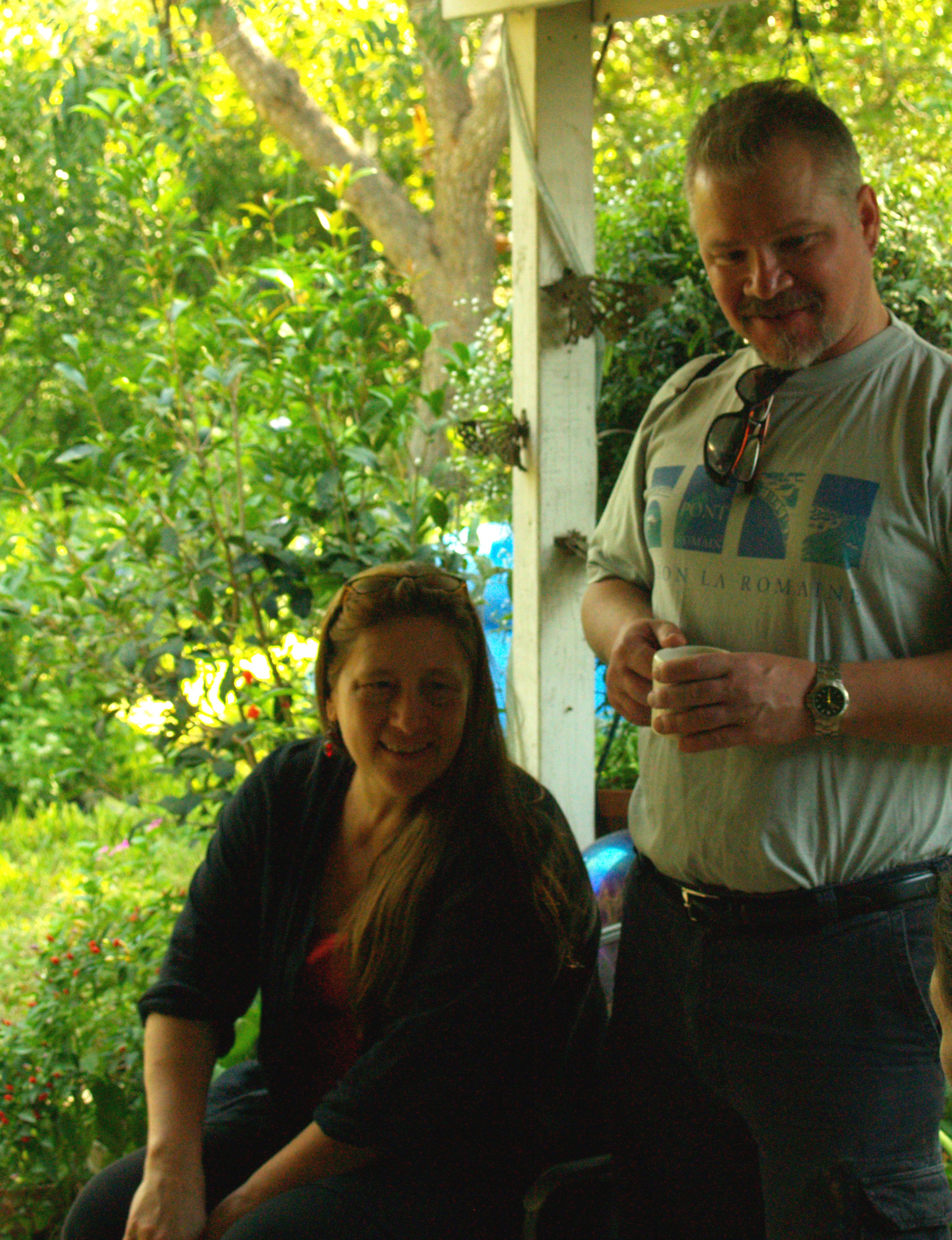 I’m terrified of “the media,” but I felt like I’d found another kindred hands-on gardener through her blog.  In person, Renee’s such a blast that when I wasn’t quaking, I was having fun hauling her around to ask advice.  And even though Joe’s also a Statesman page designer and videographer, Greg and I felt like we’d met new friends instead of “the media.”  Joe was very sweet when Harvey jumped straight up to the video camera and stuck his nose on the lens.  Thank heavens he didn’t toss it, which was his intention.  I can only hope that Joe has lens cloth to clean off bunny slobber.  This magic morning will be in Renee’s blog this weekend.

And on KLRU this weekend, also check out Atchafalaya Houseboat. This journey back in time goes deep into Louisiana’s million-acre Atchafalaya Swamp for an adventure with writer Gwen Roland, who 30 years ago built a houseboat by hand and lived as her forebears had generations earlier. Roland’s heritage provides an unusual backdrop for a universal story of self-discovery and the embrace of youthful idealism and a simpler life. It airs Saturday at 9:30 a.m. and 5 p.m. and on Sunday at 1:30 p.m.